Russia’s role in ongoing conflicts in South Caucasus countries is a critical factor in their response. 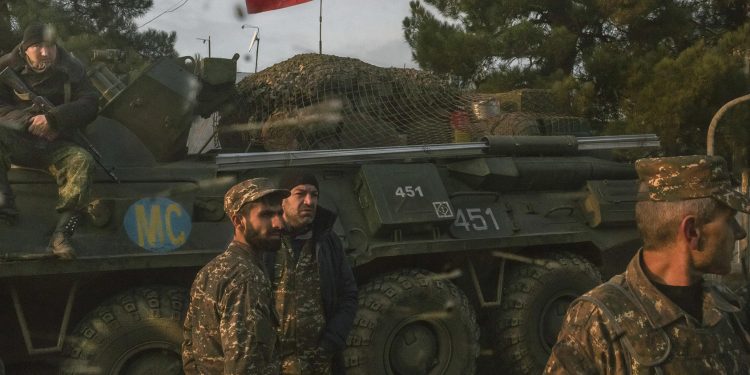 All the Armenians can do now is hope that the Russian peacekeepers will stay in Karabakh, and this will give them at least some balance of power

Since Russia’s invasion of Ukraine, Armenia, Azerbaijan and Georgia have tried in different ways to balance the need for good relations with Moscow with a desire to support Ukrainian territorial integrity and sovereignty. Each has reason to be cautious: Moscow has exploited ongoing conflicts in all three countries to dominate its self-defined sphere of vital interests. While these conflicts persist, Moscow will maintain significant leverage over Yerevan, Baku and Tbilisi. Working with them to resolve these conflicts and preserve their sovereignty should be a priority for the United States and Europe.

The Weight of the Nagorno-Karabakh Conflict

Russia plays an important role in the most volatile conflict in the region — that between Armenia and Azerbaijan over Nagorno-Karabakh. The decades-long war over this breakaway, primarily ethnic Armenian region in Azerbaijan flared up again in 2020, resulting in more than 1,000 casualties.

This conflict directly affects Armenia and Azerbaijan’s behavior toward Russia. On February 22, the day after Russian President Vladimir Putin recognized the independence of the breakaway Donetsk and Luhansk People’s Republics in eastern Ukraine, Azerbaijan President Ilham Aliyev traveled to Moscow to sign an agreement increasing the two countries’ military and diplomatic cooperation. As the U.N. Security Council condemned Russia’s actions in Ukraine, Aliyev’s actions appeared to indicate that Azerbaijan chose the Russian side in the conflict. Aliyev, however, denied this, saying the visit and the agreement had been planned long before the invasion of Ukraine.

Intentional support for Russia or not, by signing the “Declaration on Allied Interaction between the Republic of Azerbaijan and the Russian Federation,” Azerbaijan signaled the centrality of the Nagorno-Karabakh conflict in its relationship with Russia.

The agreement benefited Azerbaijan by committing the parties to “build their relations on the basis of allied interaction, mutual respect for independence, state sovereignty, territorial integrity and inviolability of the state borders of the two countries.”

This is important for a country with an ongoing territorial dispute with Armenia, especially considering Armenia’s membership in the Russia-led Collective Security Treaty Organization (CSTO). Despite Russia’s treaty obligations to Armenia, it was Russian arms sales to Azerbaijan that helped Baku successfully capture territory in the 2020 war, and it’s Russia that has negotiated several cease-fires throughout the course of the decades-long conflict. With Russian peacekeepers stationed in the territory, Baku cannot afford to alienate Moscow and risk having it tilt its support fully to Armenia.

At the same time, Azerbaijan has a historically strong relationship with Ukraine, which has voiced support for the integrity of Azerbaijan’s internationally recognized territory throughout the Nagorno-Karabakh conflict. As a result, rather than publicly supporting Russia’s war, Azerbaijan has been quietly sending humanitarian aid to Ukraine and allowing Ukraine’s military to obtain fuel from Azerbaijani-owned gas stations at no cost. Baku is thus trying to maintain a careful balance between these two important partners.  A clear indication of this effort was the Council of Europe vote terminating Russian membership — rather than vote to kick Russia out or to keep it in, Azerbaijan simply did not show up.

Armenia is in an even more difficult position due to the Nagorno-Karabakh dispute. A member of the CSTO, Armenia hosts more than 10,000 Russian soldiers, including a Russian military base, Russian border guards and a Russian peacekeeping force in the Armenian-controlled areas of Nagorno-Karabakh.

With Azerbaijan on one border and Azerbaijan’s ally Turkey (with whom Armenia has no diplomatic relations) on another, Armenia finds itself ever more dependent upon Russia for its security. Indeed, it was Russia’s intervention to negotiate a cease-fire that stopped the 2020 war that was threatening the “complete destruction of the surviving Armenian forces.”

As part of that agreement, Russia’s peacekeeping mandate only extends until 2025, at which point it might or might not be extended. Armenia needs to stay in Russia’s good graces to ensure its continued support for a cease-fire and negotiated settlement of the Nagorno-Karabakh conflict. The departure of the Russian mission would open the road for Azerbaijan to renew hostilities and retake all its lost territory.

At the same time, Armenia wants to maintain ties with the European Union (EU) and the West, but is not eager to support Ukraine because of Kyiv’s past support for Azerbaijan.

As a result, Armenia has sought to signal its support for Russia without alienating the West. Armenia voted against revoking Russia’s membership in the Council of Europe and abstained in votes suspending Russia from the U.N. Human Rights Council and condemning Russia in U.N. General Assembly. It has not recognized the independence of Ukraine’s breakaway regions, however, and is welcoming refugees from that war.

Georgia’s physical proximity to Russia has also placed it in a difficult position, but with slightly different challenges than those facing Armenia and Azerbaijan. Popular sentiment in Georgia favors Ukraine, with protesters taking to the streets to express their opposition to the Russian attack. The government, however, has taken a measured stance, aware of its vulnerability to Russian military actions. The conflicts over two separatist regions in Georgia are the root of this reaction.

In 2008, much like with Ukraine today, Russia invaded Georgia, recognizing the independence of two of its regions, Abkhazia and South Ossetia. Since then, Russia has fortified those areas, with more than 10,000 troops in South Ossetia and a military base in Abkhazia, and has used hybrid tools to undermine Georgian stability and make it more vulnerable to Russian aggression.

As a result, the Georgian government is hesitant to draw Moscow’s ire. After global sanctions were announced against Russia, Georgian Prime Minister Irakli Garibashvili declared them “not effective means” to stop the bombing of Ukraine and said Georgia would not take part in them.

Despite this, Georgia’s government prioritizes its relationship with the West. Like Ukraine, Georgia is pursuing both NATO and EU membership, formally applying for the latter on March 3. Georgia voted to expel Russia from the Council of Europe, for the U.N. General Assembly to condemn Russian actions and in support of the International Criminal Court’s investigation of alleged Russian war crimes. Garibashvili’s statements notwithstanding, the National Bank of Georgia indicated that it would not help Russia evade sanctions.

The persistent conflicts in Armenia, Azerbaijan and Georgia have left those countries vulnerable to manipulation and pressure from Moscow. Russia’s invasion of Ukraine has demonstrated how Moscow uses and fosters territorial conflicts to inflict catastrophic results on its neighbors. Resolving territorial disputes is key to not only ending persistent violence and bloodshed, but also enabling these countries to assert their sovereignty and pursue their own foreign policies.

Mary Glantz is the U.S. State Department Senior Fellow at USIP, where her work primarily focuses on analysis and policy recommendations regarding Russia’s role in the world.