Silk Way West Airlines (7L, Baku) has taken over both B747-400(FSCD)s formerly operated by Sky Gates Airlines (U3, Moscow Vnukovo) following their repossession and has since re-registered them in Azerbaijan, ch-aviation research has revealed. 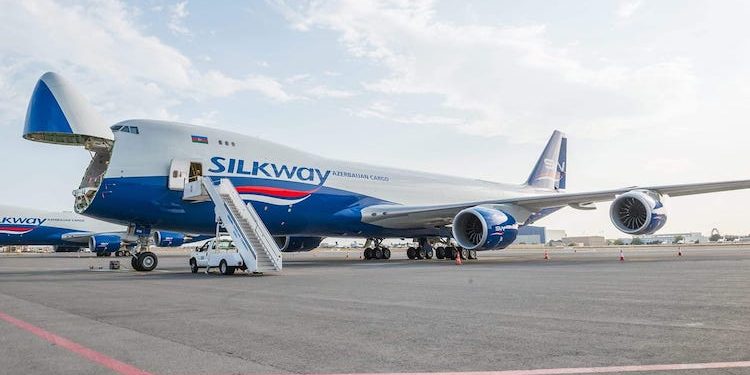 Cargo flights will be carried out following the so-called 'Fifth Freedom of the Air', according to which Silk Way West Airlines will transport some of the cargo from the US first to Tbilisi and then to Baku. Photo: Georgian Civil Aviation Agency.

VP-BCH (msn 30804) and VP-BCI (msn 32571) ceased operations for the Russian carrier on February 27, 2022, and were subsequently ferried to Baku. They resumed operations on March 8 and 9, respectively, as 4K-BCH and 4K-BCI and sporting Silk Way West Airlines titles. The aircraft are deployed from Baku to various destinations in Europe and Zhengzhou in China, Flightradar24 ADS-B data shows. Both were owned by Boeing Aircraft Holding, the ch-aviation fleets ownership module shows.

As Sky Gates Airlines does not operate any other aircraft, it is currently dormant. It is not clear if it harbours restart plans. It did not respond to ch-aviation’s request for comment.

Silk Way West Airlines confirmed to ch-aviation that the aircraft have been repossessed and moved to the Azerbaijani carrier on a permanent basis, and that there were no dealings between the airline and Sky Gates.

“Both aircraft have been registered into Azerbaijan Civil Aviation aircraft registry, where Silk Way West Airlines is the owner and operator of these aircraft. Silk Way Airlines and Silk Way West Airlines has stopped all their commercial activities in Russia as of February 25, 2022, and do not intend to come back to the Russian market. Moreover, SW West Airlines has stopped all operations within Russian territory, including overflights, tech landings and others. This decision is final and irrevocable,” Senior Vice-President Kamran Gasimov explained.

Russian airlines are currently struggling with the impact of far-reaching sanctions imposed on the country due to Russia’s invasion of Ukraine. Bermuda, where the two B747s were registered while operated by Sky Gates, has cancelled all certificates of airworthiness of aircraft operated in Russia. Russian airlines are also not able to operate in the airspace of the European Union, the United Kingdom, and the United States.

Azerbaijan, a former Soviet republic, has not joined international sanctions against Russia and has maintained a neutral stance. Although the country is more closely allied with Turkey, its relations with the Kremlin have been relatively close.