Armenia and Azerbaijan on Tuesday the 16th of November 2021 clashed along their border a year after the war over Nagorno-Karabakh came to an uneasy peace, trading accusations regarding which side initiating the clashes. 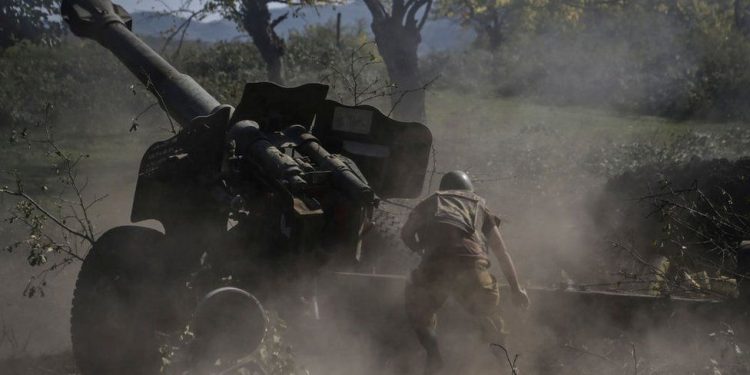 Armenia admitted that thirteen of its soldiers had been captured by Azerbaijan, that 24 were still missing and that one Armenian soldier was killed in action during the latest clashes, adding that its army had also lost control of two military positions. [1] [2] [3] On its part, Armenia claimed the destruction of five Azerbaijani AFVs and five vehicles. [4] According to Armenian Prime Minister Pashinyan, Azeri forces succeeded in taking control of a total of 41 square kilometers of Armenian territory since May 2021. [5]

Azerbaijan’s defence ministry meanwhile claimed that Armenian forces committed a large-scale provocation along the border on morning of the 16th of November, attacking Azerbaijani positions in the districts of Kelbajar and Lachin. [1] Azerbaijani troops ”stopped the enemy’s advance, surrounded and detained Armenian servicemen” it added. Armenia’s defence ministry said Azerbaijani troops ”attempted to break through Armenia’s state border, at the eastern direction” before being repelled by Armenian forces. Azerbaijan also admitted to suffering losses, including seven soldiers killed and ten wounded. [6] In return, Azerbaijan claims to have destroyed anti-tank and mortar installations. [7]

Armenia subsequently requested Russia to provide military support to help it in protecting its territorial integrity. ”Given that there was an attack on Armenia’s sovereign territory, we appeal to the Russian Federation to protect Armenia’s territorial integrity” said the Secretary of Armenia’s Security Council Armen Grigoryan. [1] Since last year’s war, Armenia and Azerbaijan have regularly exchanged fire along the border between both countries, sparking fears that a more serious escalation could soon occur.

A list of the destroyed and captured equipment of both sides can be seen below. This list is updated as additional footage becomes available. This list only includes destroyed or captured equipment of which photographic evidence or specific claims are available. Small arms and munitions are not included in this list. Equipment lost in clashes prior to the 16th of November 2021 is not included in the list. This list will be updated if additional footage ever becomes available.

Armoured fighting vehicles (2, of which destroyed: 2)

Trucks, Vehicles and Jeeps (2, of which destroyed: 1, abandoned: 1)

[6] The servicemen of the Azerbaijan Army became Shehids (Martyrs) during the battles https://mod.gov.az/en/news/the-servicemen-of-the-azerbaijan-army-became-shehids-martyrs-during-the-battles-38433.html

[7] Combat means of the Armenian armed forces were destroyed https://mod.gov.az/en/news/combat-means-of-the-armenian-armed-forces-were-destroyed-38412.html