Armenia has only pretended to think about the peace

Over the past few months, the situation in the South Caucasus region has begun to change rapidly. Great powers, countries of Asia and Europe, express their desire to strengthen and develop relations with Azerbaijan. 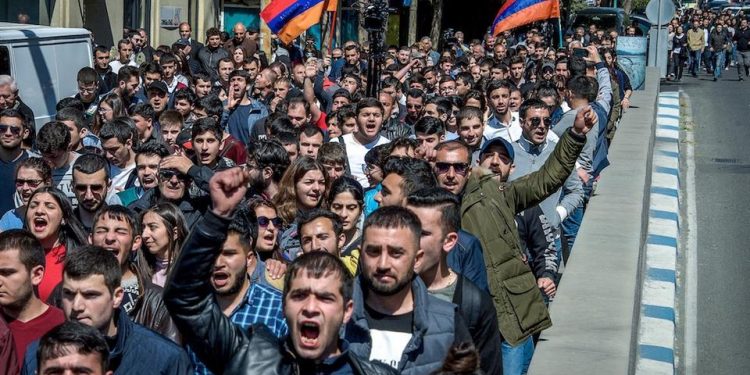 Pashinyan's plans for Armenian-Azerbaijani settlement met with protests in Yerevan

The reliability and desire of Baku to develop a peace agenda in the region has attracted wide attention. After all, immediately after the end of the 44-day Patriotic war, Azerbaijan made a proposal to Armenia to sign a peace treaty.

Hiding behind a peaceful agenda, Armenia continued to arrange military provocations both on the border with Azerbaijan and in Karabakh region of Azerbaijan. Armenia has not yet withdrawn its illegal armed formations from Karabakh, although it undertook the obligation to do so by signing a tripartite statement on Nov. 10, 2020, with Azerbaijan and Russia. Armenia did not provide accurate maps of minefields, and its sabotage groups have continued to mine Azerbaijani territories, resulting in the deaths of civilians, journalists and military personnel. Despite all this, Azerbaijan has persistently remained at the negotiating table with Armenia. Several meetings have taken place in Moscow, Sochi and Brussels. Türkiye and Azerbaijan have approached Armenia with sincere proposals to work on improving relations and opening borders in the future.

It is worth noting that the policy of the European Union has also changed dramatically. The situation around Ukraine, the need to look for new ways of supplying energy resources and transport communications with Asia seem to have impacted the EU, which has gradually overhauled its policy towards Azerbaijan. Acting as one of the effective platforms for negotiations, the EU has supported Azerbaijan’s aspirations for peace and reconciliation as well as for unblocking transport communications. During the last meeting, which took place on Aug. 31, with the participation of President İlham Aliyev, Prime Minister Nikol Pashinyan and President of the European Council Charles Michel, an agreement was reached to start work on a peace agreement. According to the press statement of President Charles Michel following the trilateral meeting, the sides “agree to step up substantive work to advance on the peace treaty governing inter-state relations between Armenia and Azerbaijan and tasked the Foreign Ministers to meet within one month to work on draft texts.”

Meanwhile, Armenia has concluded that there is no way back, that it is time to sign a peace agreement with Azerbaijan. No attempts to revive the OSCE Minsk Group have been successful. However, revanchist circles in that country are not interested in this, and in order to disrupt all peace negotiations, they committed a provocation on the border with Azerbaijan, on the night of Sept. 12 and 13. The divisions of the Armed Forces of Armenia committed a large-scale provocation in the Dashkesan, Kalbajar and Lachin directions of the Azerbaijani-Armenian state border. Nevertheless, this time, again, another Armenian military provocation was prevented. The Azerbaijan Army completed the assigned tasks adroitly and professionally in a short span of time. Together with the personnel, the military posts of Armenia, which attacked the positions of the Azerbaijani army, were destroyed. At the moment, the Azerbaijan Army controls all the main transport and communication hubs in the region and is ready to continue to ensure their stable functioning.

But, did it solve the problem in general? The short answer is “no.” The problem could only be solved when all Armenian armed formations are withdrawn from Karabakh, the official borders are delimited and demarcated, and a peace treaty is signed. No less important is the change in the approach of the world community to the situation in the South Caucasus region on the issue of Armenia. The problem of the world community is the same as it has been for the last three decades, double standards prevail. There was an attempt to violate the territorial integrity of the neighboring state by Armenia. As a result of another provocation, there are those who died in the Azerbaijani army, who gave their lives for the defense of their homeland, they died on their own land. Armenia violates all agreements and destabilizes the situation in the region, while intending to harm existing and emerging economic and transport projects. Azerbaijan, on the contrary, has done all it could to maintain peace in the region. Yet, in their statements, various politicians in a number of countries only call on the parties for peace. Justice and law could prevail in this world only when the world community learns to call the aggressors and occupiers by their proper names. Had the international community adopted an attitude conducive to peace from the beginning, the Second Karabakh War could have been avoided. As a result of the inaction of international structures, Armenia has become a country that understands only the language of force.

Türkiye was one of the first to sensibly assess the situation and made a statement. Thus, Foreign Minister Mevlüt Çavuşoğlu wrote on his Twitter account: “Armenia should cease its provocations and focus on peace negotiations and cooperation with Azerbaijan.”

If Armenia does not calm down, Azerbaijan is ready, as manifested numerous times, to flex its muscles again but surely, continual tension and war are in nobody’s interest. And there is certainly something that the international community could do to promote peace and stability in the region and beyond, that is, to counsel on Yerevan the language of calm and peace. It is high time to renounce revanchist policies and to get back on track for peace and reconciliation, the only policy option that would bring about the desired outcome for all in the South Caucasus.