The working visit of UN General Assembly President Abdullah Shahid to Armenia has become an occasion for an international scandal, in which this UN official was easily involved with the cunning inherent in the Armenian nation. The provocation did not work, but, as they say, the smell remained. 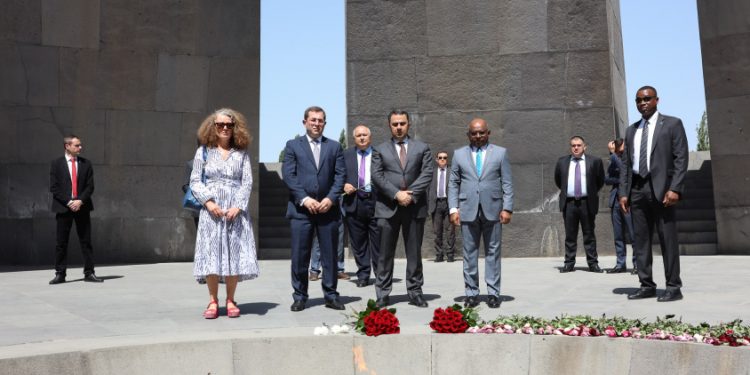 In principle, the UN administration could easily sue official Yerevan for pushing a representative of an organisation whose status is supposed to adhere to impartiality, avoiding any public support of nationalist ideas, into an ambiguous situation. It all started with the fact that Shahid, while in Armenia, visited Tsitsernakaberd, the so-called memorial of the “Armenian genocide”. Local “activists”, having calculated everything to the smallest detail, apparently, specially included a visit to the memorial in the programme of an influential international organisation high-ranking official’s trip.

It is clear that he did not come to Yerevan for this and simply followed the proposed regulations – in other words, Shahid was driven to the memorial without much explanation, handed a wreath and forced to pose for a reporting photo. The General Assembly president, obviously, did not read into the programme of the visit, hoping for Armenia’s correctness, it turned out – in vain, although this is exactly what the Yerevan schemers were counting on. The main thing is that his post with a message about visiting the “genocide” memorial and a photo soon appeared on Twitter, maybe even with the light hand of some assistant, instigated by “hospitable” hosts. Shahid, as they say, fell for the trick. And now it is possible to launch a media campaign, announcing with joyful cries that the UN General Assembly president “recognised the Armenian genocide”.

Shahid realised later that it was a pure provocation and he recklessly got into it, when a harsh reaction from outside followed in response to the publication, in particular the Turkish Foreign Ministry’s statement. Realising what was the matter, the UN official deleted his post a few hours later, however, giving the Armenian lobby an opportunity to enthusiastically talk about this topic for some time.

It is an obvious fact that the General Assembly president was dirtily involved in an Armenian scam. The Maldivian diplomat, who was born in a completely different part of the world, far from the Armenian information propaganda, probably did not hear anything about the fictional “genocide” and certainly did not read about it in school textbooks. Although, of course, as a representative of the UN, he should have been wary of such adventures from international Armenians. But Shahid, as an international official, turned out to be poorly prepared for such incidents, and more knowledge of the regional history could be useful to him.

But the Turkish Foreign Ministry immediately realised that this was nothing more than a favourite and many times tested the Armenian provocative technique.

“It is unclear why UN General Assembly President and Foreign Minister of the Republic of Maldives Abdullah Shahid visited the monument to the fictional ‘genocide’ during his visit to Armenia. The acting president of the UN General Assembly, implying neutrality, should have been attentive and acted responsibly,” the Turkish Foreign Ministry said in a statement about the incident.

The Turks also quite rightly recalled that persons representing the authorised UN bodies should act in accordance with the norms and rules of international law, as set out in the Convention “On the Prevention and Punishment of the Crime of Genocide” of 1948.

“We condemn and reject attempts to distort historical facts and international law by political manipulation,” the Turkish Foreign Ministry said in a document.

It is clear what kind of scam the UN official was involved in based on the Turkish side of the legal problem of this issue.

It is also interesting that such a provocation was foreseen in Türkiye. Ankara stated that Armenia “expectedly used Shahid’s visit” to present its “unilateral claims”.

There was no grandiose provocation. The Armenians miscalculated and the UN official, having seen the light, quickly deleted his post. And of course, I figured out what Armenian guile means. But one way or another, he got involved in an Armenian affair, and now the entire Armenian diaspora is pouring slops over him for the fact of removing the post. With the naked eye, it is clear that the Armenians are furious that the provocation failed in full and Shahid did not argue with anyone and enter into a polemic, but recognising that the matter was unclean, he simply deleted the fact of his presence at the fake “genocide” object. But the Armenians have already unleashed their advanced information pack – they have been given the command to poison the victim. That is Abdullah Shahid, who did not allow himself to be completely fooled. The Armenian National Committee of America (ANCA) even had the audacity to shame the UN General Assembly president for the deleted post.

So this is the very case when the UN leadership should seriously think about developing a certain scheme to prevent such nationalist antics and provocations. And to begin with, Abdullah Shahid, who somehow found himself in the centre of an international scandal, could himself sue the Yerevan authorities for deliberately and thoughtfully discrediting the image of the UN and him personally – which, by the way, is a clear international crime.