Armenia is allowed to be friends with Russia, Azerbaijan is not

The West encourages Armenia's permissiveness. Armenia is allowed what no other state in the world is allowed. 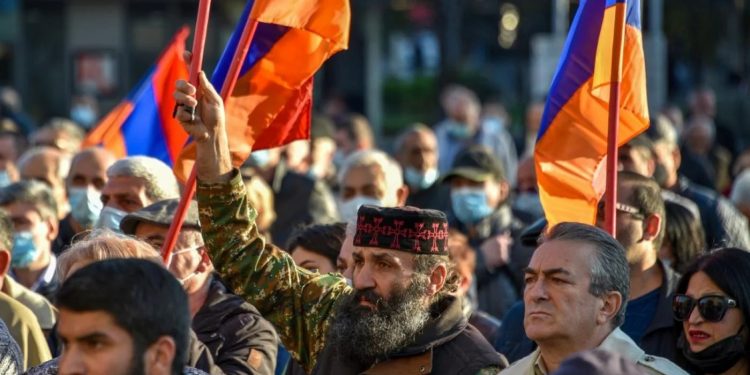 Armenia is an outlet for the Western world. Washington allows any government in Yerevan, be it the pro-Russian Sargsyan or the pro-Western Pashinyan, to violate the unthinkable red lines in human rights and democratic freedoms drawn for the rest of the post-Soviet world. Yerevan is being shaken by anti-government rallies demanding the resignation of Pashinyan and his government, and the leader of the Armenian velvet revolution has already resorted to the harshest forms of political repression. Mass detentions of unwanted activists and protesters began, with rabid police squadrons using violence against those opposing the government. An astonishing metamorphosis, but Washington and the democratic institutions of the Western world are still quiet about it. Engrossed in the Ukrainian drama, the collective West doesn’t or probably won’t take notice of this crackdown on universal human freedoms.

Pro-Western skeptics and dissenters can argue with the convenient point that the “pro-Russian masses” are being thrashed in Yerevan. And this completely suits Washington’s interests, especially in light of the Kremlin’s unlimited political interference in domestic political processes. The West is interested in clearing a toxic political field. Excuse me, but following this logic, how do we explain the violent reaction of the US Department of State and European institutions to the incidents in the recent past in the political life of Azerbaijan?

Whenever the authorities in Baku would corner a common pro-Iranian activist with ties to Al-Quds, IRGC or Ettela’at or summon a “fifth column” journalist armed with a brief course from United Russia for questioning, Washington would kick up a frantic fuss, accusing the Azerbaijani government of infringing on fundamental freedoms. Annual reports of the US Department of State are full of graphic facts about the protection of the rights of Iranian activists and pro-Kremlin propagandists in Azerbaijan. The Armenian reality, on the other hand, compels the West to take a vow of silence.

The West encourages Armenia’s permissiveness. Armenia is allowed what no other state in the world is allowed. At the climax of the Western world’s violent confrontation with Iran, Armenia expanded its strategic alliance with the theocratic regime in all areas, from finance and banking to transit and transport communications and energy imports.

For years, Washington and the EU not only took the antics of the Caucasian trickster with “special understanding and sensitivity” but also rationalized their strategic alliance with the “axis of evil” with the intention to save the long-suffering people. But the moment Azerbaijan joined the global transit projects in the direction of Iran, such as the North-South strategic route, and started financing the Azerbaijani part of the route, an angry Bolton immediately showed up in Baku with a disapproving grimace and curses on his lips.

The same thing is happening in the relations with sanction-stricken Russia. Pashinyan’s Armenia is at the forefront of the anti-Ukrainian movement. Yerevan helps the “occupation troops” with its air force, expresses ideological and political solidarity with the Donbass separatists, rushes its military units decorated with Armenian banners into battle against the Ukrainian democracy. The entire Armenian political establishment has joined the shameful anti-Ukrainian campaign, badmouthing the best sons and daughters of Ukraine standing in the way of the new “golden horde”. Washington fails to notice the Armenian media, just as it studiously ignores the mass rallies in support of the occupation of Ukraine in the center of Yerevan.

A shocking fact: the priests of American democracy made nothing of Armenia’s despicable participation in the velvet coup in Kazakhstan and the overthrow of Nursultan Nazarbayev. And it was Pashinyan, bolstered by Armenian weapons and political interference, who led the process of ousting the self-sufficient national leader and contributed to the coming to power of a pro-Russian group. The leader of any other post-Soviet country would have paid the price and become an outcast to the West after this vile annexation. Not Pashinyan. He gained even more respect in the Washington and Brussels offices. They patted him on the shoulder and thanked him for his flexibility.

Now recall Washington’s frenzy, extreme rage and hysterical anger at the signing of the allied cooperation treaty between Azerbaijan and Russia. With one stroke of a poorly sharpened pencil, Washington’s handlers of the Caucasus instantly assigned Baku to the Kremlin’s zone of influence and put the independent policy of the leader of the Non-Aligned Movement on trial before the Western public. Speculations and traitorous whispers behind the scenes followed, and the media erupted into a new fit of hysteria.

Washington persistently pursues its harmful policy, causing Baku’s resentment. The Armenian foreign minister is welcomed at the US Department of State with open arms, and Armenia, this feckless strategic ally of theocratic Iran and totalitarian Russia (at least this is how the liberal circles in the collective West refer to these countries to this day) is a guest of honor at summits for democracy. Biden eagerly shakes Pashinyan’s hand, ignoring the old and fresh blood stains on his jacket. It is the blood of Kazakhstani protesters, Armenian activists, Ukrainian fighters….

Baku sees it all and takes notes.