There is a Russian saying, "one learns from one's mistakes". But Otto von Bismarck said: "Only a fool learns from his own mistakes." 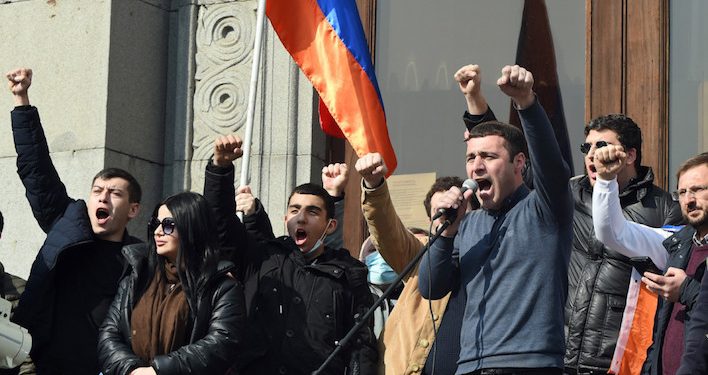 The wise man learns from the mistakes of others”, and this quote expands the idea, making it clearer and easier to understand.

However, sometimes people are unwilling to learn from either their own mistakes or the mistakes of others. What would be the appropriate definition in this case? The answer did not take long to find: the ” Armenian disease”.

Brightest medical minds have not yet taken up the study of this phenomenon, which is unfortunate: research in this area would surely lead to many discoveries in psychiatry.

Even with the experience of the Third Reich as a sad example right before their eyes, not only did Armenians not want to learn from the Führer’s criminal mistakes, but they also built for themselves Nzhdehism, an ideology all too similar to Nazism, and continued on the path of fascism.

During Soviet times, Armenians lived by Soviet laws only for show, nurturing deep down the delusional Nazi ideas of the fascist henchman Garegin Nzhdeh: “Lebensraum”, racial superiority, the Aryan race, and so on, in the best traditions of Adolf Hitler.

The sown seeds of hatred for Turks and Azerbaijanis sprouted in the late 1980s, resulting in a decades-long occupation of 20% of Azerbaijani lands, Khojaly genocide, and thousands of Azerbaijani civilians murdered by Armenian fascists.

The Hay life doctrine bequeathed by Garegin Nzhdeh expired ingloriously in the fall of 2020, when Azerbaijani soldiers defeated the Armenian invaders and forced them to surrender. And yet, as current events show, the “Armenian disease” still won’t let our unfriendly neighbors learn from their mistakes. They keep falling into the same trap with the obstinacy of the proverbial animal.

For some time now, a certain stratum of the Armenian society, the self-proclaimed revanchists, has been trying to bring the 1990s back. Waving the slogans “Let’s return Karabakh”, they refuse to accept the new geopolitical landscape that emerged in the region after the 44-day war.

The revanchists are trying to play a new game with the old—and marked—cards. In gambling terms, the Armenian revanchists with a six (not even a trump six) are going up against Azerbaijan, who has a trump ace.

Of course, the Armenian opposition is well aware that they have no hope of winning in this situation, but there is always a chance to play on the feelings of the domestic audience, appealing to the roots of Nzhdehism in order to return to the coveted power. However, even this option is not yielding tangible results, and the revanchists’ “patriotic” calls are the voice of one crying in the wilderness.

One of these voices is Eduard Sharmazanov, spokesman for the Republican Party of Armenia.

“The current authorities have abandoned the pursuit of international recognition of the ‘Armenian genocide’ (quotation marks here and elsewhere are editorial), the ‘independence of Karabakh’ and everything that we consider national,” he said at a meeting with journalists.

Sharmazanov called on everyone to gather their thoughts, awaken the sense of national dignity in themselves and those around them, and stand up to defend the Armenian nation. “At the end of the day, we have only one ultimate priority: the preservation of Armenia. And I say this with great regret. And the Karabakh issue is not just about Karabakh itself. ‘Former president’ of Karabakh Bako Sahakyan once voiced a very interesting and astute idea: ‘There is no Karabakh issue. There is a Karabakh manifestation of the Armenian issue.’ So, the Karabakh issue is not just about self-determination,” he said.

As we can see, the old moth-eaten pseudo-patriotic songs about Karabakh, the “Armenian genocide”, etc., are back on.

Trapped in the “Armenian disease,” the so-called saviors of the nation became entangled and stuck in the web of the mythical past. To Armenians, the driving force for the future is crying and mourning for the past. The “Armenian genocide”, Karabakh—this is all Armenians can give to the world. That is, in words, of course.

The pragmatic international community and, in fact, ordinary Armenians do not need ephemeral ideas, they need concrete steps in the present.

Blockaded, cut off from all regional transport and energy projects, Armenia is of no interest to anyone. The country currently exists on the political map of the world in name only. And it is not unlikely that it will soon disappear from the map of the world altogether. Unless common sense prevails, and Armenians slam the door to their celebrated, albeit fictional, past forever.