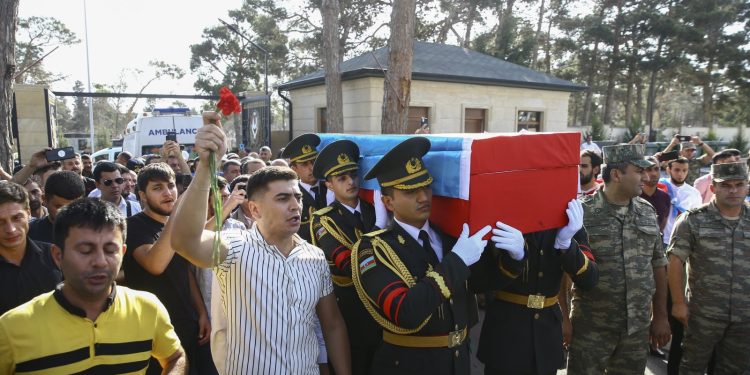 Azerbaijani officers carry the coffin of their comrade Sabuhi Ahmadov during a mass funeral for troops killed during clashes on the border with Armenia, at the cemetery near Baku, Azerbaijan, Sept. 14, 2022. (EPA)

Speaking at a news conference to commemorate the second anniversary of the “Patriotic War” in the Karabakh region, Ambassador Khazar Farhadov said that Armenia is not interested in peace.

Farhadov said Azerbaijan offered Armenia peace immediately after the war despite the 30-year occupation of its lands, suffering of its people, demolishing of historical and religious monuments, razing of cities to the ground and the million mines planted.

He added that within a few months, Armenia committed repeated military provocations against Azerbaijan.

So far, more than 240 Azerbaijani citizens have been killed or seriously injured due to land mine explosions since the war ended, he said.

Relations between the former Soviet republics of Azerbaijan and Armenia have been tense since 1991, when the Armenian military occupied Karabakh, a territory internationally recognized as part of Azerbaijan, and seven adjacent regions – Lachin, Kalbajar, Aghdam, Fuzuli, Jabrayil, Qubadli and Zangilan.

Azerbaijan then launched a counteroffensive operation, later dubbed “Iron Fist,” which led to the 44-day conflict ending with the liberation of Azerbaijani lands from the occupation of the Armenian forces. The fighting ended with a deal brokered by Russia.

“The Patriotic War put an end to Armenia’s nearly 30-year-long policy of aggression. Azerbaijan ensured its territorial integrity, and the fundamental rights of nearly one million displaced Azerbaijanis were restored,” said the ambassador.

“Azerbaijan alone ensured the implementation of the relevant U.N. Security Council resolutions of 1993.”

He added that the Azerbaijan government allocated nearly $3 billion to the large-scale reconstruction and restoration work in the liberated lands.

Fuzuli International Airport, which was built just in eight months, is now operational while two more international airports – Zangilan and Lachin – are under construction and will be operational very soon, according to Farhadov.

Azerbaijani internally displaced people have already returned to Aghali village in the liberated Zangilan region, which was rebuilt on the “smart village” concept, he added.