Threatening statements come from both the Defense and the Foreign Ministries. 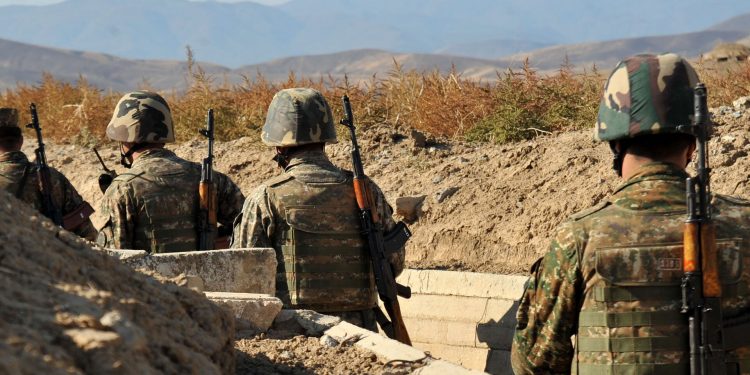 Armenia continues to aggravate the situation on the state border with Azerbaijan. Reports about the shelling of the Azerbaijani army positions come with alarming regularity. The enemy activity is suppressed by return fire and there have been no casualties among Azerbaijani military personnel.

But, first of all, playing with fire on the border is a priori very dangerous. And secondly and most importantly, the provocative fiddling on the border is accompanied by very dangerous statements by the political elite. Armenian Deputy Defense Minister Arman Sargsyan commented on the incidents in a very peculiar way: well, our (i.e., Armenian—Ed.) border has changed, mind that the entire border line has changed, and added that “we cannot rule out the possibility of shooting happening in other places as well. There were weeks when fire were opened every day.”

Here, with some political naivety, one could still come up with a reassuring interpretation. But back at the end of June the Armenian Foreign Minister Ararat Mirzoyan was scaring the faint-hearted public in an interview with the Greek Kathimerini: “Now that the attention of the entire world is focused on Ukraine, Azerbaijan may attempt to start a large-scale provocation at any moment. Therefore, it is imperative that the international community take effective steps to prevent attempts to destabilize the situation in the South Caucasus.” Translation: it is Armenia that appears to be plotting that very large-scale provocation. And the authorities are already preparing the public opinion for the efforts to shift the blame. Most importantly, they are again calling on the international community to keep Azerbaijan in check and secure the coveted advantage for Armenia.

This is not the only red flag. Political scientists, experts, opposition MPs are talking about a new war… Lastly, there is another thing: Armenia is not very happy, to say the least, with its current position in the negotiations, where we have to discuss the delimitation and demarcation of borders, which means once again losing illegally “Armenianized” Azerbaijani territories and getting ready to return the city of Lachin and the village of Zabukh under Azerbaijan’s control. Most importantly, there is no chance to put the “status of Karabakh” or anything else of the kind back on the agenda. Yerevan officials is beginning to realize that the reconciliation will have to happen on Azerbaijan’s terms, and they will hardly be greeted with flowers and cheer in Armenia itself.

So, is Armenia once again planning to turn the tables and choose war over disadvantageous negotiations? This is exactly how official Yerevan behaved on the eve of the 44-day war. And now they want to do it again? Forgetting the 44 days of uninterrupted offensive and their own defeat? There is an old rule that generals often prepare for the last war, but thinking in terms of the war before last seems a step too far.

Of course, Armenia has a context of its own. First, they still live on the promises made on the eve of the World War I, remaining fully convinced that many countries owe special obligations to the “small but proud, long-suffering Armenia” and refusing to see that against the background of the war in Ukraine, possible “foreign sponsors” of the confrontation with Azerbaijan have more important things to worry about than Armenia’s whims. And second, the local elite, how should we put this politely, is not very good at drawing conclusions from the slaps, blows and kicks it has received. Most recently, Armenia failed to learn any lessons from the April 2016 clashes. Military experts were talking about the growth of Azerbaijan’s potential, about Baku bringing a completely different army to the fore… Meanwhile, Yerevan kept saying like a mantra that “we destroyed the Yashma special forces”, that “Azerbaijan had one trained regiment, and we crushed it”, and in general, if the hostilities had not been stopped on Russia’s behest, the “zinvors” would already be drinking tea in Baku. And they fell for this PR campaign so hard that they started a new war four years later and lost it. Today they are reverently listening to experts like the Vice President of Russian Academy of Rocket and Artillery Sciences (RARAS) Konstantin Sivkov, who on the heels of the 44-day war was telling everyone that the war in Karabakh had ended in a “draw”, that Armenia had not lost, etc. In this situation, Yerevan might indeed try to stir up a new conflict in the region.

In light of these plans, the initiative of Armenian Prosecutor General Artur Davtyan to establish in that “country of victorious kebab democracy” strict control over information in the web and set up an agency similar to the Russian Roskomnadzor looks like a bitter mockery. Apparently, a certain part of the Armenian political elite is already preparing to isolate the Armenian audience from real information and to launch “I am in Goris right now, and there are no Azerbaijanis here” kind of fakes.

This is what political foresight a la Yerevan looks like sometimes.