On November 26, the leaders of Armenia and Azerbaijan met for the second time since the end of the Second Karabakh War (September 27–November 9, 2020). 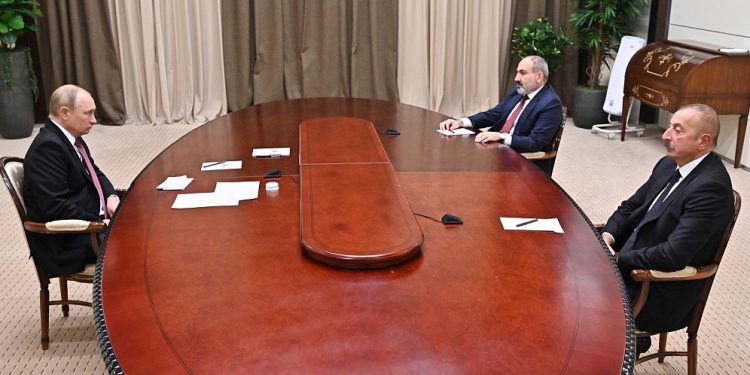 The meeting took place at the initiative of the Russian government in a similar way to the last trilateral summit of the leaders, in Moscow, on January 11 (see EDM [1][2], January 12). Their meeting was originally planned to be held on November 9 (the first anniversary of the end of 44-day war), but was later postponed at the request of Armenian Prime Minister Nikol Pashinian (Civilnet.am, November 23). On November 23, in a press conference live streamed on his Facebook page, Pashinian said he conditioned such a meeting to the discussion of “major issues,” including the fate of Armenian detainees held in Azerbaijan. He proposed a later date, since the 9th of November symbolized a “bitter and difficult day” for Armenians (YouTube, November 23).

Following the postponement of the meeting, tensions between Armenia and Azerbaijan escalated along their interstate border, leading to the worst clashes since the end last year’s war. As a result of intense fighting in the direction of the Kalbajar and Lachin regions, seven Azerbaijani service members were killed and ten were wounded, according to the country’s Ministry of Defense (Mod.gov.az, November 17). In turn, at his press conference on November 23, Pashinian said that at least six Armenian soldiers were killed and 32 captured during the incident (YouTube, November 23.)

The Sochi summit took place against the backdrop of these strained tensions but delivered promising outcomes for the prospect of future peace and cooperation in the region. On November 26, hours before the summit, Azerbaijan handed over one of those Armenian service members detained on November 16 (due to his health problems) along with one Armenian civilian who had mistakenly crossed into an Azerbaijani-controlled area in Agdam (Azernews, November 26). Earlier, on November 15, Azerbaijan’s Prime Minister Ali Asadov said Yerevan and Baku had exchanged a total of 122 soldiers since December 22, 2020 (Azernews, November 15). “Of these, 105 returned to Armenia and 17 to Azerbaijan,” he added. No agreements were announced at the Sochi summit about the fate of the rest of Armenian detainees in Azerbaijan; but at their press conference, the participating leaders said that the humanitarian issues had been discussed. “We have made some significant progress [in this issue],” Russia’s President Vladimir Putin told the gathered reporters (President.az, November 26).

The sides also apparently reached agreements on other contested issues, including the unblocking of regional transportation links and the delimitation/demarcation of the Armenian-Azerbaijani border. According to the trilateral statement issued after the trilateral summit, Armenia and Azerbaijan have basically recognized their mutual international borders and agreed to take measures to launch the delimitation and demarcation process (Civilnet.am, November 26). Putin announced at the press conference that the sides pledged to create a mechanism by the end of this year to carry out this process—which may also include the establishment of an international commission with the participation of Russia, as envisaged by the joint statement (President.az, November 26).

The Sochi summit joint statement does not offer many details about the decisions adopted by Aliyev, Pashinian and Putin, however. This is particularly the case regarding the promises to unblock regional transportation corridors. At the post-summit press conference, Putin simply promised, “Next week, the deputy prime ministers will summarize some of the results in Moscow and announce the decisions we have agreed on today” (President.az, November 26). In saying this, the Russian president was apparently referring to the Armenian-Azerbaijani-Russian working group established during the January 11 trilateral leaders’ summit and headed by the deputy prime ministers of the three countries (see EDM [1][2], January 12). The group was tasked with presenting action plans (including implementation schedules) to their governments regarding regional railroad and highway projects. Having met at least ten times since then, the deputy prime ministers may, thus, soon announce the outcomes of their work. The group is expected to inter alia reveal the final route for the Zangezur corridor—the land passage that will link the western regions of mainland Azerbaijan with its Nakhchivan exclave, via the southern regions of Armenia.

The trilateral statement issued at Sochi and the subsequent press conference conspicuously did not mention two other contested issues of the post-war agenda, however. First, none of the parties raised the question of Karabakh’s final status. In general, it now seems that even the Armenian side realizes it is no longer possible or reasonable for Yerevan to raise this matter in the way it had before. Prime Minister Pashinian’s characterization of the issue as a “matter of law” rather than a territorial dispute, not to mention his statement that Armenia has already recognized Azerbaijan’s territorial integrity back in 1991, when the two countries joined the Commonwealth of Independent States (CIS), have each signified a shift in the Armenian government’s narrative. Notably, Yerevan used to insist on the “remedial secession” of Karabakh (Civilnet.am, November 23).

Nor did the parties of the Sochi summit mention the Organization for Security and Cooperation in Europe’s (OSCE) Minsk Group—the international mission, co-chaired by Russia, France and the United States, tasked since 1994 in coordinating the Armenian-Azerbaijani peace negotiations. Although, Pashinian did briefly touch upon the group’s role during the three leaders’ joint meeting prior to the start of their behind-closed-doors talks (Primeminister.am, November 26). The summit, thus, once again demonstrated that the Minsk Group has a rather limited agenda in the existing context of Armenia-Azerbaijan relations; and hereby, the Sochi meeting reaffirmed Russia’s primary and unchallenged mediating position in the post-war peace process. Equally tellingly, no major decisions or documents are expected from the European Union–mediated meeting of the leaders of Armenia and Azerbaijan on December 15, in Brussels, planned to be organized on the sidelines of the Eastern Partnership summit (Civilnet.am, November 22). For now, Moscow remains in the driver’s seat when it comes to the Azerbaijani-Armenian conflict resolution process.