President Ilham Aliyev's visit to Brussels, his meeting with President of the European Council Charles Michel and Armenian Prime Minister Nikol Pashinyan and the results achieved are yet another diplomatic success for Azerbaijan. 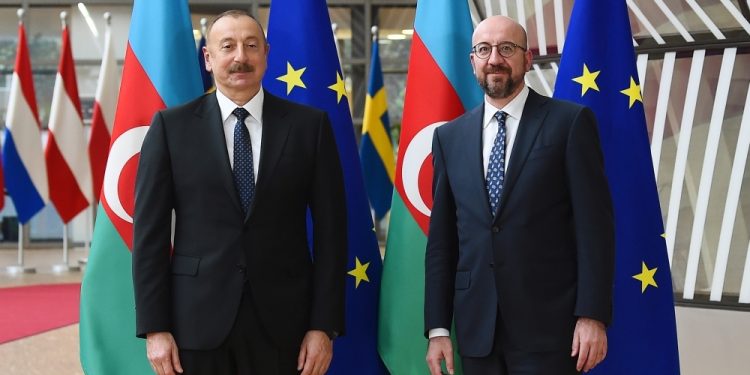 The statement made by Charles Michel after the trilateral meeting in Brussels is another indication that the world community has accepted the new realities brought about by Azerbaijan’s victory in the Patriotic War.

President Ilham Aliyev touched upon many important issues in his interview with Roberto Buongiorno of the Italian Il Sole 24 Ore in Cernobbio on September 2. The head of state stated that there are positive conditions for the signing of a peace treaty. This might yield results in the immediate future, provided that Armenia does not try to drag out the process yet again.

Member of the Milli Majlis Vugar Iskenderov told Trend that after the 44-day war, which ended with Azerbaijan’s historic victory, new realities had emerged in the region.

“The sooner the defeated Armenia accepts these realities, the better for it. Inappropriate stubbornness, attempts at revenge, and delaying the signing of the peace treaty further aggravate its position,” he pointed out.

The MP noted that attempts by the Armenian authorities, who are doing their best to delay the process to achieve a sustainable peace, are doomed to failure. “The fourth meeting, which took place on August 31, also ended in the failure of Armenia’s efforts. Azerbaijan, on the other hand, has taken a determined and fair stance. The forward-looking and wise policy pursued by President Ilham Aliyev delivers results in the international arena,” Iskenderov said.

He added that during every visit, at every international event Ilham Aliyev attends, in every interview with reputable foreign media outlets, the President of Azerbaijan voices his firm position.

Iskenderov stressed that the head of state had addressed these points in his interview with the Italian Il Sole 24 Ore in the city of Cernobbio on September 2. The President said that the situation in the region is developing towards peace. Speaking about the latest meeting in Brussels, Ilham Aliyev said, “We agreed that within one month foreign ministers of Azerbaijan and Armenia will meet in order to start practical discussions on peace agreement. That was our proposal from almost immediately after the second Karabakh war ended, we said that we need peace. We need a peace agreement and it took almost two years for Armenia to agree with that.” According to the President of Azerbaijan, this was one of the most important outcomes of the Brussels meeting. The head of state also said, “I think that we can finalize and sign a peace agreement within several months. I think this is realistic if the Armenian side expresses the same will, because we introduced five basic principles, which peace agreement should be based on and Armenia accepted them.”

The MP mentioned that one of the important points in the interview was also Azerbaijan’s implementation of large-scale infrastructure projects in the liberated territories, the issue of the Zangezur corridor. The head of the state said that the building of the infrastructure connecting Azerbaijan, Armenia and our other neighbors was part of the trilateral statement signed after the end of the war. Azerbaijan has already launched large-scale infrastructure projects in the liberated territories. The first international airport has been inaugurated. The runway of the second international airport is already operational and it will be inaugurated soon. Azerbaijan has built power plants and laid power lines; roads, tunnels, bridges and railroads are being built. All this work is being done not only to connect Azerbaijan with its neighbors and for internal use, but also to implement the Zangezur corridor, which will connect Azerbaijan with its Nakhchivan Autonomous Republic. Azerbaijan’s assertive position and President Ilham Aliyev’s forward-looking policy are bringing results, Iskenderov said.

Political analyst Elchin Mirzabeyli believes that the results of the fourth meeting in Brussels exceeded expectations, given Armenia’s behavior, as the latter keeps avoiding signing a peace deal.

“This meeting can be considered a success in terms of advancing and intensifying the process on the principles put forward by official Baku and accepted by the opposite side. One of the important points, and perhaps the most important one, is the agreement that the foreign ministers of Azerbaijan and Armenia will meet within a month to begin practical negotiations on a peace agreement. We can say that the fourth meeting exceeded expectations, given the behavior shown by Armenia to avoid signing a peace treaty and to ‘substantiate’ its claims, which do not reflect reality, such as the ‘unresolved conflict’, and given the numerous destructive attempts of regional and extra-regional actors, who are trying once again to turn the South Caucasus into a shooting range for their interests and to damage the peace process with this purpose,” he said.

Mirzabeyli indicated that he also considered the results of Operation Vengeance against provocations by Armenian separatist terrorist groups and illegal military groups to be important. He added that all attempts to drag out the peace process and change the regional agenda had failed.

The political analyst stressed that the statement of the President of the European Council mentioned neither Karabagh, nor the OSCE Minsk Group. “Essentially, it was once again confirmed that the format of the Minsk Group is now a thing of the past, and the issues pertaining to Karabakh are recognized as solely an internal affair of Azerbaijan. There is now a format of the EU’s mediation in the process of normalization of Azerbaijani-Armenian relations, and it is developing on the basis of the five core principles put forward by Azerbaijan. Progress in all the areas discussed at the meeting, including the issues of border delimitation, opening of communications, mine clearance, citizens of Azerbaijan who went missing in the first Karabakh war, can be regarded as an indicator that the process is moving forward with a positive momentum. I believe that the efforts of the President of the European Council in shaping the current atmosphere are also commendable,” he added.

The statements of the head of the Azerbaijani state demonstrate that Azerbaijan is striving for a prompt preparation of a peace treaty. It is through this process that a sustainable peace in the region is possible. As a result of President Ilham Aliyev’s balanced policy, Armenia has agreed that the foreign ministers of the two countries will meet within a month to begin practical negotiations on a peace agreement. Appropriate will and behavior are also expected from Armenia in subsequent processes. Stalling the processes and manufacturing artificial obstacles will be to Armenia’s detriment first and foremost.