Diplomatic arm-wrestling still continues between the sides after a 44-day war that ended with the decisive victory of Azerbaijan in the South Caucasus. After Azerbaijan’s President Ilham Aliyev’s statement that “we are ready to talk about the terms of the final peace agreement,” the parties, having mostly completed the first two stages, are discussing the terms of the third stage of post-conflict reconciliation. 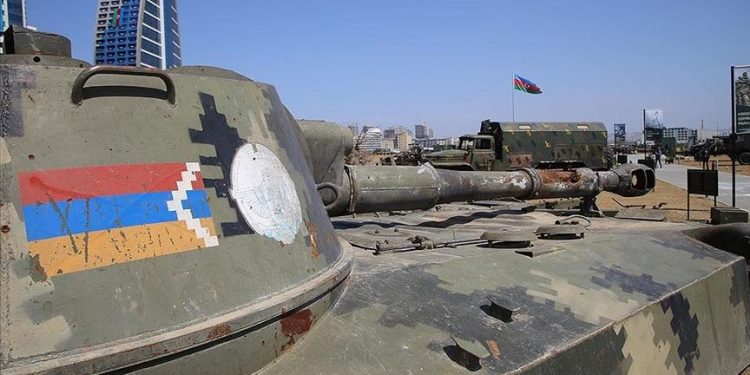 But in the post-war period, while clashes on the Azerbaijan-Armenia border still persist, diplomatic negotiations between the parties continue.

The November 10 declaration, which ended the 44-day war, is in fact not just a ceasefire declaration but an important document regarding the solution of the problem. Through this document, the liberation of more than 300 settlements by the Azerbaijani army was accepted by Armenia and, according to Articles 2 and 6 of the declaration, the decision was also made for Armenia’s withdrawal from the remaining three occupied regions (Agdam, Kalbajar, Lachin) occupied by Armenia. Article 4 stipulates the withdrawal of Armenian armed units from the regions that are under the control of Russian peacekeepers as well. Article 5 of the tripartite declaration established a monitoring center, operated jointly by Turkey and Russia, to monitor the fulfillment of the ceasefire in Azerbaijan’s Karabakh region. In accordance with Article 8, the parties exchanged the bodies of the slain soldiers and returned the hostages. Azerbaijan returned the bodies of over 1,600 Armenian soldiers and repatriated 70 prisoners of war. In accordance with Article 6, the Lachin corridor will be handed over to Azerbaijan and a new corridor will be constructed within the next three years.

According to Article 7 of the declaration, it was decided that the return of IDPs should be carried out under UN supervision. This matter, according to President Ilham Aliyev, will be handled in due time. One of the most pressing issues in completing the first stage is Armenia’s refusal to deliver mine maps; and, while there was speculation during Sergey Lavrov’s recent visit to Azerbaijan that Armenia would provide these maps, this issue has yet to be resolved.

Another issue remaining from the first phase is the evaluation of the status of Armenian soldiers who entered Azerbaijani territory after the Nov.10 declaration and were designated as terrorists, in accordance with international law, because they violated the declaration by entering Azerbaijani territory and killing soldiers and civilians. The Armenian side claims that these soldiers are POWs who should be returned as per the November 10 declaration.

Overall, it appears that the first phase is progressing as planned. Although some Armenian politicians and soldiers made revisionist remarks immediately after the war they are now starting to come to terms with the reality.

The second stage started to be implemented as a continuation of the first stage. According to Article 9 of the tripartite declaration, communication and transportation routes between the parties should be opened. As a result, on January 11, the parties signed a new declaration, and a committee comprised of the deputy prime ministers of Azerbaijan, Armenia, and Russia was formed. According to the latest information, the commission has held a total of eight meetings so far.

Experts, lawmakers, and the commission itself are debating the establishment of three transportation linkages. The first is the Zengezur Corridor, which runs between Azerbaijan’s main territory and its exclave of Nakhchivan. The second is between Armenia and Russia and passes through Azerbaijan, while the third involves the formation of a regional transportation network with the participation of Turkey, Iran, and Georgia.

According to President Ilham Aliyev, the establishment of this transportation link will improve the region’s chances of peace and aid in the prevention of new hostilities. However, this issue has sparked heated debate in Armenia ahead of the election. Experts believe this issue is being politicized by opposition figures ahead of the snap election. Nevertheless, despite the objections of the opposition in Armenia, the process on this issue continues. In his speech to the parliament, Acting Prime Minister Nikol Pashinyan reminded his opponents of the principle of reciprocity in diplomacy, stating that “If we don’t give them a transportation link, they will do the same.” Azerbaijan, for its part, has begun infrastructure work in preparation for the construction of these roadways. This situation will also have positive implications for the creation and normalization of Turkish–Armenian relations.

Third stage: Delimitation and demarcation of the borders

The third stage is the signing of an agreement between Azerbaijan and Armenia on the delimitation and demarcation of their borders. The border between Azerbaijan and Armenia has been under Armenian occupation for the last 30 years. After the liberation of Azerbaijan’s territories, more than 500 km of borderline have emerged between the two countries; that is why delimitation and demarcation are needed in these new borders. This issue came to the fore prominently on May 12 after the tension in the Karagol region, located between the Lachin region of Azerbaijan and the Sisyan region of Armenia. This tension arose after the visit to the region of Russian Foreign Minister Sergey Lavrov. According to local media, during Lavrov’s visit, a draft agreement was prepared between the parties to determine the borders. According to the draft agreement, which was published in local media, the borders between the parties will be determined according to Soviet-era military maps from 1975/6. Meanwhile, Armenia will withdraw its military forces from eight Azerbaijani villages, which are mostly enclaves still under Armenian occupation.

Speaking in parliament on the matter, Nikol Pashinyan stated that the most essential task for the Armenian people is to usher in a new era of peaceful development for their future. It also appears that Pashinyan has no choice but to find mutual solutions to the problems with Azerbaijan because attempts to internationalize the issue have not yielded any results.

Different types of reactions have been observed from the Armenian side in relation to this issue. Armenia has built a deep “security” platform as a result of its prolonged occupation of Azerbaijani territories. Unfortunately, due to the false comfort of occupation, Armenia illegally annexed many Azerbaijani villages and settled in them its own citizens. Now, the Azerbaijani army is directly confronted by such “Armenian” villages, and identifying borders using maps alone is proving difficult.

The fact that this situation coincides with the pre-election period in Armenia complicates matters even more. Pashinyan, who was blamed for losing the Second Karabakh War, is being further called out by his opponents for making more concessions.

Not only the opposition but also some government officials known for their radical rhetoric have criticized Pashinyan. According to local media, former Foreign Minister Ara Ayvazyan has refused to sign the agreement on border delimitation and demarcation. President Armen Sarkisyan stated that Armenian military forces must take harsh preventative measures against Azerbaijan during the demarcation and delimitation process. But the fact is that Armenia has no option but to find a solution to its problems with Azerbaijan and Turkey.

Obstacles to the final peace treaty

President Ilham Aliyev has stated that he has made proposals to Armenia on the terms of the final peace agreement, but Armenia has yet to respond. He has also emphasized that Azerbaijan is ready to talk about the conditions of that final peace agreement with Armenia. Azerbaijan’s condition for the ultimate peace deal is clear: The two countries must mutually recognize each other’s territorial integrity.

According to George Vanyan, an Armenian expert, the Armenian community is not yet ready for a final peace agreement. This is, in fact, a product of the radical and nationalistic sentiment fueled in the country by the rulers of Armenia over the past 30 years. As former Armenian President Levon Ter-Petrosyan stated: “No lessons have still been learned in Armenia and the diaspora … This suggests that the Armenian people are bracing themselves for more losses and sorrows.” Petrosyan is implying that the reconciliation process does not sit well with Armenia’s radicals and revanchists. That is why they are attempting to derail the peace process by inciting provocations. The international community must be wary of such provocations.