Relations between Azerbaijan and Iran have been tense in recent years, amid Azerbaijan's conflict with Armenia, close ally of Iran's. 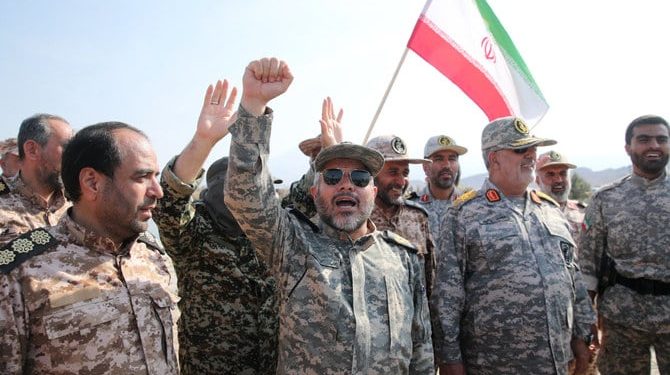 Iranian troops take part in a military drill along the borders of Armenia and Azerbaijan. (SEPAH News/AFP)

Azerbaijan’s State Security Service announced on Tuesday that it had arrested a group of Azerbaijani citizens who had been trained and funded by Iran’s intelligence service in order to act against the interests of Azerbaijani national security.

According to the Azerbaijani agency, the illegal armed group was secretly formed by Iran’s special intelligence service through the inculcation of “radical-extremist religious ideas.”

The members of the group, called the Muslim Unity Movement, were taken through various countries to Tehran and Syria in order to undergo military training and receive funding.

The group also brought books and videos which propagated “radical, religious-extremist attitudes against the ideas of modern development and a secular state.”

One of the suspects was arrested while “attempting a terrorist act” in a different country, according to the Azerbaijani State Security Service.

Relations between Azerbaijan and Iran have been tense in recent years, amid Azerbaijan’s conflict with Armenia, close ally of Iran’s.

In September, multiple editorials in Azerbaijani media called on ethnic Azerbaijanis in northern Iran to try separating from Iran, with Iranian officials warning against foreign efforts to disrupt relations between the two countries.

The articles cited a Turkish report by the Turkish Yeni Safak news site, linked to the Turkish government, which claimed that a former Iranian diplomat named Ebulfezl Zuhtevend made “scandalous statements” about Turkey and Azerbaijan in audio recordings.

Despite the articles, Azerbaijani officials have stressed that relations with Iran are still strong.

Mousavi had a hand in the tensions then, claiming in an interview with Al-Mayadeen news that there were 1,000 Israeli operatives and 1,800 ISIS ones in Azerbaijan and that Israelis with advanced equipment in Azerbaijan played a role in the assassination of Iranian nuclear scientist Mohsen Fakhrizadeh.

Close ties between Israel and Azerbaijan