Azerbaijan will oppose everything that is “normal” for France and Armenia

Modern French politicians do not like to recall the details of their state's colonial policy, which brought much suffering to other nations. 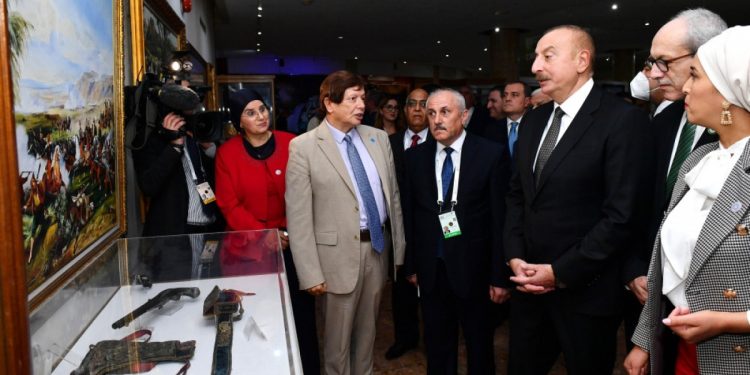 On November 1, 1954, the Algerian people began the liberation struggle against colonial policy, particularly that pursued by France. It is on this day that the 31st Arab League Summit is held in the People’s Democratic Republic of Algeria, with President of the Republic of Azerbaijan Ilham Aliyev invited as a guest of honor.

On October 31, the President of Azerbaijan Ilham Aliyev addressed a letter to the President Algeria on the occasion of the Algerian national holiday, Revolution Day.

“It is on the occasion of the National Holiday of the People’s Democratic Republic of Algeria—Anniversary of the Revolution Day that on my behalf and on behalf of the people of Azerbaijan, I offer my most cordial congratulations and best wishes to you and through you, your brotherly people. On 1 November 1954 the people of Algeria embarked upon a freedom fight against the colonialism policy. Notwithstanding unprecedented violence, atrocities, and war crimes perpetrated by the colonialist forces against your people, the will of the Algerian people remained unwavering, conversely boosting national unity and solidarity. The present level of relations between our countries, bound by the traditional ties of friendship and brotherhood, is gratifying, and we attach great significance to these relations. Throughout the years, the cooperation between Azerbaijan and Algeria has developed constructively in the bilateral and multilateral format. In this regard, I wish to highlight our engagement, within international organizations, particularly our cooperation based on mutual trust and support in the Organization of Islamic Cooperation and the Non-Aligned Movement. I believe that through our joint efforts, the Azerbaijan-Algeria ties and mutually beneficial cooperation will continue to strengthen and expand in line with the interests of our friendly countries and peoples. On such memorable day, I wish robust health, happiness and success to you and everlasting peace and prosperity to the brotherly people of Algeria,” the President stressed in his letter.

On the next day, November 1, our head of state arrived in Algeria and visited the Martyrs Memorial and the National Museum of the Fighters for Independence (Musée National du Moudjahid). While touring the museum, President Ilham Aliyev was informed that most of the collection of the museum, opened in 1984 and located within the Martyrs Memorial, is dedicated to the occupation of the country by France and the popular resistance against French colonialism in 1830-1962. Along with paintings, it displays weapons, archival materials and combat equipment, photographs and documents belonging to the Algerian Mujahideen who fought against colonialism, as well as the execution tool used by the French to punish the participants of the popular movement during the resistance. The personal belongings and weapons of Emir Abdelkader (Abdelkader ibn Muhieddine), who led the movement against French colonialism, and his portrait painted by the French artist Ange Tissier in 1853 and returned to the country by France only in 1976, are among the most visited collections in the museum.

Witness statements by more than 7,000 participants of the popular movement are collected in the museum. During the occupation in 1830-1962, the French mercilessly massacred more than 1.5 million people. This is why Algeria is called “a country of 1.5 million martyrs”. A total of about 10 million Algerians fell victim to the French colonialists.

After the tour of the museum, Ilham Aliyev signed the memorial book, leaving the following message.

“I am privileged to be visiting the People’s Democratic Republic of Algeria for the first time and the National Museum of Moudjahid as an expression of my deep respect for the brotherly people of Algeria. The National Museum of Moudjahid is an important complex that contains one of the most tragic and, at the same time, proud pages of the glorious history of the Algerian people. This museum is of exceptional importance in terms of preserving the memory of the colonial policy of unprecedented cruelty and violence against the Algerian people, war and crimes against humanity, the national struggle against colonial forces and the victory of independence won at the cost of one and a half million martyrs. It is important from the standpoint of passing it on to future generations. The struggle for freedom and independence, which started with the aim of getting rid of the merciless colonial slavery, is forever engraved in the history of Algeria as a symbol of great bravery, unity, unwavering will and determination of the Algerian people. As the leader of a friendly and brotherly country, I am very proud to see the development and prosperity of fraternal Algeria, which gained independence by making great sacrifices. I would like to express my gratitude for the warm welcome shown to me at the National Museum of Moudjahid and wish success to the museum in perpetuating the heroic heritage of the Algerian people,” President Ilham Aliyev wrote.

Of course, there is no justification for this policy pursued by the French. Azerbaijan understands the pain of the Algerian people very well, because our country, too, has experienced horrors of aggression. Armenia occupied Azerbaijani territories for almost 30 years. During the first Karabakh war, over one million Azerbaijanis became refugees. The war crimes committed by Yerevan run into thousands. These include genocide, murder, rape, theft… The Armenians brutally massacred Azerbaijani civilians, too. Even children and the elderly were among the victims. When the Second Karabakh War began, Armenia continued its monstrous crimes against humanity, bombing the civilian population. Moreover, the bombings were carried out in the middle of the night, as families, children, women, elderly people slept peacefully in their homes.

And today France supports Armenia. “Two peas in a pod”, as the saying goes. What else is there to talk about? One may say, in fact, that this is the norm for French politicians. How else to explain the support Paris shows to Yerevan? A country that committed genocide in various countries of the world, including Rwanda and Algeria, and accuses others of committing genocide on the basis of fabricated claims, can in no way show a fair position on the crimes of genocide, occupation, terrorism, vandalism committed by Armenia over the past 30 years.

Modern French politicians do not like to recall the details of their state’s colonial policy, which brought much suffering to other nations.

But we will remind them. During the entire period of French rule, several million innocent civilians, especially Muslims and Arabs, were ruthlessly murdered in various countries. From 1830 to 1962, French troops brutally slaughtered several million Algerians, destroyed and devastated mosques, and committed a terrible genocide against the Muslims of the Maghreb. Decades later, French colonial policy is remembered in a number of countries as a dark stain in the history of their struggle for independence.

Furthermore, getting back to the new reality in the South Caucasus, it should be noted that the biased position of Paris amid Azerbaijan’s attempts to secure peace, stability and growth in the region has completely discredited France as an important broker in the peace process.

France, who speaks of “human rights and freedoms”, “democracy” and the “right of peoples to self-determination”, still has colonies. The territory of the de facto colonies of modern France, scattered almost all over the world’s oceans, is 560,000 sq. km, and their population is larger than that of Armenia. Guadeloupe and Martinique in the Caribbean Sea, Guiana, Saint Martin, Saint Barthélemy, Saint Pierre and Miquelon in the Atlantic Ocean off the coast of South America, Réunion and Mayotte in the Indian Ocean, French Polynesia consisting of 130 small islands in the Pacific Ocean, Wallis and Futuna, New Caledonia are still considered “civilized”, “democratic” French colonies. Why will France, who speaks of some special “rights” for a handful of Armenians living in the territory of Azerbaijan in the area of temporary responsibility of the Russian peacekeepers, not give these rights to over 800,000 people of Reunion, and the 500,000-strong population of Guadeloupe, or grant independence to the island of Martinique with a population of 400,000?

This is a rhetorical question, because now this country is once again trying to interfere in matters that have nothing to do with it, matters involving other peoples and states, to stir up the issues that were taken off the agenda by the 44-day war, which resulted in the implementation of UN Security Council resolutions, and through diplomatic efforts, clearly aiming to hinder the peace process. France is a party acting in the interests of the Armenian lobby and takes Armenia’s side in all issues.

No one in Azerbaijan has forgotten or will ever forget France’s detrimental activities as one of the co-chairs of the OSCE Minsk Group for almost 30 years. In the current situation, France’s attempts to interfere in the Brussels format clearly stem from the intention of official Paris to protect Yerevan’s unjustified and illegal interests.

As a country that has committed genocide in various countries of the world, including Rwanda and Algeria, and accuses others of committing genocide on the basis of fabricated claims, France can in no way show a fair position in any matter where the territorial integrity of countries and the freedom of people are at the core.

This is why Azerbaijan will never stop fighting those who have committed or are committing war crimes and crimes against humanity. It is not for nothing that our country is currently chairing the Non-Aligned Movement: the fight against colonialism is at the root of the organization’s policy. We will oppose everything that is “normal” for France and Armenia.