The fall-out from the Russian invasion of Ukraine has impacted all countries across the region. Azerbaijan and the Central Asian republics have stepped up their co-operation using multiple formats. 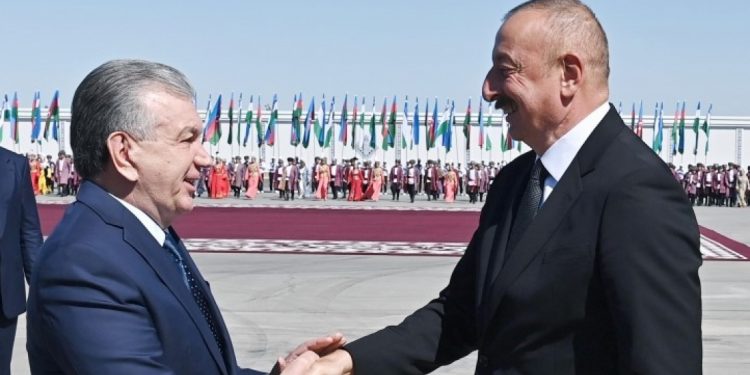 “Amid the present security challenges in the region it is high time for Azerbaijan and the Central Asian countries to deepen bonds and ensure their security and prosperity, writes Vasif Huseynov in this op-ed for commonspace.eu

As the Russia-Ukraine war enters its fifth month with no end in sight, almost all spheres of political and economic relations amongst neighbouring countries  are affected in a significant degree. One major implication of the war has been related with the ties between Azerbaijan and Turkic states in Central Asia.

The refusal of carriers to conduct operations via the Russian territories, its impact on the growing importance of the Trans-Caspian International Transportation Route (TITR), also known as the Middle Corridor, and the rise of the integration projects within the Organization of Turkic States (OTS) are only some of the factors that positively affect the relations between Azerbaijan and Central Asian states. The intensifying contacts and new initiatives between the sides are a manifestation of these new dynamics. Azerbaijan engages with the Central Asian states in bilateral, trilateral (together with Turkiye), and multilateral formats.

Azerbaijani President Ilham Aliyev’s visit to Uzbekistan in June was the latest episode in bilateral contacts in this context. In the course of the visit, the sides signed eighteen documents which deepened their strategic partnership and promoted relations in many areas including defense, transportation, and trade. According to the agreements, Uzbekistan and Azerbaijan, among others, will create a joint investment fund, intensify work on expanding cargo traffic on the Baku–Tbilisi–Kars railway, and establish a working group to eliminate obstacles to bilateral trade and transit of goods in a timely manner.

One major aspect of the Trans-Caspian relations is about Azerbaijan’s engagement with Central Asian also in a trilateral format, together with Turkiye. It is important to note that Baku has started to employ this format increasingly more with its major partners. For example, the Azerbaijan-Turkiye-Pakistan and Azerbaijan-Turkiye-Georgia formats have been tested and proved to be successful. Baku is now launching a similar format with Turkic countries from Central Asia.

The first such a contact was made with Turkmenistan in 2014 when the foreign ministers of the three countries met in Baku. There have been several such ministerial meetings of the sides since then. In early July, it was reported that the sides are preparing the first trilateral summit of the three countries’ leaders in the near future.

A trilateral cooperation format has also been recently launched amongst Azerbaijan, Turkiye, and Kazakhstan. In their first trilateral meeting in Baku on June 27, foreign ministers of the three countries signed the Baku Declaration on Cooperation in Transport and Communications spheres. The document stressed the importance transport corridors in the region should be fully operational.

Azerbaijan is planning to launch a similar format with Uzbekistan as well. In a telephone conversation on July 6, foreign ministers of Azerbaijan and Uzbekistan agreed to hold a trilateral meeting together with Turkiye in Tashkent. This format in Azerbaijan’s foreign policy and Turkiye’s participation in all of them, on the one hand, signifies the deep strategic bonds between Baku and Ankara, on the other hand, significantly strengthens Azerbaijan’s regional outreach.

The urgent need for alternative transportation and logistical routes due to disruptions along the trans-Russia route is one major element that is pushing the sides towards closer cooperation. The partnering countries take measures to boost the viability of the Middle Corridor, whose potential is estimated at 10 million tones or 200,000 containers per year.

According to official information provided by the Port of Baku, the recent events reversed a downward trend marked over the past three years in the trans-shipment of wagons. “From January through May 2022… the freight flow in the Baku port reached 2.2 million tons, up by nearly 20% against the same period of 2021 (1.8 million tons)”, it is reported. According to some estimations, cargo trans-shipment through Central Asia and the Caucasus will grow sixf-old this year compared to the previous year.

Baku aims also to attract at least 50 percent of the wheeled vehicle movement (TIR) between Central Asian countries and Turkiye (120,000 TIRs per year) – 20 percent passes through Azerbaijan at the moment. Not only does the transformation of the country into a major transportation hub produce financial revenues, but perhaps more importantly, it boosts Azerbaijan’s geostrategic importance in the region and internationally.

In the multilateral format, the major channel of Azerbaijan’s ties with Central Asia is the Organization of Turkic States (OTS). The bloc’s five members (Azerbaijan, Kazakhstan, Kyrgyzstan, Turkey and Uzbekistan) and two observer states (Turkmenistan and Hungary) are home to some 170 million people with an aggregate GDP of $1.5 trillion – which makes it increasingly important regional actor.

According to Dr. Farid Shafiyev, Chairman of the Baku-based Center of Analysis of International Relations (AIR Center) that hosted the think-tank conference of the OTS members on July 3, 2022, the Organization holds a significant potential to bring the member countries closer in major economic and geopolitical issues and promote solidarity amongst them against major challenges. Amidst the present security challenges in the region, it is high time for Azerbaijan and the Central Asian states to deepen bonds, and ensure their security and prosperity.

Dr Vasif Huseynov, Head of Department at the Center of Analysis of International Relations (AIR Center) and Adjunct Lecturer at Khazar University in Baku, Azerbaijan.