Azerbaijan Embarks on Construction of Nakhchivan Railway (Part One)

Since the start of the construction of the Horadiz–Agbend railway, however, the Azerbaijani and Armenian sides have voiced inconsistent messages about the prospects of the reestablishment of the Zangezur corridor. 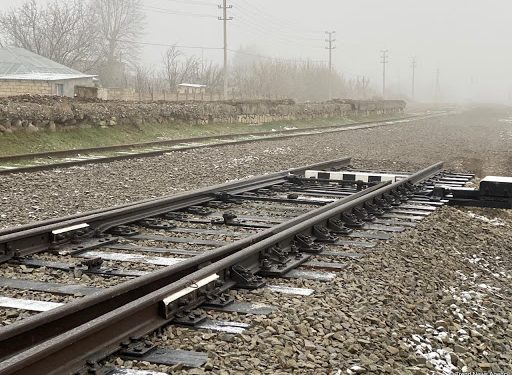 On February 14, President Ilham Aliyev of Azerbaijan, during his visit to the Azerbaijani territories retaken following the Second Karabakh War (September 27–November 9, 2020), ceremonially laid the foundation for a railway that, when completed, will connect the towns of Horadiz (Fuzuli district) and Agbend (Zangilan district) (President.az, February 14). Agbend is located in the southwesternmost part of mainland Azerbaijan, at the politically sensitive junction of the borders of Azerbaijan, Armenia, and Iran. The 100-kilometer-long Horadiz–Agbend railway constitutes a part of a larger project to connect Azerbaijan proper with its exclave, Nakhchivan Autonomous Republic, via the Syunik region of Armenia. Yerevan and Baku, reportedly with the insistence of the latter and through the mediation of Moscow, have agreed on the establishment of a land route between the two parts of Azerbaijan in the trilateral ceasefire deal of November 9, 2020, which concluded the 44-day war (President.az, November 10).

Speaking at the groundbreaking ceremony for the Horadiz–Agbend railway, President Aliyev underscored the “great importance” of the project for the transportation of passengers and freight to the liberated territories. “After a long hiatus,” he proudly declared, “Azerbaijan and its integral part of the Nakhchivan Autonomous Republic will be connected to each other by rail, thus achieving our strategic, economic and political goals” (APA, February 15).

This would indeed be a historic achievement for Azerbaijan as Nakhchivan has largely been isolated since the First Karabakh War of the early 1990s, which resulted in the termination of the land route linking mainland Azerbaijan and its exclave through the Syunik region of Armenia (also known as “Zangezur corridor”). This railway route, established during the Soviet period, had been entirely dismantled over the last three decades of Armenian occupation of Karabakh and surrounding Azerbaijani districts. The 43.4 km section of the railway that passed through Armenia from the Armenian border (Meghri district) to Nakhchivan and was owned by Azerbaijan Railways had not been in use since that time (Musavat.com, April 30, 2019). According to a report published in 2014 by the London-based conflict analysis organization International Alert, this section of the railroad includes four stations that “have been semi-derelict” for more than two decades. The railroad’s track bed has been ripped up, while key associated infrastructure, including a tunnel, “have fallen into disrepair” following 20 years of neglect (International-alert.org, July 2014).

Since the start of the construction of the Horadiz–Agbend railway, however, the Azerbaijani and Armenian sides have voiced inconsistent messages about the prospects of the reestablishment of the Zangezur corridor. “Armenia refuses to cooperate [in the opening of regional transportation and communication links]. Now they want to hinder the building of the Zangazur corridor,” President Aliyev revealed in his address to the seventh assembly of the ruling New Azerbaijan Party (YAP), last month. But he assured that “Yerevan will not be able to prevent this” (President.az, March 5).

Two weeks after this statement, on March 20, Armenia’s Prime Minister Nikol Pashinian, at a meeting with residents of the Armenian village of Nerkin Bazmaberd, declared passionate support for the opening of regional transportation channels. Assuring that this will be advantageous for both Armenia and Azerbaijan, Pashinian expounded that “This is beneficial for Azerbaijan because it should have communication with Nakhchivan. This is beneficial in Armenia because we need to obtain a reliable rail and land connection with the Russian Federation and the Islamic Republic of Iran. This means that the economy of our country can change significantly” (Armenpress.am, March 20).

In another meeting with the local Armenian community, on March 28, Prime Minister Pashinian once again underscored the importance of opening up transit channels with Azerbaijan for the Armenian economy. To support his claim, Pashinian cited the example of the copper ore mining industry of Armenia, saying that it would be “impossible” to modernize the industry and create capacities for smelting copper without unblocking regional transport infrastructure. “We must understand that we cannot get a path through the territory of Azerbaijan [to Russia and Iran] while, at the same time, refusing to give a path to Azerbaijan through our territory. We must be able to mutually use the existing routes,” Pashinian said, highlighting the importance for Armenia to look at the region “from a different angle” and also encouraging his country’s neighbors to “change their position in relation to Armenia” (Armeniasputnik.am, March 28).

Meanwhile, the tripartite working group, founded during the January 11 summit of the leaders of Armenia, Azerbaijan, and Russia and co-chaired by three deputy prime ministers of those states, is working to present action plans (with implementation schedules) to their governments regarding regional railroad and highway projects (see EDM, January 12). “We have already conducted several sessions. There are also functioning subgroups conducting expert activities dealing with the infrastructure’s technical properties, as well as legal, security and other issues. We planned to introduce a report by March 1, but it was not possible due to a need for certain additional work,” said Mher Grigoryan, the deputy prime minister of Armenia and Yerevan’s co-chair of the trilateral joint working group, during the government hour in the Armenian parliament, on March 24 (Tert.am, March 24). “The main discussions are about the resumption of transport and railways,” he said, adding, “In essence, we are discussing the possibility of unblocking all transit operating in Soviet times” (TASS, March 24).