Azerbaijan has been erasing traces of over three decades of Armenian occupation from the city of Shusha, considered to be the country's historical, cultural and arts capital. 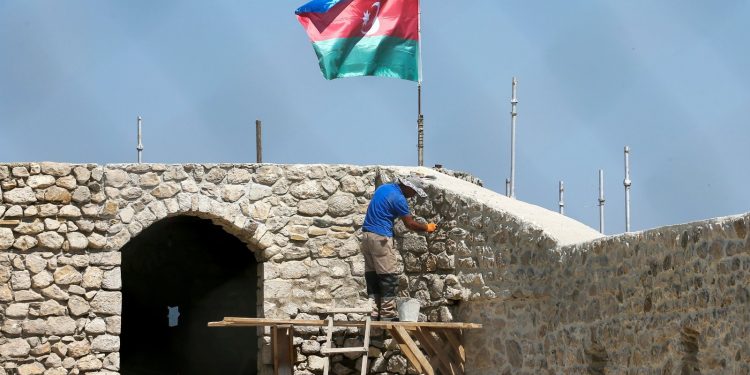 The Shusha Fortress under restoration. Large-scale construction and restoration of infrastructure facilities are underway at the territories of Nagorno-Karabakh that passed over to Azerbaijan after 30 years of Armenian occupation, July 4, 2021. (Photo by Gavriil GrigorovTASS via Getty Images)

While Azerbaijani authorities and authorities create an inventory of destroyed and damaged historical buildings in the city, the military has been clearing mines and improvised explosives planted by Armenians. Azerbaijan aims to restore and renovate the buildings and monuments after inventory work is completed, Hürriyet Daily News reported on Thursday. The historical church of the city, which had been damaged in bombing and shelling, is also being renovated.

Shusha, which the Armenian military had invaded on May 8, 1992, was liberated by the Azerbaijani military on Nov. 8, 2020.

Considered to be the “eye” of Nagorno-Karabakh, which Armenia had occupied until Azerbaijani forces’ two-month effort to liberate it, Shusha’s historical heritage includes many monuments, and it had been home to many intellectuals.

Azerbaijan has also been carrying out infrastructure and road work and has also constructed a hotel for visitors.

Elçin Ahmedov, who left the city 29 years ago at the age of 21, has returned to the city as a history professor and is taking part in the inventory and restoration works.

“They destroyed the house I was born in. The house is completely gone now. Armenia destroyed everything and erased the history of Shusha and Azerbaijan,” Ahmedov said, adding that the Armenian people also used mosques as barns and destroyed them.

The town has significant military value since it is located on strategic high ground about 10 kilometers (6 miles) south of the region’s capital over Khankendi (Stepanakert), and it is on the road linking the city with Armenian territory. Besides its strategic significance, the town is known as a symbol of Azerbaijani history and culture with many historical sites, the restoration of which has started. Many prominent Azerbaijani musicians and scholars were born in the city.

Relations between the former Soviet republics have been tense since 1991 when the Armenian military occupied Nagorno-Karabakh, a territory recognized as part of Azerbaijan, and seven adjacent regions. Fresh clashes erupted between Armenia and Azerbaijan in late September, rekindling the Caucasus neighbors’ decadeslong conflict over the region.

During the conflict, Azerbaijan liberated several towns and nearly 300 settlements and villages from the Armenian occupation. Fierce fighting persisted for six weeks despite efforts by France, Russia and the United States to broker cease-fires, before Armenia and Azerbaijan signed a Moscow-brokered peace deal on Nov. 9. The agreement was signed after Baku’s army overwhelmed separatist forces and threatened to advance on Karabakh’s main city Khankendi.