On 25 October, Ambassador Vaqif Sadıqov, head of the Mission of the Republic of Azerbaijan to the European Union (EU), presented his Letters of Credence to European Council President His Excellency Charles Michel. 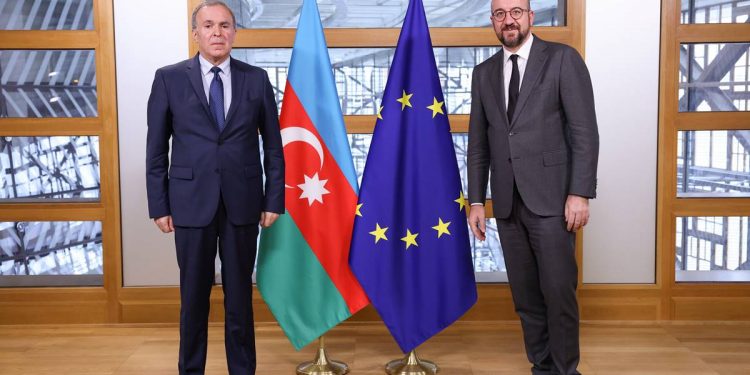 Ambassador Vaqif Sadıqov passed warm greetings and best wishes of President Ilham Aliyev to President Michel. He underscored the importance of the visit of President Michel to Azerbaijan last July in bolstering bilateral relations and strengthening dialogue on regional issues. Sides exchanged their views on the priorities of the Eastern Partnership beyond 2020 and the realization of the Economic and Investment Plan. The Ambassador conveyed Azerbaijan’s expectations of the upcoming Eastern Partnership Summit.

Ambassador Sadıqov expressed his hope on the soonest resumption of negotiations on a new Azerbaijan-EU agreement and reiterated the strong political will of Azerbaijan to conclude outstanding issues based on mutual compromises. Ambassador underscored successful cooperation with the EU in bringing the Southern Gas Corridor into fruition and stressed the potential of the delivery of natural gas volumes from Azerbaijan to wider European geography.

Ambassador Sadıqov informed President Michel about postwar developments in the region, including large-scale reconstruction and rehabilitation works carried out in the liberated territories of Azerbaijan. Recalling the statement of President of Azerbaijan, he emphasized that his country views the EU as a trusted partner. In this regard, the Ambassador welcomed the EU’s willingness to support peacebuilding efforts in the region. Mr. Charles Michel, President of the European Council asked the Ambassador to convey his warm greetings, best wishes and appreciation to President Aliyev. President Michel expressed his hope to see President Aliyev’s participation in the upcoming Eastern Partnership Summit.