A newly constructed Chabad House-Almaden Valley synagogue in San Jose, California was utterly destroyed in a fire on December 23, 2021. 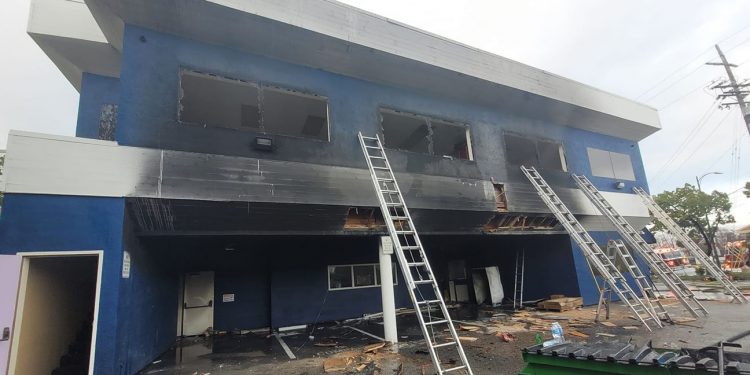 I learned about this when I saw a tweet by the Consul General of Azerbaijan in Los Angeles, Nasimi Aghayev, who stated: “Last December I was saddened to learn that a fire had destroyed Chabad House synagogue in San Jose, CA. @AzConsulateLA contributed funds to the reconstruction of the synagogue. Sharing it to encourage others to support this meaningful effort. I look forward to grand reopening soon.”

Last Dec. I was saddened to learn that a fire had destroyed #Chabad House synagogue in San Jose, CA. @AzConsulateLA contributed funds to the reconstruction of the synagogue. Sharing it to encourage others to support this meaningful effort. I look forward to grand reopening soon. pic.twitter.com/25SUMdVrnv

Azerbaijan is a 96 percent majority-Muslim nation, and our diverse Jewish population includes a thriving Chabad community, in our capital city of Baku, with additional Chabad centers in Quba and in Sumqayit. In Baku, alongside the Chabad synagogue we have a state-of-the-art academic complex – Ohr Avner Day School – for approximately 450 Jewish students, that combines teachings of Jewish culture, tradition and Hebrew language with modern-day science and technology learning. The school also provides Kosher food to the Jewish community. There is also a Jewish kindergarten and numerous Jewish organizations.

Since regaining independence from the Soviets in 1991, the Azerbaijani government has been subsidizing and generously supporting the various synagogues and infrastructure across the country for its 30,000-strong Jewish community. The same is true for churches of various denominations, and mosques throughout the country. A little known secret that should inspire hope in the world: Azerbaijan provides free natural gas to warm all of the churches, monasteries, mosques and synagogues in the neighboring country of Georgia!

The stunning Ohr Avner campus in Baku was built with the support of Azerbaijan’s Heydar Aliyev Foundation, led by First Lady Mehriban Aliyeva, and inaugurated in 2010 by President Ilham Aliyev.

The relationship between Azerbaijan and Jewish communities is truly unique to the world. Jews have been living in Azerbaijan for the last 2,000 years. In 1742, the Muslim Khan of the Quba region of Azerbaijan designated a secure and naturally fortressed area to be the protected home of Jews, and fiercely guarded and sustained the lives of Jews while the region was frequently attacked and overrun by foreign invaders. Today, that same town – called Red Town – is the largest all-Jewish town/shtetl outside of Israel and New York, a truly rare gem. During WWII, thousands of Jews found safe haven in Azerbaijan escaping the Holocaust in Europe. They were welcomed and hosted by Azerbaijani Muslim families as their own. And while Azerbaijan widely opened its doors to any Jewish refugee, 700,000 Azerbaijanis bravely fought against Hitler and Nazi regime on the frontlines; 400,000 of them died.

The centuries-long Azerbaijani-Jewish harmony and brotherhood also allowed Azerbaijan and Israel to build a strong and strategic partnership since the very first day when Azerbaijan regained its independence. This year marks the 30th anniversary of Azerbaijan-Israel diplomatic relations.

Referring to the support from the Azerbaijani Consulate General to the Chabad Synagogue in San Jose, Chief Chabad Rabbi of Baku, Rabbi Shneor Segal, who also leads the European Jewish Synagogue, shared for this article: “I have lived for many years in Azerbaijan, and have experienced the remarkable sensitivity and generosity of both the people and the government, toward religious communities across the spectrum. I am deeply moved to see this generosity extended in California, carried out with the same warmth and kindness that has emanated from Azerbaijan toward the Jewish people, today and for the past 2,000 years.”

And Rabbi Mendel Weinfeld of the fire-damaged synagogue said: “It’s difficult to describe the sense of encouragement and hope we felt when we received the donation. The generosity is undeniable, but what touches me the most is where it came from, and the story behind it all. In a world where division seems overwhelming, it’s so important to highlight examples of light, hope and true solidarity.”

Incidentally, the Chabad community of Baku is currently engaged in the construction of a new Mikveh (a Jewish ritual bath), thanks to the support from the Government of Azerbaijan, which is also helping with funding of the Ohr Avner School.

There is always space for profoundly improving the world we live in, a space of intimate solidarity, of compassion, and a consistent movement of direct action, sharing in the good times and the difficult.

With these considerable inspirations in heart and mind, I look forward to hearing only good news about the upcoming repair of the Chabad Almaden Valley Synagogue and the many celebrations and holidays that will take place there, and of the new Mikveh in Baku that will soon be finalized and ready to use. And I reflect and feel abundantly thankful for friendships; those that are new and soon to be realized, and those that are very, very old. May all of us, in Baku or San Jose, Los Angeles and across the globe, continue to flourish in our friendship and in our shared vision of repairing the world.