Azerbaijan is a pain in Germany’s neck

Also striking is the cynicism of German government officials, who shamelessly told us that they had learned about the problem of fresh water pollution in Karabakh after the protests of the Armenian green activists in Germany. 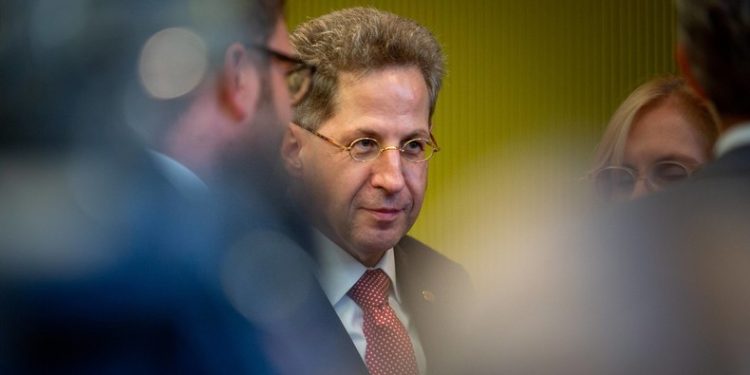 Hans-Georg Maaßen, the man for whom Azerbaijan is a pain in the neck.

The notorious Hans Georg Maaßen, a state secretary in the German Interior Ministry, a CDU Bundestag candidate, called for background checks of the journalists at the popular public broadcaster ARD, questioning their attitude and political reliability. What prompted the former President of the Federal Service for the Protection of the Constitution of Germany, a special counterintelligence service, to urge law enforcement to tighten the screws in a democratic society—and with the important September elections just around the corner, too?

The infamous civil servant was rattled by the “excessive propaganda of President Ilham Aliyev’s regime” on the air of the Norddeutscher Rundfunk (NDR) TV channel, where the ARD Tagesschau news program comes out. A few kind words addressed to Azerbaijan immediately aroused sincere indignation of polizei Maaßen, who suddenly discovered a “clear left-wing extremist spin” in some of the Tagesschau journalists.

This is not the first scandalous anti-liberal statement by Maaßen, who became known not only in the high-profile case of ethnic Turk Murat Kurnaz, a Guantanamo Bay prisoner. Maaßen, positively more Catholic than Biden himself, called Snowden a traitor, which caused a storm of criticism in the German establishment, the Bundestag and the liberal community. One of the main conductors of American interests and Washington’s influence in Berlin, he tried, wriggling and squirming, in a last-ditch effort, to mitigate the consequences of the American intelligence services’ colossal failure in Germany in 2013. It was then that Edward Snowden revealed secret papers of American intelligence, bringing to light the electronic espionage of the United States and Great Britain in Germany.

Maaßen pulled all the stops of his influential post in the German hierarchy to brush the scandal under the carpet and cover up the traces of the crimes committed by foreign intelligence services in his country.

An iconic figure in the elite of the German intelligence services, it is not by chance that he honored several programs and stories about the growing role of Azerbaijan in the regional security system in the South Caucasus with his invaluable attention. Maaßen never gets involved in anything for nothing. An unexpected call must have come from Washington, followed by a timely prompt from Berlin. After all, engrossed with the election campaign, Maaßen would hardly have paid attention to any story by accident, let alone would have threatened liberal journalists by branding them with unsavory labels of “left-wing extremism.” Besides, the activity of “left-wing extremists” began to decline during the growing pandemic. Law enforcement had a historic chance to suppress any attempts at unrest on the part of “extremists”, whose ranks are appreciably expanding on account of declassed groups of struggling Germans, outside the Central European Bank building.

The heavyweight of the German intelligence services just happened to suddenly remember Azerbaijan in the midst of hard-hitting—for the German elite and the country’s public opinion institutions—public stonewalling of CRONIMET Holding GmbH, the German company that tainted itself not only with collaboration with the semi-criminal regime of Karabakh field commanders, but also with the deliberate pollution of the Okhchuchay River, causing an ecological disaster in the lowland Karabakh liberated by the Azerbaijani army.

Aze.media devoted an investigative article to the criminal activities of the German company and its head Gunther Pilarsky, the official partner of ex-ambassador Mikail Minasyan, Serzh Sargsyan’s son-in-law, at the Zangezur Copper and Molybdenum Combine. Many Azerbaijani media outlets gave a lot of attention to this problem, and haqqin.az even sent a journalistic inquiry to the German government, the German embassy in Baku and even to the influential Green Party. The official response from the German Embassy, which was not long in coming, pursued only one objective: to offset the role of German entrepreneurs in the committed ecocide. At least the fact of the purposeful destruction of the ecosystem in a part of lowland Karabakh itself was not disputed by German diplomats.

The indifference of the Green Party, which proclaims the conservation of nature as its key priority, to the growing problem speaks louder than words about the depth of the moral and political decay of the German political elite. “We don’t have time for Azerbaijan,” the spokesman for the parliamentary faction says casually. What influential German entrepreneurs did have time—and investment—for is the destruction of the ecosystem in Azerbaijan during the rule of the illegitimate administration of the occupants.

Also striking is the cynicism of German government officials, who shamelessly told us that they had learned about the problem of fresh water pollution in Karabakh after the protests of the Armenian green activists in Germany. Suppose they did learn about the problem a few years ago. From Armenians. While the territory was under occupation. And yet they somehow managed to miss all of the current public uproar in Baku. But why wasn’t there an appropriate reaction? Why weren’t the investors recalled and held accountable by the Federal Service for the Protection of the Constitution?

Of course, it would be more reasonable for the German government and the German elite to acknowledge and condemn the crime committed in Zangilan. And yet not only does Berlin continue to publicly ignore the catastrophic consequences of the environmental crimes committed by the German company, it also tries to take the heat off Günter Pilarsky and other representatives of German capital. And one of the powerful representatives of the German elite, as if in response to the Azerbaijan’s accusations, directs all his manufactured rage at German TV journalists for their genial comments about Azerbaijan.

By and large, as we have repeatedly stressed, the German political elite retains its hostile attitude towards the Azerbaijani government and uses every opportunity to display it. Berlin and the national German media have traditionally been in the forefront of the permanent campaign arranged by Soros, Washington and the collective West to indiscriminately discredit the Azerbaijani government. Hundreds of articles on the domestic political situation in a country called Azerbaijan, hardly a major player in world politics, magically appeared in the leading German media.

It doesn’t work that way. All the more so in the country of Bismarck and the Third Reich, the country that to this day holds a grudge against Brandt for the “humiliating”, according to proud Germans, liberal act: the social liberal took the liberty to fall to his knees and apologize to the Jews on behalf of the entire German people. Liberal International—defying logic, common sense and, finally, the natural predilections of the German reader. Is Azerbaijan that high a priority in the social and political life of Germany and Europe that the front-page headlines of German newspapers raise the human rights issues in a one remote country? It is improbable that the media of a leading European state should steadily bully and defame one country of ten million for several months. Artificially grown by Brandt, unnatural German liberalism does not display such sensitivity even towards Myanmar.

Imagine all Azerbaijani media deciding to rummage in the domestic political problems of Malaysia, Guatemala, and maybe even Peru for several months. The circulation figures of those Azerbaijani media would collapse in a matter of weeks, and bewildered readers would be wondering what prompted the journalists to impose on them the problems of the Kuala Lumpur penitentiary service, the Kuching detention center and the arrests of activists in Kota Bharu? Hard as it may be to believe, it is true—hundreds of publications about Azerbaijan, meaningless from the perspective of everyday life of a German cornered by the pandemic, cause the same grumbling, annoyance and whining. And in this absurd way, the Ferris wheel of German public opinion continues to rotate on its axis. The pages of the German national media, like in the old strange times, are filled with barely understandable messages from the faraway land of Azerbaijan. And this is a bad omen of Berlin’s new information-political war against Baku. It happened once in 2011-2012, then it happened again in 2014-2015. The style and the informal tone of communication of the Chancellor’s office with the distant Baku administration is the same.

Except Baku cannot figure out the true motives and true intentions of the authors of the new Berlin stratagems. Is Berlin responding to the loud CRONIMET Holding GmbH exposure with a boring text from a broken 2015 record? Is Berlin using Maaßen’s baritone to shout down the accusations voiced in international organizations? Or is it all the doing of Soros’s cloven hoof? Or could it be, as is often the case in Germany, that Berlin simply resorts to an ordinary political strategy, shifting the focus of public’s attention from the corruption scandal with the procurement of face masks, in which Merkel’s successor Armin Laschet’s son managed to implicate himself, to the violation of inalienable and sacrosanct human rights in faraway China, Iran, Russia and Azerbaijan?..

This is not even the worst thing that historical inhibitions coupled with the national Übermensch idee fixe can do to a country.