Azerbaijan is Ukraine’s only strategic ally in the South Caucasus

Traditionally, of the three nations in the South Caucasus, it was usually Georgia that was perceived as Ukraine’s closest ally. 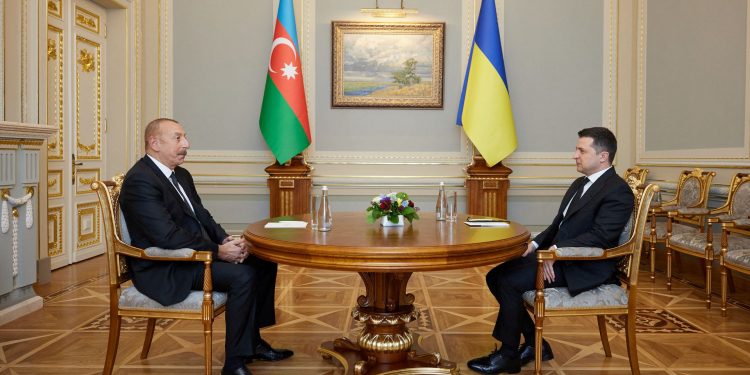 Ukraine supported Georgia in the 2008 Russian-Georgian war, supplied anti-aircraft equipment and President Viktor Yushchenko, Polish and Baltic leaders visited Tbilisi during the conflict. But it is Azerbaijan – not Georgia – which has become Ukraine’s closest ally since Russia launched its unprovoked invasion on 24 February, writes Taras Kuzio.

Armenia is traditionally pro-Russian and has joined all Russian-led Eurasian organizations. Russia is expanding its military bases in Armenia. Since 2014, Armenia has supported Russia’s annexation of Crimea believing – wrongly – it provides justification for Karabakh’s “self-determination”. International law does not give regions of countries the right to self-determination; this right is only given to countries.

Georgia is ruled by pro-Russian oligarch Bidzina Ivanshili who made his billions in Russia’s Wild West during the 1990s. There must be kompromat on him sitting in FSB files. After all, like everybody during the 1990s, Ivanshili had to have broken the law to become a billionaire and to have done this with Russian partners.

Relations between Georgia and Ukraine were difficult before Russia’s invasion. The imprisonment of Mikhail Saakashvili was viewed in Ukraine and the West as political repression and selective use of justice by the Ivanshili regime. Saakashvili’s arrest and imprisonment in late 2021 soured relations with Ukrainian President Volodymyr Zelenskyy who had restored his Ukrainian citizenship and made him a senior adviser. Former President Petro Poroshenko had removed his Ukrainian citizenship and expelled Saakashvili from Ukraine.

No South Caucasian country has imposed sanctions against Russia. This was never expected of Armenia because it is a close Russian ally. But it was expected of Georgia and therefore Ukrainians are stunned why this is not the case. Georgia’s pro-Russian authorities are making excuses for their appeasement of Russia against the backdrop of widespread public sentiment for Ukraine. After all, Russia de facto annexed Georgia’s provinces of South Ossetia and Abkhazia in 2008 and is seeking to annex south-eastern Ukraine.

An unwillingness to support to Ukraine is a product of oligarch Ivanshili’s ties to Russia who is de facto ruling the country. The Georgian opposition are closer to the pro-Ukrainian public mood in the country. The 1,000-strong Georgian National Legion, whose volunteers are sympathetic to the Georgian opposition, is the largest foreign force in the International Legion fighting for Ukraine.

Murad Muradov, the deputy director of the Topchubashov Centre think tank in Baku, Azerbaijan, said: “Azerbaijani public opinion has long been aware of the threat of Russian imperialism. Russian geopolitical interests in the region played a significant military role in Armenia’s victory in the First Karabakh war in the early 1990s. More recently, Russia insisted on installing a significant military presence in the part of Karabakh.”

Muradov added: “Azerbaijani’s remember the support provided by a number of Ukrainian organisations, including frontline volunteering, during the First Karabakh war when global opinion mainly sided with Armenia. The Azerbaijani diaspora has also more positive experiences of living in Ukraine compared to Russia, where they feel more integrated, respected and less subjected to racism. Hence, it is not surprising the dominant mood in Azerbaijan is that of compassion and support for Ukraine’s fight against Russia.”

Azerbaijan’s ability to balance between maintaining relatively good relations with Russia while supporting Ukraine is akin to the foreign policy strategy pursued by Turkey and Kazakhstan. Turkey sells Ukraine Bayraktar drones and continues to militarily cooperate with Ukraine. This month Haluk Bayraktar, executive director of the Turkish company Baykar Makina which produces these drones, told CNN: “We won’t sell TB2 unmanned vehicles to Russia because we support Ukraine, its sovereignty, resistance, and independence.” Turkey’s sympathy has always been with Ukraine and the Crimean Tatars, many of who have lived in Turkey since the nineteenth century.

Azerbaijan balances its foreign policy in an attempt at seeking to prevent military aggression against it similar to that launched by Russia against Georgia and Ukraine. Kazakhstan is weary of Russian nationalist who claim its northern region was wrongly included by Soviet leader Vladimir Lenin within their country. The same spurious argument is used by Russian leaders to lay claim against south-east Ukraine.

Azerbaijan, Turkey, and Kazakhstan back international law, sovereignty and the territorial integrity of states, have rejected recognising Russia’s annexation of Crimea or the “independence” of the DNR and LNR, Russia’s two proxy entities in the Donbas region of eastern Ukraine. Like Azerbaijan, Turkey and Kazakhstan have not imposed sanctions on Russia for its invasion. Within the former Soviet space, only Belarus and Russia recognize the DNR and LNR.

The first is that the EU is desperately seeking ways for its leading members to end their reliance on Russian gas. One of a number of ways this can be undertaken is by increasing Azerbaijani gas deliveries to Europe from its 2021 level of 8.2 billion cubic metres. The US and North Africa are also increasing their exports of gas to the EU.

The second is that Russia’s international isolation has given Azerbaijan greater leverage to seek a peace treaty with Armenia with the assistance of the EU acting as an honest broker. Russia has traditionally supported Armenia in the conflict over Karabakh and prefers to keep frozen conflicts in Eurasia simmering rather than having them resolved. Resolved conflicts are bad business for Russian peacekeepers who would have to return home. Disillusioned with the inaction of the OSCE Minsk Group, Azerbaijan has turned to the EU which is likely to be more successful. Azerbaijan’s frustrations with the OSCE Minsk Group mirror Ukraine’s frustrations with the two Minsk agreements.

The third is that the US is becoming tougher with Armenia as a sanctions buster for Russia and supplier of arms and mercenaries to fight the Kremlin’s illegal invasion of Ukraine. Washington is also critical of Armenia’s close ties to Iran, a long-term existential threat to the US and Israel. In contrast, Azerbaijan’s strategic importance, alongside Turkey’s, is being increasingly recognised by Washington and the EU as an independent pro-Western actor, supplier of energy to Europe to wean it of its reliance on Russian gas and a strategic partner of Israel.

Azerbaijan, the only country in the world that borders both Russia and Iran, proactively seeks to broaden its relations with the West as a balancing factor.

Anthony B. Kim of the Heritage Foundation, a conservative think tank in Washington DC, highlighted the strategic importance of Azerbaijan as an alternative energy supplier to Russia, stating: “Indeed, it’s in the clear, pragmatic interest of the United States and Europe to prioritize and advance relations with Baku as the critical trade, energy, and economic link between the east and west of the Eurasian landmass.” Kim added: “The United States has long supported Azerbaijanʼs efforts to develop and export its energy resources to Western markets, with US companies having been involved in offshore oil development projects there.”

Azerbaijan’s assistance to Ukraine amounts to fifteen million Euros; in contrast, Georgia’s provides a far smaller €315,000 of aid. The State Oil Company of the Azerbaijani Republic (SOCAR) is providing 100 tonnes of free fuel at its 57 Ukrainian petrol stations for use by ambulances, humanitarian vehicles, the sowing of crops, and the Ukrainian military. Azerbaijan has provided 170 tonnes of medical aid and foodstuffs for Ukrainian refugees who have fled to Moldova.

Armenia Russia’s main ally in the South Caucasus alongside Georgian pro-Russian leader Ivanshili who is appeasing Russia by not providing diplomatic or military support to Ukraine. Azerbaijan’s strategic partnership with Turkey is clearly in Ukraine’s geopolitical interests, as is Kazakhstan moving away from Russia and aligning with them. In contrast to Armenia and Georgia, Azerbaijan is providing strong diplomatic support to Kyiv and condemnation of Russia’s infringements of Ukraine’s territorial integrity, and is sending a large volume of humanitarian assistance.

Russia’s invasion of Ukraine and genocide of the Ukrainian nation has shown who are Ukraine’s true strategic allies which include Azerbaijan alongside Turkey, Poland, the three Baltic states, Romania, Scandinavia, the US and UK. Brussels and Washington should recognise Azerbaijan’s support for Ukraine during the on-going Russian invasion of Ukraine.

Taras Kuzio is a professor of political science at the National University of Kyiv Mohyla Academy and Associate Research Fellow at the Henry Jackson Society think tank in London.