Azerbaijan, Israel, and Turkey to open to a trilateral summit 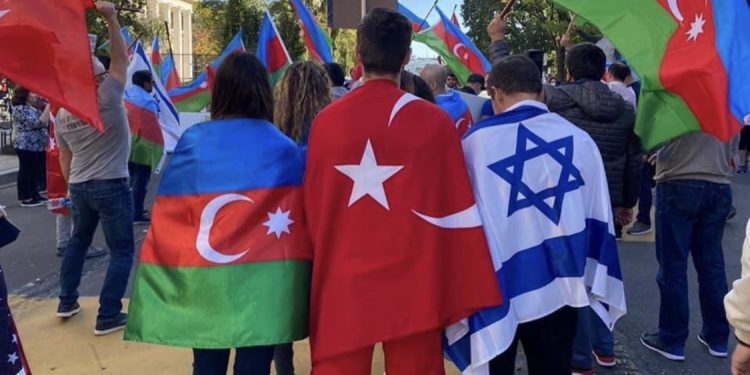 Baku has signaled it is ready to host a trilateral summit between itself, Turkey, and Israel. The news was broken by Hikmet Hajiyev, an Azerbaijani presidential aide, who spoke with Israel Hayom regarding this interest.

“Turkey is a sister country of Azerbaijan and Israel is our strategic partner. We want our friends to be friends with each other. If the sides agree to such an initiative, then Azerbaijan will always welcome them,” said Hajiyev.

The pro-Turkish-government leaning outlet Daily Sabah commented on the deterioration of Turkey-Israel relations as of 2010.

“Relations between Turkey and Israel drastically deteriorated in 2010 following an Israeli naval raid on a Turkish aid ship, the Mavi Marmara, en route to deliver humanitarian aid to the blockaded Gaza Strip. The raid killed 10 activists,” wrote Daily Sabah. To date, Israel and Turkey continued to be divided over policies regarding the West Bank conflict within Israel.

As words of this potential trilateral summit spread, experts and regional analysts were called on to discuss it. Brenda Shaffer, a political scientist, commented recently on the likelihood that the three nations were to come together for geopolitical discourse, in a recent appearance on the John Batchelor show.

Shaffer was a guest on the show to discuss the demining process in the region.

Israel and Azerbaijan share major common interests in the energy sector. On April 26, Shaffer shared this news regarding the developments in the Israeli natural gas sector in the East Mediterranean as the Abraham Accords have paved the way to greater regional cooperation.

“Large international companies are entering and expressing their confidence in our gas economy, and now, following the signing of the ‘Abraham Agreements’, a company from an Arab country is also investing in Israel’s gas market. I believe this is the beginning of cooperation between the countries in the field of energy and in other economic and political fields for the welfare of the citizens,” wrote Dr. Yuval Steinitz, Minister of Energy in the Government of Israel, translated into English.

To date, landmines are the greatest hindrance to the hopeful progress in the Karabakh smart city discussion. The facts of Azerbaijan’s alliance with both Israel and Turkey see the two nations working in proximity in the rebuilding of Karabakh. The major hindrance to the clearing of landmines, reported Defense One, was the reluctance of the Armenian government to hand over maps of the landmines planted in the region.

A greater interest in the inter-regional activity, coupled with Azerbaijan’s presence in the energy sector, emphasizes clearing all the major roadblocks that stand in the way of opening the doors to natural trade. On the Middle Eastern end, the Abraham Accords serve to relax the geopolitical tensions hindering Gulf State trade and communication. Now, an interest in opening up the economic corridor of the Karabakh puts the spotlight on the need for cooperation in removing landmines, absolving human rights issues, and developing sustainable infrastructure.

In the spirit of that relaxation, talks have turned in the Israeli press, toward the channels through which the communication lines between Israel and Turkey can open once again. The Jerusalem Post reported in January that at least six channels of civil society cooperation can intensify. The Jerusalem Post reported that Turkish President Erdogan had voiced Turkey’s desire to have better ties with Israel, despite the divisions caused by the flotilla incident and emphasized by disagreements over the regional conflict between the Israeli State and the Palestinian Authority of the West Bank.

Israel and Turkey had enjoyed continuous diplomatic relations since 1949, which had been interrupted by political issues of the last decade, The Jerusalem Post reported.

“Cooperation between Israeli and Turkish civil society organizations can increase their capacity to tackle these issues, serve as a platform to exchange best practices, lead to innovative joint endeavors, broaden ties between like-minded professionals in both countries, and improve mutual public perceptions. This may also have a positive spill-over effect on official relations. As cooperation among societies increases, Israel-Turkey relations will become less dependent on the politicians,” wrote The Jerusalem Post Opinion.

Joining the conversation are talks of women’s rights and greater education. The presence of Azerbaijan as an empowered mediator in geopolitical relations may also serve to educate and influence ties between its allies. In this Republic Underground roundtable, Ayan Aliyeva discussed how women’s rights and education that focused on an entrepreneurial education can impact Azerbaijan. As the Karabakh reconstruction process unfolds, Azerbaijan’s greater social education comes with the conversation between its allies.

While the signs of Israel tolerance are starting to bear more fruit, the normalizing of relations has been a gradual process. Daily Sabah likewise reported within the last four weeks that it would come as no surprise to the public if Israel and Turkey were to normalize ties soon, and with the mutual ally in Azerbaijan, the budding process may be seen to assist the preexisting process.

The question remains how the regions of the Middle East, Eurasia, and the Caucasus are coming together in new ways, how they might engage Armenia in a meaningful way, to address the easement of political tensions within the country as well as to deescalate some high-risk issues such as the Metsamor plant. What are your thoughts?

The #Chernobyl disaster took place 35 years ago. Dangers still remain from Soviet era reactors. The #Armenia #nuclear power plant #Metsamor is one of the last operating without a containment vessel. Metsamor is located in a major seismic zone @eu_eeas https://t.co/wIgV89Pruv

The complex issues of the Palestinian Authority conflict with the state of Israel are driven by many factors, see The Washington Institute. They are, in part, driven by religious factional dispute and extremism. This is another area where the presence of Azerbaijan as a mediator and friend might serve as a helpful civil society voice, and benefit Israel domestically. Azerbaijan natively enjoys religious pluralism between Shia and Sunni Muslims, Jews, and Christians and has since antiquity. What can the history of religious tolerance, coexistence, and today’s civil society programs in Azerbaijan lend to the de-escalation of the religious components of conflict between the Israeli Muslims and the Israeli Orthodox Jews? We’d love to hear your thoughts after you hear what these religious tolerance experts from Azerbaijan have to say about their fully integrated Abrahamic religious communities.

Israel, despite its ancient roots, has experienced growing pains of a nation adopted and redeveloped post World War II. Many of these growing pains are challenged by religious-based propaganda.

“Religion-based rumors propagated by extremists in the media and social media about the hidden religious agendas of the other side exacerbate these tensions. Examples include rumors about a “Jewish Plan” to destroy al Aqsa mosque and build the Jewish third temple on its remnants, and, on the other side rumors that Muslims hold the annihilation of Jews at the core of their belief,” wrote the Washington Institute.

Azerbaijan has also been faced with religious-based propaganda that was the result of its Karabakh conflict. Yet, with a history and culture stretching back into the days of Zarathustrian religion, Azerbaijan’s civil society organizations can lend a unique voice and education to those who would seek to pacify the inter-religious conflict between Muslims and Jews.