The timing of the arrest has again raised suspicions about a senior officer around whom rumors had long swirled. 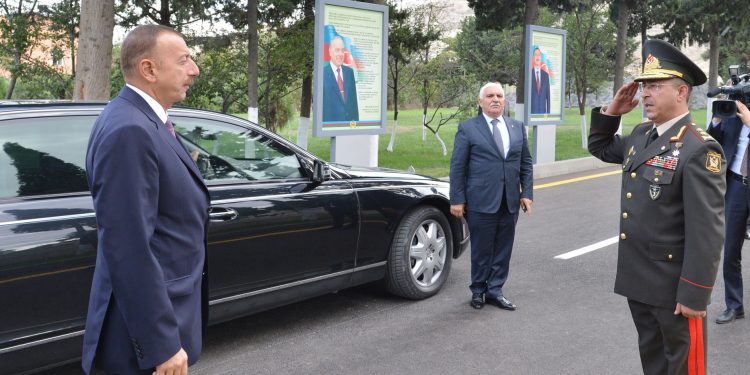 A senior Azerbaijani general who was the subject of widespread rumors of treason has been arrested on 20-year-old murder charges.

The arrest represents the second case of a prominent military leader facing punishment following the country’s victory over Armenia in last year’s 44-day war. Najmaddin Sadikov, the chief of staff of the army, is no longer serving in the military and has disappeared under mysterious circumstances.

Now, Lieutenant General Rovshan Akbarov, whose most recent post was commander of the Baku Corps, has been arrested on charges related to a murder from 2001 in Kyiv. Akbarov is accused of stabbing to death an Azerbaijani businessman, Elchin Aliyev, during an argument outside a cafe.

On a decision by the Baku Military Court, Akbarov was arrested on March 15 and ordered to be detained for four months. Two days later, the general prosecutor’s office announced that it was reopening criminal proceedings in the case.

“After the criminal case was re-examined by the Prosecutor General’s Office in 2020, The Office revoked the decision to suspend the criminal proceedings, and the Investigation Department of the Prosecutor General’s Office conducted numerous investigative actions and collected enough evidence to investigate the case,” the prosecutor’s office said in a statement. “Grounds for suspicion” were established to charge Akbarov, it said.

Like Sadikov, with whom he was associated, Akbarov was frequently accused of treason by Azerbaijani social media users during last year’s war.

Akbarov began his career in the Soviet armed forces and served in Afghanistan. He was named a “National Hero” in 1994 for his performance in Azerbaijan’s first war with Armenia, and was first appointed commander of the Baku corps in 1998.

He had denied involvement in the murder, saying he only learned about Aliyev’s death from employees of the Azerbaijani embassy in Kyiv when Azerbaijani authorities questioned him in 2002. The same year, the Azerbaijan prosecutor office said it had decided to return the case to Ukraine, that there was insufficient evidence and contradictions between the testimonies that eyewitnesses gave. At about this same time, in Azerbaijan, Akbarov was promoted to lieutenant general.

In 2010, the Serious Crimes unit of the Prosecutor General’s office said it was suspending the criminal proceedings into Aliyev’s death, explaining that “it was not possible to determine the person (persons) who committed the crime despite the fact that at the time being all possible operational investigative measures were taken.” (sic)

In 2014, following an appeal by Aliyev’s parents to the European Court of Human Rights, the court ruled that the crime had not been investigated properly.

Since Aliyev died, his family has sent dozens of letters to various government agencies, including the Presidential Administration and the Prosecutor General’s Office, demanding that Akbarov be punished. His mother, Samaya Aliyeva, said in a 2016 interview with Meydan TV that she had approached President Ilham Aliyev about the issue, and that she had documentation from Ukraine that supported her contention.

“I was begging the president …. to not put the killer of my child face to face with me. I cannot live. He (the president) turned to me and said, “Mother, I will help you.” Then I turned to his wife and asked her a question. I said, ‘I have spent a lot of time with your assistant. I appealed but I did not receive any answer. I swear to you wherever you go, take this letter. This letter came to us from Kyiv and has been properly investigated,” Aliyeva said.

Last year’s war brought renewed attention on Akbarov. In December, he was asked by local news outlet Qafqazinfo about reports that he had been removed from the army and that his name never appeared in any news about the war. “At present, I have no connection with the army. I’m busy with something else. Therefore, I will not say anything,” he replied.

In February, Azerbaijan’s Ministry of Defense confirmed that Akbarov, along with another general, had been relieved of their duties, without offering further explanation.

Aliyeva said she is finding a little comfort now that Akbarov has been arrested.

“I did not lose hope,” she told Meydan after the prosecutor’s announcement. “I’m not like 20 years ago, I’m much older. But still, we did not stop. Thankfully, they helped. True, it will not return my baby, but it is a bit of comfort.”

Many commentators have suggested that the arrest and charges for the 2001 Kyiv murder were merely a pretext to go after Akbarov.

“The European Court ruled in 2014” on the case, one Azerbaijani lawyer, Agil Layic, wrote on Facebook. “If he was going to be arrested it should have happened then. It is absurd to see this as the motive for his arrest.”

“Twenty years after the murder, the prosecutor’s office woke up to the fact that there were reasonable suspicions that Rovshan Akbarov had committed this crime,” activist Bakhtiyar Hajiyev wrote on Facebook. “One of the real reasons for his arrest was treason during the war,” he argued.

Even pro-government media suggested that there was more to the arrest than was being announced officially.

“Why didn’t the Azerbaijan military political leadership use Akbarov in the war?” asked the news website azar.az following his arrest. “There is only one logical answer to this question: How much of a traitor do you have to be that as soon as the war begins, a veteran of Afghanistan and the First Karabakh War – that is, with professional experience, including in Karabakh – is immediately removed from the military process?”

It added: “Of course, all this does not mean that Akbarov did not commit a crime in 2001. It is a matter of ‘remembering’ the crime.”

There could be several explanations for the removal of Akbarov, along with Sadikov, said Jasur Mammadov, the head of the think tank Caspian Defense Studies. One is related to concerns that they could have passed information on to Russia, which then could have found its way to Armenia, Mammadov said. Another is from a genuine fear that they could sabotage operations during the war. “These men led tens of thousands of servicemen, and they could at any time make a subversive order to withdraw their troops,” he said.

The two generals’ ouster also coincides with a broader push to reform the Azerbaijani military to be more in line with a Turkish model, which means that Soviet-legacy officers are not wanted. “Now they can be an obstacle, in this context, they need to be removed in some way,” Mammadov said.