Azerbaijan is observing “Black January” Thursday (today) against the invasion of its capital Baku, Sugmait and other cities under orders from the defunct USSR leadership. 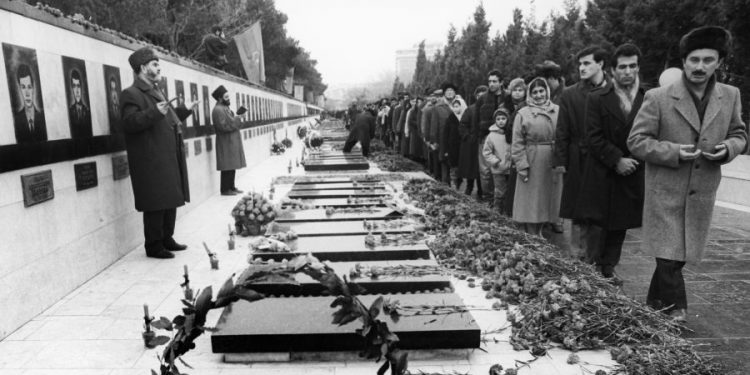 According to the Azerbaijan Embassy on the night of Jan 19 to 20, 1990, by the order of the USSR leadership, 26,000 Soviet troops invaded Baku, Sumgait, as well as other cities of Azerbaijan. As a result of this military intervention, 147 civilians were killed and 744 were seriously injured. This event went down in the history of modern Azerbaijan as “Black January”.

Before these tragic events, the groundless territorial claims of Armenia against Azerbaijan in the late 1980s, the aggressive separatist activities of Armenian radicals in the Nagorno-Karabakh Autonomous Region of the former Azerbaijan SSR and the Soviet leadership’s support to this illegal activity, as well as the violent and brutal deportation of hundreds of thousands of Azerbaijanis from Armenia spurred the expansion of the movement against the Soviet government in Azerbaijan. The Soviet Army deployed to the country to prevent the national movement and break the will of the Azerbaijani people for independence, committed massacre against the peaceful population, violating the norms of international law, the Constitutions of the former USSR and the Azerbaijani SSR. The former Soviet leadership is directly responsible for this crime.

According to international law, the events of Jan 20 must be described as a crime against humanity, and its initiators and perpetrators must be brought to justice. Azerbaijani Army ensured the territorial integrity of the country as a result of the 44-day war and Azerbaijan, in its 31st year of restoration of independence, is currently a reliable and responsible member of the world community.

Strengthening the independence, sovereignty and territorial integrity of Azerbaijan is the foundation of its statehood, and its struggle for the constant uphold of these basic principles is persistent.

“We commemorate with deep respect and gratitude the memory of all our heroes who gave their lives for the independence of Azerbaijan, as well as for the sovereignty and territorial integrity of our country,” the embassy statement added.