Azerbaijan says no Israelis on border, warns against Iran ‘provocations’

Azerbaijani officials rejected claims by Iranian officials that Israeli forces are present on the Azerbaijani-Iranian border. 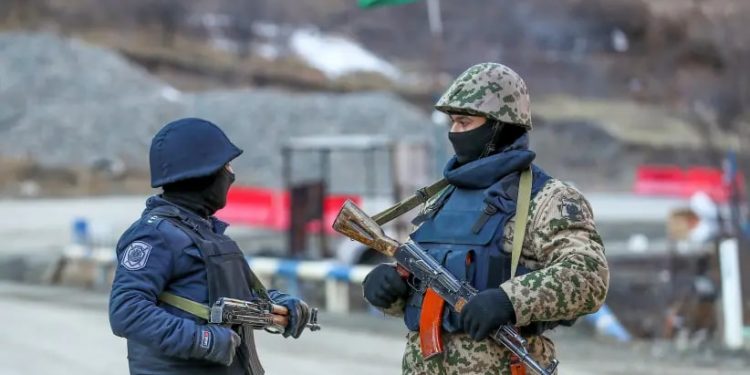 Azerbaijan’s State Border Service (SBS) rejected claims by Iranian officials that Israeli forces are present in Azerbaijan near the Iranian border, saying that Azerbaijan “does not need the support of foreign forces.”

The Azeri SBS stated in response that there never have been, are not and never will be forces of any third country on Azerbaijan’s border, according to the Azeri APA news source. The SBS added that it does not need the support of foreign forces.

The SBS additionally stressed that Azerbaijan has the sovereign right to apply border and customs control on roads that cross through Azeri territory.

The statement added that, despite weekly meetings taking place at various levels between Azerbaijani and Iranian border guards, no information concerning the allegations of foreign forces in Azerbaijan was ever given to the SBS, according to APA.

The SBS warned that “any provocations directed at the state interests of the Republic of Azerbaijani in the state border will be resolutely prevented also from now” and recommended that Iranian officials “be more responsible, and avoid to spread false and defamatory information.”

Iranian Foreign Minister Hossein Amir-Abdollahian also made claims of an Israeli presence along the Azerbaijani-Iranian border on Monday, warning against Israeli provocative actions from Azerbaijani territory, according to Iranian media.

“We have several concerns about the South Caucasus region, the first concern is that some foreign interventions are leading the region to change the geopolitics of the region, change borders, close or relocate border crossings while terrorists are present in the region,” said the foreign minister.

Amir-Abdollahian claimed that “terrorists” have entered the region since the start of the Nagorno-Karabakh war last year, saying that these concerns had been raised in diplomatic meetings between Iran and Azerbaijan.

“Azerbaijani officials promised us weeks ago to take the necessary measures to clear the region of terrorists,” said the foreign minister. “The Zionist regime has started provocative actions in our region through the territory of Azerbaijan. We consider some of the harsh statements made by the Azerbaijani authorities these days to be unconstructive.”

The head of the press service of Azerbaijan’s Foreign Ministry, Leyla Abdullayeva, responded to Amir-Abdollahian’s comments on Monday, stating that there have been no alleged terrorists in Azerbaijan since the start of the Nagorno-Karabakh war, according to APA.

“As President Ilham Aliyev noted, Azerbaijan, which has an Army of more than 100,000, does not need mercenaries,” said Abdullayeva, questioning why such claims were not put forward by Iran during the war nor after the war until the new Iranian government took office.

“The Anti-Azerbaijan campaign will not bring benefit to Iran,” warned the press service head. “It is clear that the reasons for the groundless claims are prevention of illegal entrance of Iranian trucks into Azerbaijani territory and liberation of Azerbaijani territories from occupation.”

Abdullayeva advised Iran to look at its own surroundings if it wants to look for terrorists. “We remind that even in October of last year, Azerbaijan’s MFA presented information, based on concrete facts, on the participation of Armenian mercenaries in battles in the country territories, which were under occupation at that time, to diplomatic corps in the country, as well as Embassy of the Islamic Republic of Iran,” claimed the press service head, according to APA.

Iranian trucks were taxed, and at least two drivers were detained, as they traveled on a road between the Armenian towns of Kapan and Goris, which partially crosses through territory handed over to Azerbaijan after the Nagorno-Karabakh war last year, according to RFE/RL. The highway, patrolled by Russian peacekeepers, is Armenia’s only link to Iran.

Tensions also rose recently due to joint military exercises carried out by Azerbaijan and Turkey in the Caspian Sea, with the Iranian Foreign Ministry warning that such drills violated international conventions banning the military presence of countries other than the five states that border the sea.

Iran launched the “Conquerors of Khaybar” exercise earlier this month in northwestern Iran, near the border with Azerbaijan. Kioumars Heydari, commander of the Iranian Army’s Ground Forces, said that the exercise was being conducted in order to test weapons and equipment, and assess the readiness of the armed forces in any arena and along the borders of Iran, according to the Fars News Agency.

The name of the exercise, “Conquerors of Khaybar,” seems like a reference to the Battle of Khaybar in 628 CE, when Muslims, led by Muhammad, fought against the Jews there, eventually defeating and imposing a tax on them.

Former Iranian diplomat Amir Mousavi claimed that there were 1,000 Israeli operatives and 1,800 ISIS ones in Azerbaijan. Mousavi said in an interview with the Hezbollah-affiliated Al-Mayadeen news earlier this month that Iran had deployed its military on its border with Azerbaijan in order to warn the country “not to play with fire.”

Mousavi additionally claimed that Israelis with advanced equipment in Azerbaijan played a role in the assassination of Iranian nuclear scientist Mohsen Fakhrizadeh.

Israeli arms, including the LORA missile and the Israel Aerospace Industries Harop suicide drone, were reportedly used by Azerbaijan in the Nagorno-Karabakh war with Armenia last year.