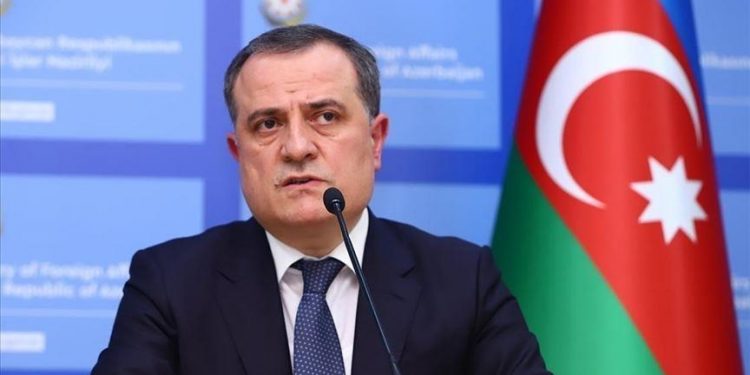 The Azerbaijani foreign minister on Tuesday said his country remained committed to supporting the reconstruction and economic development of Afghanistan.

“We remain committed to supporting the stabilization, peaceful reconstruction, and development of Afghanistan through bilateral efforts as well as active participation within the multilateral platforms,” said Jeyhun Bayramov at the 9th Ministerial Meeting of Heart of Asia-Istanbul Process, co-chaired by Tajikistan and Afghanistan, in the Tajik capital Dushanbe.

“We closely follow the intra-Afghan peace talks with the hope that this process will eventually lead to the establishment of durable peace and security in the country in full respect to Afghanistan’s sovereignty, independence, and territorial integrity,” Bayramov added.

“Azerbaijan regards the Istanbul Process as a valuable mechanism of attaining peace, reconciliation, security and economic development of Afghanistan.

“Azerbaijan is among the first and most active supporters of Afghanistan in its endeavors to overcome the ongoing challenges. Since joining the Process in 2012, we have been actively participating in this multilateral platform,” he added.

The regional initiative of Afghanistan and Turkey, launched in 2011, has two chairs: permanent chair Afghanistan, and a different co-chair from among the member states each year.

It aims to promote regional security and economic and political cooperation centered on Afghanistan through dialogue and confidence-building measures.

“Azerbaijan remains committed to furthering the Istanbul Process, including as a co-lead country of the two confidence-building measures, namely the Regional Infrastructures and Counter-Narcotics CBMs, together with Turkmenistan and the Russian Federation, respectively,” Bayramov said.

Highlighting the ongoing regional projects such as the Baku-Tbilisi-Kars railroad, the new Baku International Sea Trade Port, logistics center on the shores of the Caspian Sea, Bayramov said those initiatives will “facilitate Afghanistan’s access to the global market and provide connectivity in the region, capable of handling cargo and containers in a much shorter, faster, efficient and cost-effective way.”

“The Lapis-Lazuli Route Agreement by Afghanistan, Azerbaijan, Georgia, Turkey, and Turkmenistan is a major international trade and transport corridor deal that will connect Afghanistan directly to Europe,” he went on to say.

“It is a milestone in Afghanistan’s efforts to achieve connectivity through improvement and building of infrastructure for increased trade across Eurasia,” he said, adding: “Being part of this Agreement, Azerbaijan is glad to contribute to providing multiple options for Afghanistan in terms of transit and transportation.”