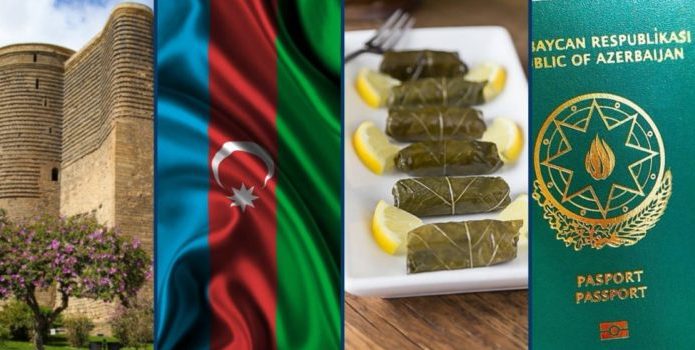 These are more or less the six conditions Anthony Smith cites as defining a nation:

The most important of these conditions is language unity. A nation may not have a specific physical geography, but if it does not have a common language, that nation will die, like the Hittites, the Etruscans, or the Latins. The second most important condition is shared historical moments, or political past. Thus, the political past can separate nations that speak the same language, for example, the British and the Americans. At the same time, representatives of different nations can lay claim to the same land they call the homeland, for example, like Armenians and Azerbaijanis claim the same lands. The sense of patriotism that caused these claims to take on a mass scale and be put forward is the result of a systematic information and education process, nationalism being the peak of this process. This process is entirely aimed at shaping the national identity of an individual. The most important examples of nationalism expressed as a mixture of national identity and patriotism are Ataturk’s Turkey, Pakistan’s and India’s ethnic and other divisions, the division of empires into nation states, or Azerbaijan’s secession from the USSR and its war against Armenia over Nagorno-Karabakh. The ultimate goal of building a national identity is to build a nation state or to preserve an existing nation state, and, for this purpose, to form a unity by bringing to the fore the language, history and other cultural factors that make a nation.

According to Ataturk, one of the most important factors that make a nation state a state is historical unity. He believed in the studying and teaching of the national history as the prerequisite for the creation of national identity. In general, as part of the nation-building policy, education is to some extent mixed with politics with the aim of serving the interests of the state. This is the case in most countries of the world. For example, we can point out the significant amount of state budget allocated to confirm the reality of the “Masada myth”, which came to the fore on the eve of the establishment of the Jewish nation state in 1948. Excavations have been conducted in the area to confirm this myth based on the writings of the ancient historian Josephus “proving” that Jews lived in the lands where they founded their present-day state as far back as 2,000 years ago and fought heroically against the Romans in the 1st century CE. However, no archeological findings were able to fully support this myth. As a result, such myths, which connect the past and present of the geographical region, served to form the idea that “if the people lived in this land, then the roots of the people belong there.” In Azerbaijan, too, the government and educational institutions raising specialists for it are trying to guide history programs. Among the goals of teaching history, inculcating a sense of national identity and cultivating a “good” citizen is particularly important. Periodical press also plays an important role in shaping the national idea.

As for the formation of political identity and national idea in Azerbaijan, I would like to note first that the word “Azerbaijani” should be considered as an indicator of geographical, not ethnic affiliation. Thus, a nation named “Azerbaijanis” did not exist in ancient history, it is a concept of modern history. History textbooks published by the state attribute Azerbaijan’s past to Manna, Atropatena (“Adərbayqan” during the Sassanid occupation, “Azərbaycan” after the Arab occupation, covering part of southern Azerbaijan that is part of present-day Iran) and Caucasian Albania (that existed in a part of the modern Republic of Azerbaijan). Although these states were formed in some of the lands of present-day Republic of Azerbaijan, they are not considered the foundation of the modern Azerbaijani state. These states were not completely independent and did not have the traditions of national statehood. For a long time, the states established on the lands of Azerbaijan were vassal to various empires. It would also be as absurd to call the ancient Caucasian Albanians Azerbaijanis as to call the ancient Hittites Turks. The only Caucasian Albanians living in Azerbaijan today are the modern descendants of the Udi, one of the 26 Albanian tribes, and there are very few of them.

Modern Azerbaijanis belong to the Turkic peoples. Although the influx of Turks into the region had taken place earlier, the transformation of Azerbaijan into a Turkic land occurred mainly in the 10th century with the arrival of the Oghuz Turks. The Aghgoyunlu and Garagoyunlu states that existed here in the 14th-16th centuries were of Turkic origin. It was in this period that the first works of art in the Azerbaijani language (Azerbaijani dialect of Oghuz Turkic) were created. In 1501-1736, the Safavid state, which, along with the territory of Azerbaijan, included neighboring Iran and other lands, was governed by a Turkic dynasty. The khanates established in the region in the late 18th and early 19th centuries did not form a foundation for Azerbaijani statehood, as the khans simply wanted to maintain internal independence over the regions they ruled. Therefore, it would not be right to talk about national feelings, national unity, and national idea in the period of feudal disconnection.

During this period, the foundations of Tsarist Russia were faltering, opposition voices and ideas of national statehood were rising across the empire. It was then that Azerbaijani intelligentsia was formed under the cultural influence of the West and began to demand language, cultural and other social rights for Azerbaijan, and later, autonomy and independence. However, there was no like-mindedness among Azerbaijanis. While a group of intellectuals saw Azerbaijan as an autonomous state within the Russian Empire, another group saw it as part of a Muslim union, and yet another group saw it as part of a union of Turkic states, imagining the Azerbaijani identity in this way. That is why the Azerbaijan Democratic Republic, which existed in 1918-1920 under the slogan “Turkification, Islamization and Europeanization”, was wrapped in Turkish, Muslim and democratic state identity. The law on the mother tongue, adopted on June 27, 1918, established “Turkic” as the official language. This continued even in the first years of Soviet rule in Azerbaijan, and only in 1937 was the language renamed “Azerbaijani”. This can be considered as part of the Soviet government’s policy of sovietizing Azerbaijan and alienating it from Turkey and Turkic identity. Thus, instead of an Azerbaijani Turkic identity, a simply Azerbaijani ethnic identity began to emerge. By “Azerbaijani” we mean people of Turkic descent who speak Azerbaijani and mostly practice Islam.

A new Azerbaijani identity is being created today. The ethnic factor is being mixed with the citizenship factor. On the model of Article 66 of the Turkish Constitution, “Everyone bound to the Turkish state through the bond of citizenship is a Turk,” all citizens living in Azerbaijan are “Azerbaijaniized.” This process is accompanied by significant violations of the political rights of ethnic minorities, especially language rights. By modern Azerbaijanis we mean: ethnic Azerbaijanis, Udis, Lezgis, Budukhs, Jews, Tsakhurs, Ingiloys, Kurds, Tats, Talysh and other ethnic minorities living in the territory of the Republic of Azerbaijan, making up more than 90% of the population, and spreading to different parts of the world. We can also mention here the Armenians living in Nagorno-Karabakh.

Multicultural values are now brought to the fore in the multi-ethnic Azerbaijan. Russian-language schools, special Jewish schools, languages of some ethnic minorities being taught in primary school, and their organizations being established are cited as proof. However, these are appearances. For example, the Udis, who have lived in these lands since the time of Caucasian Albania BCE, forgot their language, lost their national identity and became Azerbaijanis. The same can be said of the Tsakhurs. The situation with the Talysh is different. They were able to preserve their language to some extent, they have cultural centers, TV programs, newspapers, etc. However, the key staff of these media outlets were subjected to persecution and various punishments on charges of “treason,” and newspapers and magazines were regularly shut down. It seems that the 1993 fears about the Talysh are still alive in Azerbaijan. It is hard to believe that the Talysh, or Jews or Armenians, will continue to mark their ethnicity as Azerbaijanis in 100 years. Therefore, the development of Azerbaijan’s national identity should not be based on the violation of the rights of ethnic minorities living in the country. This could make them more aggressive and lead to a new division of the country. Then again, it hardly occurred to the British in the 12th century that some of their citizens would go to the American continent and gain the American national identity.

In an appropriate environment and with the right policy pursued by the state, history books hundreds of years into the future may remember the Azerbaijani nation and the years-, even centuries-long existence of the Azerbaijani state, every citizen of which spoke the Azerbaijani language and could be united as a single force against foreign threats. The formation of such environment, in other words, the creation of the sense of Azerbaijani national identity, is possible by ensuring the democratic and universal human rights of every Azerbaijani citizen, regardless of ethnicity or region of residence. Regionalism, which is particularly widespread in Azerbaijan today, is easily the most damaging factor in the formation of a single Azerbaijani national identity. Finally, when the destiny of the nation, of the homeland becomes the destiny of every person, that nation lives and exists. Therefore, if we want to keep the Azerbaijani nation alive, we must put aside ethnic discrimination, personal discrimination and regionalism and work together for the homeland. The only way to do this is unity.