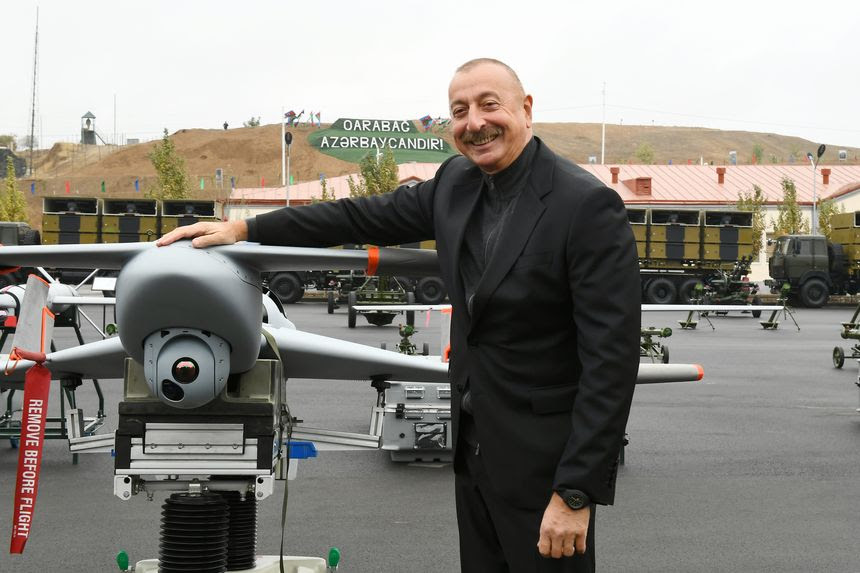 Technically classified as a “loitering munition,” the Harop behaves, in the latter stages of its mission, like a cruise missile, crashing into its targets and exploding on impact. In the early stages, however, it functions as a drone, circling high above the battlefield, waiting for targets to emerge. The Harop is well known in Azerbaijan, thanks to the role it played in the victory last year against Armenia.

But it was for Iran’s benefit that Mr. Aliyev organized this photo-op. In recent weeks, Tehran has engaged in a crude campaign of intimidation that included military exercises on Azerbaijan’s frontier—a surprise move that elicited an angry response from Mr. Aliyev. “Why now, and why on our border?” he asked publicly. “There were no such incidents in the 30 years of Azerbaijan’s independence.”

Iranian officials answered by demanding that Azerbaijan end its alliance with Israel. “We do not tolerate the presence and activity against our national security of the Zionist regime, or Israel, next to our borders,” said Hossein Amirabdollahian, the Iranian foreign minister. “And we will carry out any necessary action in this regard.”

Iran has good reason to be worried. Its economy is in shambles, and unemployment is rampant. By contrast, Azerbaijan’s economy is strong, and its army is even stronger, thanks in part to the assistance from Israel, which organized a military airlift to resupply Azerbaijan during the 2020 war with Armenia.

Seen from Tehran, Israeli influence in Baku appears especially ominous because of the extraordinary reach into Iranian society that Azerbaijan enjoys. Ethnic Azerbaijanis, a Shiite Turkic people, form a large portion of Iran’s population, somewhere between 20% and 30%. They are concentrated in the northwest part of the country, on the border with Azerbaijan. Though a major secessionist movement hasn’t developed, discontent is rife, and strong feelings of solidarity with Azerbaijan are often on display.

The Iranian government has long assumed that Israel owes the successes of its covert war against Iran’s nuclear program to clandestine Azerbaijani networks. In 2012, after two men on a motorcycle attached a magnetic bomb to the car of Mostafa Ahmadi Roshan, an Iranian nuclear scientist, Iran’s foreign ministry summoned the Azerbaijani ambassador and protested the assistance Azerbaijan was thought to have provided to Israeli intelligence.

Whether Israel is truly receiving direct assistance for its covert operations is anyone’s guess. Whatever the case may be, the Israelis clearly recognize that the rise of Azerbaijan is knocking the Islamic Republic off balance. When members of the Azerbaijani minority in Iran learned that Iran was helping Russia to resupply the Armenian army during the war, they sabotaged transport vehicles and launched public protests. Moreover, the subsequent victory of the Azerbaijani army has all but shut Tehran out of the postwar diplomacy in the South Caucasus. On none of Iran’s other borders does Tehran feel so exposed and powerless to shape events.

To say that Azerbaijan, with a population of only 10 million, has deterred Iran without American help is an understatement. At times the U.S. has actively obstructed. In 2012, when the Obama administration was courting Iran, senior American officials briefed the press on military cooperation between Azerbaijan and Israel with the clear intention of scuttling it.

Now Washington is again courting Tehran. Although it is doing nothing to impede cooperation between Baku and Jerusalem, its supine posture in the face of Iranian aggression has created an environment that invites acts of intimidation such as those to which Azerbaijan is being subjected.

The Biden administration would be better served by following Israel’s example. The benefits to the U.S. of a rising Azerbaijan extend well beyond the effort to counter Iran. Azerbaijan is the only country to border both Iran and Russia. A strong and self-confident Baku is also a counterbalance to Moscow.

The chaotic pullout from Afghanistan demonstrates that, if the U.S. is to remain the leading power in global politics, it must find a way to deter nasty international actors while simultaneously respecting an electorate that is wary of military interventions. The best way to balance these imperatives is to forge productive understandings with countries that wield capable militaries—and who aren’t afraid to use them.

When Mr. Aliyev hugged the Harop he was intentionally sending a message of defiance to Iran. Unintentionally, he was also sending a piece of sage advice to Washington: New challenges require new friends.

Michael Doran is a senior fellow at the Hudson Institute.