Many who fled Nagorno-Karabakh in the ’90s hope to live in their old homes after last year’s war, but progress is slow. 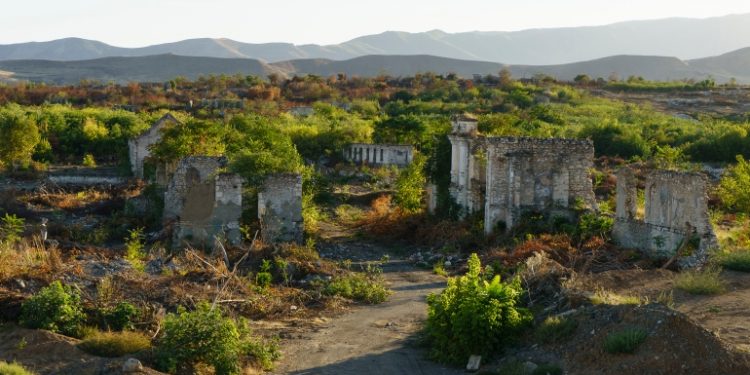 It has been three decades since Rasmiya Ahmadova last saw her home village in Kalbajar, a leafy district in western Azerbaijan scattered with fruit and walnut trees.

Her adult children have never visited, and with a lifetime spent in temporary accommodation, the family never stopped dreaming they would one day return.

That wish is now tantalisingly close.

Last year, Azerbaijan reclaimed parts of Nagorno-Karabakh and seven surrounding territories – including Kalbajar – as a longstanding conflict over the mountainous enclave flared up.

More than 6,000 mostly soldiers died across the two sides in the war – and half the ethnic Armenian population, or about 75,000, were displaced.

For the more than 600,000 Azerbaijanis who have been displaced since the first Karabakh war in the 1990s, however, when Armenia ceded swaths of territory recognised as Azerbaijan to its control, the victory was righteous.

It was also bittersweet – over the last 30 years, Ahmadova has lost six family members to the fighting, including her eldest son.

“He was a very considerate person. He was not just a son, but my friend,” she said, flicking proudly through a hardback book with printed pictures of 27-year-old Nijat Atayev in military uniform and looking dapper in a slim-fit charcoal suit.

In Azerbaijani tradition, neighbours gather to remember Nijat a year after he was killed, when his tank hit a landmine on the first day of last year’s war.

Each has their own story of loss: the brother who fell while trying to protect fellow soldiers; the friend who was washed away in the 1990s by a torrential Aras River as they tried to cross to Iran to escape Armenian troops.

Ahmadova’s third-floor apartment in Gencler Seherciyi, in the district of Binagadi on the outskirts of Baku, is surrounded by wasteland and oil refineries.

It is one of several so-called “Little Karabakhs”, ghettos for the long-term displaced – residents were re-homed here in 2012 after years living in dormitories, schools and tented camps.

According to the UN, Nagorno-Karabakh’s Azerbaijanis are one of the world’s largest internally displaced populations per capita, at one point accounting for 7 percent of the country’s population.

Yet outside the oil-rich nation, their plight has gone largely unnoticed.

Armenia and Azerbaijan, both former Soviet republics, fought for six weeks from September last year over Nagorno-Karabakh, which is internationally recognised as Azerbaijan but largely populated by ethnic Armenians.

A peace deal was signed between the two countries in November, but the dispute had been in a state of frozen conflict for decades.

With roots dating back more than a century, frictions first boiled over into war when the enclave’s parliament voted to join Armenia in the 1980s. Between 20,000 and 30,000 people are estimated to have lost their lives in the first war, which ended in 1994 when ethnic Armenians gained control of the region.

As well as more than half a million Azerbaijanis being internally displaced, the first war also saw at least 300,000 Armenians seek refuge after leaving Azerbaijani territory.

Some then lived in the captured regions that surround Nagorno-Karabakh – but fled again last year when they were won back by Azerbaijan.

An entire generation has been brought up in exile.

Azerbaijan has said 70 percent of displaced people want to return to the Nagorno-Karabakh region.

But it could take up to 10 years to fully clear the area of landmines and unexploded weaponry, Deputy Foreign Minister Elnur Mammadov told Al Jazeera.

Large infrastructure projects are under way to connect the newly regained territories to the electricity mainframe and to transport links. The first returnees are set to be relocated to a purpose-built smart village in the district of Zangilan early next year, according to Mammadov, with more reconstruction projects planned for completion soon after.

However, it is likely to be a slow process and the wait has proved too much for some.

According to Azerbaijan National Agency for Mine Action, more than 60 people have been injured and two were killed in landmine accidents after evading military restrictions so they could visit their homeland.

The collective trauma of a community where every life has been shaped by this protracted conflict is tangible at Gencler Seherciyi.

Mountain people who once lived alongside oak forests and grazed their cattle in the verdant steppes now live stacked on top of one another in rows of identikit blocks.

The internal sense of loss hangs heavy and it emerges as staunch nationalism – a belief that complete dedication to the cause is not just important, but a duty. The sentiment is only magnified in the young, who have grown up with tales of a glorious mountain paradise they have never seen.

Despite the pain clear in her eyes, Ahmadova spoke only of pride for the price Nijat paid for the cause.

Her family lived together in one room in the dormitory of a sport university for 10 years before moving to Gencler Seherciyi.

Nijat, who was awarded three medals posthumously for his service and who will be honoured by a local school that plans to name a classroom after him, was obsessed with Nagorno-Karabakh.

He wore the military uniform he begged his parents for on his first day of school and he enjoyed playing with toy guns, saying as a child that he was “ready to fight with Armenians”.

“My last and final memory of him was when he called home the day before the war began. He was in the army and he knew it was going to happen,” said Ahmadova.

“He had joy in his voice and was laughing. When I asked him why, he said ‘There is good news mum, but I can’t tell you yet.’”

She showed a video on her phone of three young men in a car in military fatigues, jovial as they drive to join their unit near Fuzili, where Azerbaijani troops on September 27 last year.

“This is the last autumn of our lives,” Nijat said in the video.

All three died the next day. They did not get as far as Nagorno-Karabakh.

“You can see they are not afraid,” said Ahmadova.

After almost 30 years of absence, the attachment to Nagorno-Karabakh runs so deep for many that two senior residents of Gencler Seherciyi told Al Jazeera they fear they will suffer a heart attack when they finally see it again.

To mark a year on from the war, a few families were granted access to the hilltop town of Shusha (known as Shushi to Armenians), which sits looking over the Armenian-held parts of Nagorno-Karabakh.

The strategic settlement has been named as Azerbaijan’s cultural capital since it was reclaimed in the last and most brutal battle of the 2020 war.

In Shusha’s flag square, a memorial service is held for fallen fathers.

Their children plant 100 pine trees that an official from the Yashat Foundation, which was set up to help the families of soldiers killed and injured last year, says will grow four or five metres tall.

One girl, 17, wears an Azerbaijani flag wrapped around her shoulders. When asked what it meant to see Karabakh for the first time, she shared the same sentiment as others Al Jazeera spoke to: “There are no words.”

“You can’t really describe these emotions. There is both a lot of happiness and a lot of sadness,” said Sahnaz Abbasova, 47, a pupil in the last class to graduate Shusha school before she fled in 1991. She and her former classmates were granted permission to visit the town as part of filming for a state TV documentary.

Despite much of the regained territories lying ruined due to either war or neglect, the promise of return for the long-term displaced goes beyond bricks and mortar: it is a chance to reconnect with forgotten childhood memories and to reclaim an identity – to no longer be displaced people in need, but be proud residents of Karabakh.

For Ahmadova, no matter how many years her family have spent in Baku, it will never feel like home. Once it is announced that Kalbajar has been secured and is safe, she plans to move back the next day.

“My son and many others died for those territories,” she said. “We have sacrificed so much for this land – it is our duty to return.”

One year after the Karabakh War: What is the Kremlin up to?

Free Shusha: The coda of the war – Part II 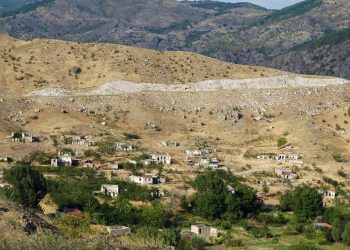 Azerbaijan’s plans for Nagorno-Karabakh are huge, but can Baku deliver on its promises?