Charles Michel, the President of the European Council, announced on November 19 that in the margin of the Eastern Partnership Summit to be held in Brussels on December 15, there would be a meeting between Azerbaijan’s President Ilham Aliyev and Armenia’s Prime Minister Nikol Pashinyan. 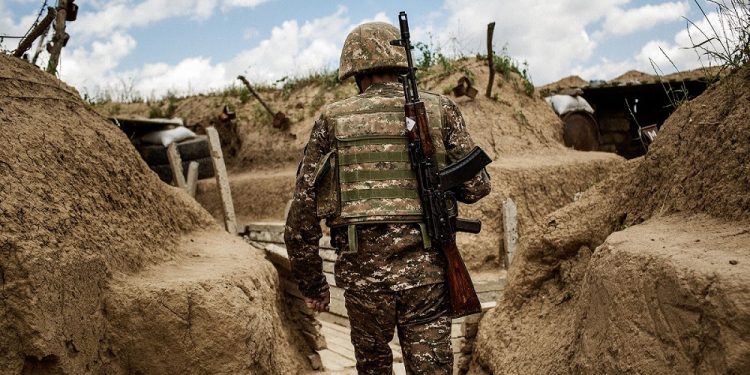 This welcome announcement followed a period of aggravated tensions between the two countries due to military clashes on their common yet undefined border.

Naturally, each side blamed the other for these new clashes. There are elements outside the region, however, that goes a long way toward explaining why they erupted at this particular time and the political dynamics behind them. Let me explain.

There is a tendency, amongst analysts and observers in Europe and America, to regard Armenia as a “unitary” political actor and to reify its behavior in the person of its prime minister. This is an understandable shorthand that even informed journalists and professional political scientists employ for many states. For example, “Putin” is sometimes used as such a shorthand personification or place-holder (technically, a synecdoche, where a part stands for the whole) to signify Russia’s behavior in international energy geopolitics for the European Union.

In the case of Armenia, this is an error. It is not sufficiently recognized or understood that Pashinyan is under continual domestic attack by a coalition that refuses to recognize the country’s loss of the Second Karabakh War. This coalition, which extends beyond the territory of the Armenian state proper, indeed seeks to prepare a Third Karabakh War to retake the Azeri territories that were occupied for 30 years and to ethnically re-cleanse them of Azeris just as was done during the First Karabakh War in the early 1990s.

This pro-war coalition has three principal components. The first is the “Karabakh clan” comprising former presidents Robert Kocharyan (1998–2008) and Serzh Sargsyan (2008–2018) plus all of their followers, political clients and current state functionaries with whom they seeded the entirety of the Armenian state apparatus during the 20 years of their crushing political hegemony.

The second component of this pro-war coalition is Iran’s Islamic Revolutionary Guard Corps (IRGC), which achieved its “soft coup” against the theocratic elite or “mullahocracy” several years ago. Cooperation between the Armenian military-industrial complex and IRGC-related weapons systems producers has increased markedly in the last year, with the assistance of financial support from the Armenian diaspora.

The third component is the Armenian diaspora. It is impossible to gauge precisely its size overall. Estimates employing differing definitions and methodologies range from three to eleven million. A fair estimate is probably between six and seven million. This is over twice the number of Armenians in Armenia itself.

Well over half the diaspora resides in three countries: France, Russia and the United States. The number in Russia (estimated by Putin in 2020 at “over two million”) is about two times the number in France and the U.S., the latter two being roughly equal with one another.

It is well known that the diaspora’s members have long been politically very influential in both France and the U.S. (It is less well known that Russia is no different in this respect.) The official diaspora organizations in the West are typically hyper-militant and maximalist in their program and demands, declaring outright that they do not want peace.

But war is the foreign policy of fascism. It is possible to see unsettling similarities between the bellicose exhortations of certain diaspora organizations and the program of documented collaboration by the Armenian Revolutionary Federation (Dashnaktsutyun, Sargsyan’s political party, under which banner Kocharyan ran for parliament in 2021) with Adolf Hitler and his national-socialist regime during World War II.

It is important today to understand that there is explicit cooperation amongst the Armenian diaspora, Iran’s IRGC and the Karabakh clan in domestic Armenian politics. This cooperation explains the recent military clashes that I mentioned at the beginning of this article, and in the following way.

Pashinyan does not control the whole of the Armenian state apparatus. Since his original election in 2018 and re-election in 2021, he has been succeeding little by little in installing people who are loyal to him to replace the clients of the Karabakh clan. He seems to have taken some control over the ministry of foreign affairs, also appointing new ambassadors; and the state security services appear by and large to be loyal to him.

He still has a long way to go, however. Despite the arrest of two successive defence ministers for corruption and the installation of a new defence minister just a few days ago who is a Pashinyan loyalist, significant portions not only of the defence ministry but indeed of the army’s military formations themselves remain in the pocket of the Karabakh clan.

In the middle of November, the U.S. Congress began final consideration of the National Defense Authorization Act (NDAA). The Armenian lobby in Washington and its allies in both houses of the Congress pushed amendments to the NDAA seeking to deny various forms of aid and assistance from the U.S. government to Azerbaijan, even including non-military assistance. The Karabakh clan and their associates in the Armenian military timed the clashes on the border with Azerbaijan for maximum effect upon this lobbying effort; they were successful.

The result is contrary to European as well as American interests. Armenia remains an ally of Iran and a client of Russia. It cooperates with Iran’s other clients in the Middle East, including such non-state terrorist actors as Hezbollah. Even military observers in Russia acknowledge that Armenia’s peaceful development is necessary for Russian security. That is because a renewed war would only increase political instability in the South Caucasus, while also offering Iran more opportunities to use its ally Armenia so as to penetrate the region further in opposition to Russia’s interests.

It is extremely important that the meeting between Aliyev and Pashinyan in Brussels should not be a mere photo-op. It would be helpful if it were well prepared if the leaders were accompanied by significant entourages capable of speaking frankly and extending the discussions as required.

Perhaps most of all, the President of the European Council should consider inviting the two leaders to meet briefly with him before leaving them alone together in a one-on-one conversation for as long as they should wish to speak. This would be the first time that such a meeting between the two heads will have occurred. It is something that not even the OSCE’s Minsk Group have been able to arrange.

This diplomatic opportunity must not be wasted. The discussions between the two sides might continue elsewhere than in Brussels. Pashinyan was forced by domestic political pressure to cancel a meeting in Moscow earlier this month that would have been mediated by the Russian side.

That meeting would have sought again to implement the ninth point of the trilateral declaration of November 10, 2020, concerning the opening up of communications and transportation links between the two countries. On the agenda of that meeting was also the initiation of the process of the delimitation of the international border between the two countries, on the basis of Soviet military maps in the possession of the Russian Ministry of Defence.

By provoking the recent armed clashes and at the same time stirring up the Armenian population against Azerbaijan, the “war party” in Yerevan—which as I have explained goes beyond Yerevan to Tehran and the Armenian diaspora in Moscow, Paris and Washington—made it impossible for Pashinyan to keep his commitment to attend that meeting in Moscow and finally kick off those peace-making processes.

The war party wants most of all to make a peace treaty impossible. Such a treaty would involve mutual recognition of territorial integrity and the delimitation of the international border. In that way, signifying the end of Armenia’s territorial claims against Azerbaijan would severely complicate fund-raising by the diaspora’s official organizations for further war (and their own salaries).

The coalition of (1) the official organizations and representatives of the Armenian diaspora, (2) Iran’s IRGC and (3) the Karabakh clan inside Armenia is the greatest threat to peace in the region. If the Eastern Partnership—indeed, if the European Union—wants to make any difference at all, then it must recognize this reality and adopt really effective policies to promote peace in support of Pashinyan, and also Aliyev in equal measure, and against the danger that Armenia becomes a failed state. Otherwise, the EU will be left in Armenia with a hollowed-out state that is hostage to a terrorist group, which is, in turn, beholden to Iran’s IRGC: like Lebanon.