The traditional Global Forum kicked off in Baku yesterday. The event was first held in 2013 as part of the South Caucasus Forum. 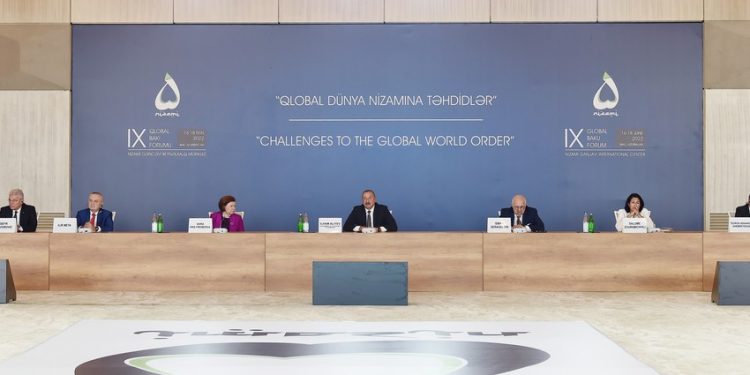 Later it joined of the lineup of traditional international meetings under the name of “Global Baku Forum”, bringing together former and current heads of states and governments, prominent politicians, experts, statesmen, political and public figures from many countries around the world.

The theme of this forum, “Challenges to the Global World Order”, looks particularly relevant in the context of the ongoing war in Ukraine and the emergence of new hotbeds of armed conflict.

The Global Baku Forum gains more and more authority by the year, not only because of the relevance of the topics discussed, but also because of the professional experience and credentials of its participants

The organizers of the forum, the Nizami Ganjavi International Center, chose the most topical issues on today’s international agenda for a reason. The events happening in the world threaten the world order, posing new challenges to global security and stability. The fact that experienced politicians, statesmen and influential experts from dozens of countries have gathered in Baku in such turbulent times to find a way out of the current situation is Azerbaijan’s contribution to global security.

More than 300 guests, including President of Albania Ilir Meta, President of Georgia Salome Zourabichvili, President of Bosnia and Herzegovina Šefik Džaferović, former leaders of many countries, as well as the leaders of the World Health Organization, the League of Arab States and other organizations are attending the forum, which is being held under the auspices of President of Azerbaijan Ilham Aliyev.

Leaders of Great Britain, Italy, Latvia, and other countries have addressed the Forum.

The Global Baku Forum gains more and more authority by the year, not only because of the relevance of the topics discussed, but also because of the professional experience and credentials of its participants. Today GBF has a reputation of an influential and prestigious international platform for finding solutions to the key issues of the global agenda. In terms of significance, the Global Baku Forum is comparable to the Munich Security Conference and the World Economic Forum in Davos. However, the GBF exceeds both Davos and Munich in the scope and relevance of the topics discussed.

As we know, the forum in Davos covers only economic issues and the main challenges facing the global economy. At the traditional Munich conference, politicians, experts and government officials discuss urgent security issues. Meanwhile, the Baku forum is a more inclusive phenomenon, because its participants discuss a wide range of political, economic and humanitarian issues facing humanity today.

Undoubtedly, the Forum is as important in terms of communicating Azerbaijan’s position on the key issues of the agenda to the international audience. If before the 44-day war Azerbaijan used the GBF platform to raise awareness of the international community on the real state of affairs in the so-called “Karabakh issue”, now the Baku Forum is something of a mirror that objectively reflects the political and economic processes taking place in the region of the South Caucasus.

It is no coincidence that President of Azerbaijan Ilham Aliyev focused most of his speech at the opening of the forum on factors hindering peace between Armenia and Azerbaijan.