Armenians have once again hit rock bottom, showing their cowardly, shameful nature. The attack of a group of Armenians on the Cultural Center of the Azerbaijani Embassy in Paris was such a crime. 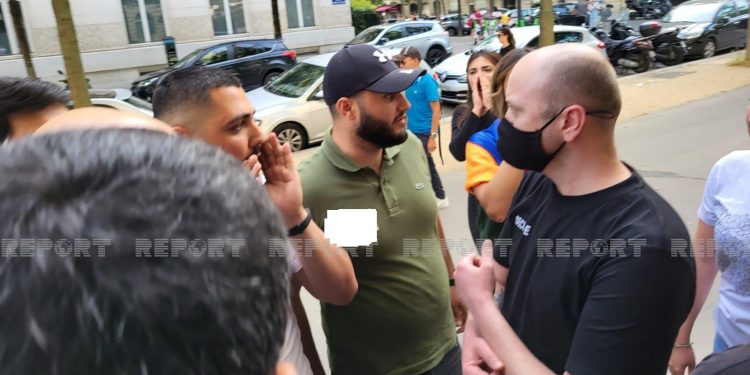 Not daring to confront Azerbaijan in the battlefields of the 44-day war, Armenians are doing what they are only capable of doing – starting a provocation, which worthy and self-sufficient people would never stoop to.

The attack resulted in the injury of Ayten Muradova, Vice-President of the French-Azerbaijani Dialogue Association. We hope that all those who took part in this unprecedented outrage will be detained and punished, and Ayten Muradova will recover and will be back in her post.

For whom and what were the Armenian “patriots” taking revenge, attacking an institution that has some diplomatic status, but is not as guarded as the embassy? Why did the “pride of the nation” suddenly rise up in the Armenian diaspora of France, insulted by Azerbaijan’s victory in the Karabakh war? It flared up and resulted in barbaric aggression.

And it was the film “The Road to Karabakh”, which was supposed to be shown at the Cultural Center of the Embassy of Azerbaijan in Paris, that allegedly provoked the Armenian youth to this action. Determined to disrupt the screening, the Armenian nationalists gathered at the Center and started chanting provocative slogans about Shusha and Karabakh. And then they attacked a defenceless Azerbaijani woman, an employee of the social and cultural institution.

When you look at the photos of the incident, you can’t help but wonder. The attackers were all young men, of athletic build, and there seemed to be no signs of retardation on their faces. So why did they think they were doing something right and were allowed to attack a woman just because she was Azerbaijani, that is, according to their perception, an enemy? And I would like to ask where were you “brave men” in October-November 2020 when you had to defend your mythical “Artsakh”? What were you doing then? Were you sitting in the “trenches” of the Armenian diaspora in Paris? Or were you one of your glorious compatriots, who grabbed toilet bowls and ran away from the liberated areas, shaking in fear of the Azerbaijani military? But now, after more than a year and a half, when you have surely managed to deliver the cherished toilets to the places of a new residence, you have settled down again, improved your welfare, calmed your fears, and then it occurred to you again “to fight for your motherland”? Only, of course, not on the battlefield, where, as it is quite obvious and even you understand, the Azerbaijani soldiers will smash your heads, but somewhere else, to win an easier and loud “fame” – for example, to attack, the Cultural Center of the Embassy of Azerbaijan in Paris, where surely no one expects any aggression, physical violence.

Every time we get convinced that the shameful and low nature of Armenians is hard to overestimate. It constantly gives us the fuel for thought. And so, if young people commit these barbarities, it means that, alas, all caveman reflexes of the “long-suffering nation” are successfully inherited. Reflexes of a clearly criminal nature. Having the opportunity to prove themselves in defence of their mythical “motherland,” Armenian patriots do shamefully different things – they fight in peacetime, arrange cheap provocations, and attack people. Thus, the Armenian youths have committed a true crime – an attack on a diplomatic facility under the jurisdiction of Azerbaijan and protected by French law enforcement officers, they wounded an Azerbaijani. Apparently, they were counting on the fact that they could get away with it, and that the French police would not be so tough on the “friendly” Armenian people. We shouldn’t get our hopes up, however. The French justice will sort it out, while Azerbaijan will do its best to punish the perpetrators.

But the feeling that there has been no special breakthrough in the consciousness of Armenians during this year and a half has become even stronger. Everything works according to the same algorithm. The Armenian diaspora abroad has obviously never learned anything, never learned the lessons of the 44-day war. Instead of striving for peace, Armenia and Armenians in general and in particular are demonstrating a regressive policy, not using the opportunities and chances that Azerbaijan has generously offered after the capitulation of Yerevan. Revanchism is rampant in the country itself, with calls for a new war with Azerbaijan, there are armed provocations on the borders, and no pan-Armenian repentance for what they have done. Armenia is not willing to repent for the victims of Khojaly, a 30-year occupation and the devastation of other people’s lands. The tactics do not change either: cowardly, sneaky pogroms and riots are still in use, just as the Dashnaks did at the beginning of the last century. Armenian “patriots” are only capable of this.

Armenia declares its aspiration for peaceful dialogue and cooperation only as a figure of speech, while in reality, it demonstrates vehement revanchism, a policy of lies and provocations. Well, President Ilham Aliyev has repeatedly spoken about these tactics of Armenians, warning that Azerbaijan’s patience is not unlimited: if Armenia is not willing to use the chance given to it for peaceful dialogue and cooperation, we can speak harshly and in a different language of influence to appease the “bellicose spirit” of Armenians, both in Armenia and abroad.