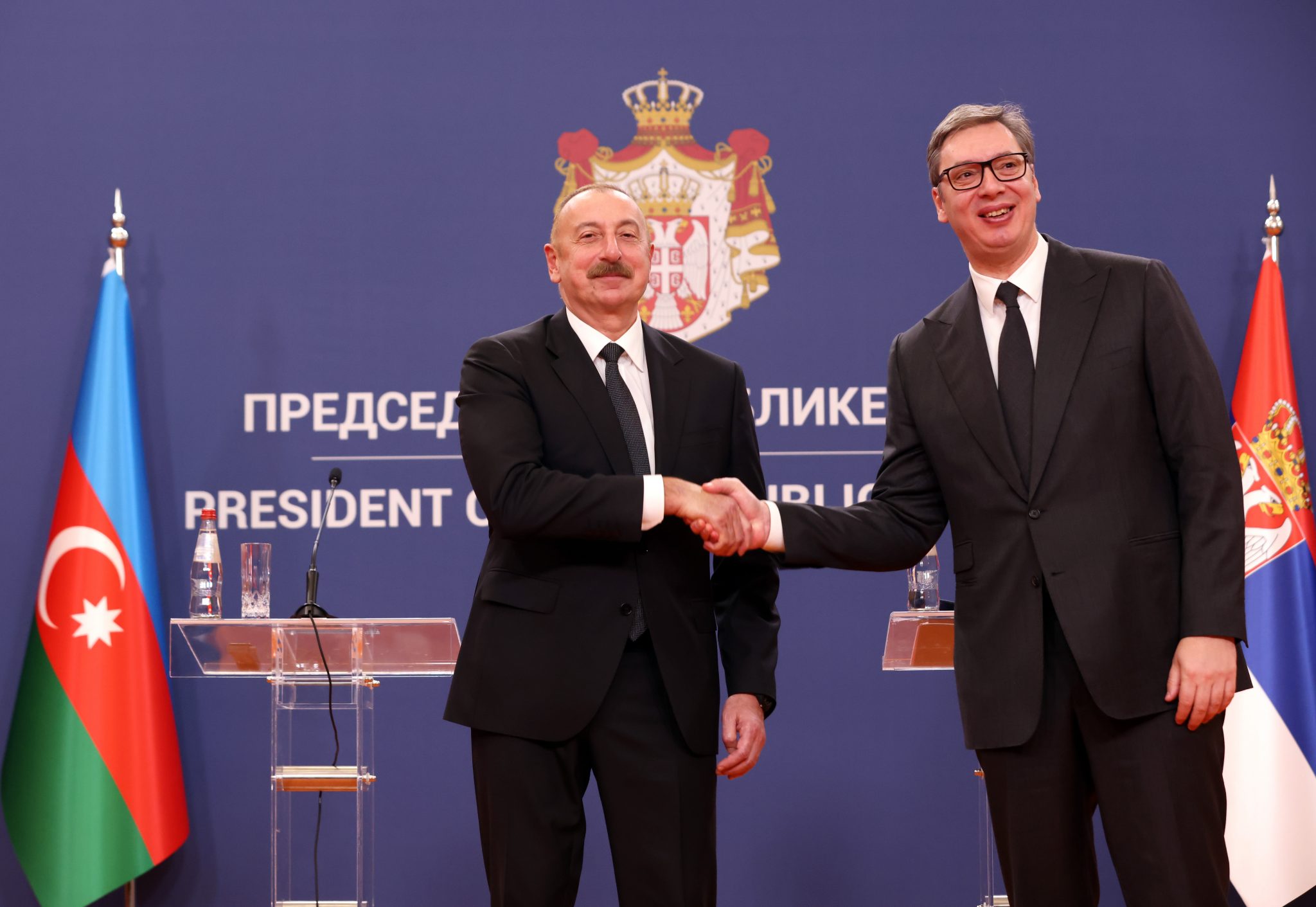 During the first trip, to Albania, it was decided to establish an Azerbaijani diplomatic mission. Strategically significant agreements on energy cooperation were made between Azerbaijan and Serbia on the second visit.

In a complicated geopolitical time, Azerbaijan and the Balkan nations are getting closer to each other.

The Balkans and the Caucasus are linked in many ways. At different points in time, these two ancient regions were a part of the same state. Each region has fascinating natural features that coexist with ethnic, religious, and cultural diversity.

Unfortunately, a bloody past is also one of the factors that these two regions share: thousands of people died in the various ethno-territorial wars that plagued both regions in the 1990s as a result of political disintegration processes.

Today, however, both the Balkan and Caucasian nations strive for a peaceful future. Having gained the denomination of regional leader, Azerbaijan has been able to build long-lasting relationships with its Balkan friends, based on mutual respect.

It was Romania that recognized the independence of war-torn Azerbaijan in the early days of its post-Soviet life. Each day that has passed since has seen the relationship between Azerbaijan and the Balkan countries grow. Romania remains one of Azerbaijan’s closest partners and has consistently supported its integration into the Euro-Atlantic space.

Romania has been one of the biggest proponents in the European Union of the GUAM, a regional bloc created by Azerbaijan, Georgia, Ukraine and Moldova. SOCAR, the state-owned company of Azerbaijan, which operates more than 60 gas stations across Romania, is crucial to Bucharest’s energy security.

Energy cooperation between Azerbaijan and Bulgaria is no less important. This cooperation is of special significance not only for Sofia’s domestic demand but also for wider European energy security, which has been imperiled by the brutal invasion of Ukraine by Russia.

Bulgaria, which has been under immense pressure from Russia for many decades, started strategic energy cooperation with Azerbaijan to reduce its dependence on Moscow.

On October 1, the gas Interconnector Greece-Bulgaria, IGB, which delivers Azerbaijani gas to Bulgaria, began operations. This interconnector, which European Commission President Ursula von der Leyen has called a “game-changer”, will allow Bulgaria to significantly reduce its dependence on Russia in the short term.

In the long run, it will play an important role in supplying gas to neighbouring Romania, Moldova, and Ukraine, which all face unprecedented energy blackmail by the Kremlin.

Albania is another country with whom there are important bilateral energy connections. A country with little to no natural resources, it is now contributing significantly to European energy security thanks to its energy cooperation with Azerbaijan.

It is through Albania that the Trans-Adriatic Gas Pipeline, TAP, the backbone of the energy architecture of Southern Europe and the Western Balkans, transports Caspian hydrocarbons to Italy.

President Aliyev of Azerbaijan and President Aleksandar Vučić of Serbia signed a declaration on their strategic partnership and alliance at the end of November, elevating relations between the two countries to a new high.

Azerbaijani support for Serbia is not limited to the issue of the country’s jeopardized territorial integrity. When Belgrade suffered huge economic hardships, Baku that stepped in; important infrastructure projects and motorway construction were completed in Serbia thanks to Azerbaijani loans.

Azerbaijan and Bosnia and Herzegovina are also connected by more than just shared cultural heritage; both countries also suffered greatly as a result of ethno-territorial conflicts. Minefields, war, and forced displacement are all familiar recollections for Azerbaijanis and Bosnians. These two countries have consistently stood by one another during hard times, for each other’s causes.

The Khojaly-Srebrenica monument in Sarajevo is a vivid illustration of the two nations’ tragic past. Sarajevo also received aid from Azerbaijan during the COVID-19 outbreak and got its citizens jabbed thanks to the vaccines provided by Azerbaijan. The Azerbaijani embassy was opened in Bosnia in 2021 so that diplomatic ties might be further strengthened.

The Azerbaijani side has always favoured pragmatism in relations with Greece, even though there has also been some degree of friction. The energy projects of Azerbaijan have helped make Athens one of the most significant energy hubs. Azerbaijan once prevented Russia from establishing an energy monopoly over Greece by purchasing a share of DESFA, the Greek gas distributor, on the Greek side’s urging many years ago.

During his time in office, however, former Prime Minister Alexis Tsipras led some foreign policy initiatives in a manner that damaged bilateral relations. However, the parties have hopefully moved past this time of tension, as a result of the meeting of the two heads of state in October 2022, when both parties stressed the need for closer cooperation. Greece is interested in increasing energy imports from Azerbaijan, particularly given the challenging geopolitical and geo-energy conditions in Europe.

In its bilateral and multilateral interactions, Baku has always placed a priority on mutual respect, the rule of international law and pragmatism, as can be seen from its relations with several Balkan nations. It also is worth drawing noting the expanding ties between Azerbaijan and Croatia, Slovenia, Montenegro and North Macedonia, in addition to the aforementioned nations.

Russia’s aggressive war in Ukraine has significantly upended Europe’s security architecture and exposed Azerbaijan and the Balkan countries to a number of fresh challenges.

In such a complex geopolitical setting, Azerbaijan can work with its partners in the Balkans to eliminate these dangers. Azerbaijan, which shares strong cultural ties with the Balkan countries, has no geopolitical schemes against the Balkan nations, unlike some other external powers. Nor does it aim to use its relations with the Balkan nations against others. Azerbaijan’s approach to the Balkans entails forging partnerships along a political path that advances shared objectives. The last 30 years have amply demonstrated that Azerbaijan has supported its Balkan friends during their most trying moments.

Azerbaijan and the Balkan countries still have a great deal of potential to improve relations. Two projects in particular should be highlighted in this regard. First, the Ionian-Adriatic Pipeline, IAP, will be capable of transporting Azerbaijani gas from Albania to Croatia via Montenegro and Bosnia and Herzegovina before delivering it to Central Europe, if the necessary financial investment and political support are made.

The delivery of electricity from Azerbaijan to Romania, over the Black Sea and eventually to Central Europe, is a project of equal strategic importance.

The establishment of such a “green corridor” has already been agreed upon by Azerbaijan, Georgia, Romania, and Hungary. The European Union has the same strategic objectives in this area as Azerbaijan, which wants to establish itself as a hub for green energy in the region. If realized, this green corridor will be an important part of the so-called Middle Corridor, which has recently become more relevant and whose purpose is to divert the passage of transport and communication lines through Russia to alternative routes.

The construction of a gas interconnector between Romania and Serbia will also help reduce dependence on Russia by getting Azerbaijani gas to Belgrade. Increasing the transmission capacity of existing power lines is also in the strategic interests of both Azerbaijan and the European Union.

In the current complicated geopolitical environment, the Balkan states may overcome their challenges by strengthening their strategic partnership with Azerbaijan and so laying a solid foundation for the co-development of the Balkan and Caucasus regions.

For this, it is crucial to maintain and grow pragmatic relationships founded on international law and respect for one another. By supporting this process both politically and financially, the European Union, which cooperates with the Western Balkan states within the framework of its Neighbourhood Policy, may reach its regional strategic aims more quickly.