The 44-Day war of the Karabakh region, an enclosed mountain space within the legal territory of Azerbaijan, ended with unresolved political tensions. A ceasefire was mitigated by Russia in November, after failed attempts by western powers to reach a ceasefire. 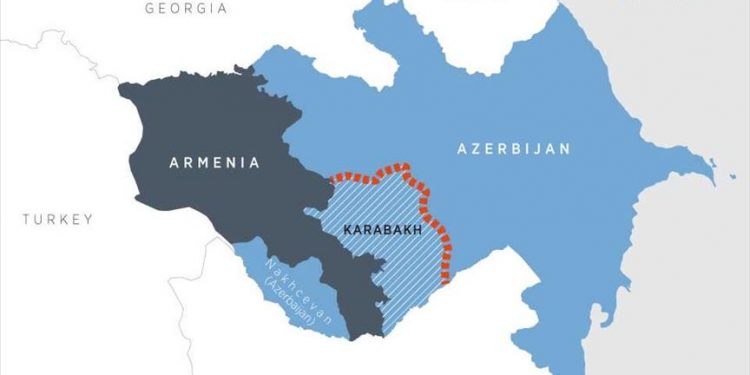 As tensions rise once more, Azerbaijan states that one of its troops was wounded in a recent shelling, which Yerevan denies took place. This was reported by Radio Free Europe on May 28.

“During the night of May 27-28, our positions near the settlement of Ashagi Buzgov in the Babek region of the Nakhchivan Autonomous Republic came under fire from the Armenian armed forces in several directions. As a result, a serviceman Muradov Elkhan Ilham oglu was wounded in the shoulder. Our wounded soldier was immediately given first aid and evacuated to the hospital. There is no danger to the life of our serviceman,” wrote the Azerbaijan Ministry of Defense.

In a seperate incident, Armenian nationals were arrested at the shared border in the Kalbajar region. Azerbaijan detained at least six Armenian nationals, both sides confirmed. Armenia claims that the six Armenian nationals were attempting to do engineering work near Azerbaijani military positions.The six arrested Armenians later attested to the fact that they were laying mines in the area in which they were captured, thought they claimed that it was on their side of the border, see this report by the MOD of Azerbaijan. Azerbaijan states that it took six prisoners after surrounding an Armenian “sabotage” near the village of Yukhari Ayrim which is in Kalbajar. This was stated by the Azerbaijani Defense Ministry, and appeared in a media post by BBC.

Further incidents included a statement by the Ministry of Foreign Affairs of Armenia which described the shooting of an Armenian servicemember a “full seven meters” within Armenian territory. As disputes and clashes over the border area continue, Armenia continues to accuse Azerbaijan of “forays” into its legal sovereign regions. The continued clashes and debate over incidents at the hairsplit of the border between the two nations adds tensions to the diplomatic processes, and the demarcation efforts, prompting warnings from the international community to respect national integrity.

The Karabakh conflict of 2020 ended with many unresolved political issues. While Azerbaijan repatriated many of its de jure territories from Armenian armed forces occupation during the 44-Day War, repatriation has been met with serious challenges. These include the relocation of ethnic Armenians to legal Armenian lands, a process that has led to heated tensions and increased animosities between both sides. Armenia’s discontent with its leaders has led to an outcry of protests in the border region, which triggered alarm along the border, see Associated Press for more on the initial protests.

Azerbaijan also faced the issue of landmines left behind in the liberated territories. The Armenian government’s refusal to trade maps of the landmine locations with Azerbaijan has led to demining issues, and increased political tensions as attempts at normalization and demarcation were delayed.

Eurasianet noted the heightened tensions which “were as high as they’ve been” since the end of the conflict in November 2020. Yet, as tensions escalate, the journal pondered Russia’s apparent silence. As the primary mediator of the current ceasefire agreement, Russia’s voice and presence is expected. Despite this, commentators with Eurasianet speculated as to why Moscow appears to be diplomatically disengaged, despite having sent 2,000 troops to the region to maintain the peace.