Clearing mines that have been planted by Armenia on occupied Azerbaijani territories will take nearly 30 years and cost $25 billion, Azerbaijan’s President Ilham Aliyev said on Thursday. 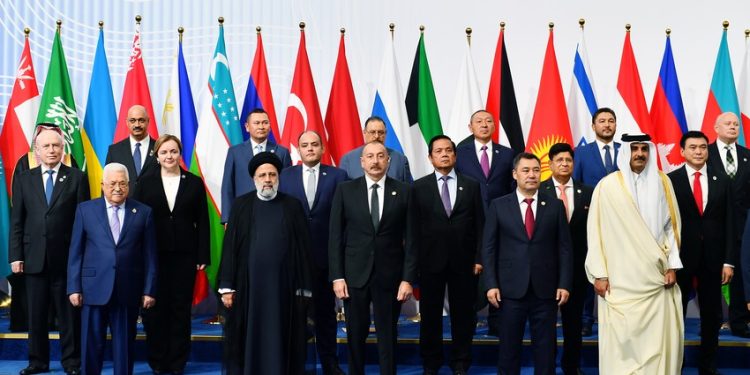 “Azerbaijan is among the countries most contaminated with landmines in the world. According to preliminary estimates, Armenia planted more than one million landmines in Azerbaijan,” Aliyev told regional leaders in the Kazakh capital Astana, where the Conference on Interaction and Confidence-Building Measures in Asia (CICA) summit is being held.

“In parallel with demining, now Azerbaijan is also carrying out large-scale construction works at the expense of its own resources in the territories freed from occupation,” the president said.

“During the nearly 30-year occupation by Armenia, our cities and villages, cultural and religious monuments, mosques were purposefully destroyed, insulted and looted. Even mosques were used as stables for keeping animals,” Aliyev said.

Saying that Armenia systematically committed war crimes against the civilian population and soldiers of Azerbaijan, Aliyev pointed out that since the first Karabakh war, about 3,900 Azerbaijani citizens are considered missing. “Most of them were tortured, killed and buried in mass graves. We discovered mass graves this year in two liberated villages.”

“Those, who committed war crimes against Azerbaijan have been presented as heroes in Armenian community,” he added.

Relations between the former Soviet republics of Armenia and Azerbaijan have been tense since 1991 when the Armenian military illegally occupied Karabakh, a territory internationally recognized as part of Azerbaijan, and seven adjacent regions.

During the 44-day conflict, Azerbaijan liberated several cities and around 300 settlements and villages that had been occupied by Armenia for almost 30 years.

The fighting ended with a Russian-brokered agreement on Nov. 10, 2020, which was seen as a victory for Azerbaijan and a defeat for Armenia.

However, the cease-fire has been broken several times since then.

Provocative actions by Armenia cause serious damage to the normalization process between Baku and Yerevan and aggravate the situation, Azerbaijan’s Foreign Minister Jeyhun Bayramov said on Wednesday.

Speaking at the meeting of the Council of Foreign Ministers of the Commonwealth of Independent States (CIS) in Astana, Bayramov commented on the situation following the 44-day war with Armenia in 2020 and said that Yerevan’s provocations damage international efforts for long-term peace and stability in the South Caucasus.

According to a written statement by Azerbaijan’s Foreign Ministry, Bayramov said that Armenia has yet to fully implement the tripartite declarations signed following the war and that Armenian soldiers have still not fully withdrawn from Azerbaijani territories.

Azerbaijan also drew attention to the “recent military provocation” that started on Sept. 13-14 with an attempt to lay mines along the security roads used by Azerbaijani forces in the border zone and caused numerous casualties, the ministry said.

Last month, at least 286 people were killed on both sides before a U.S.-brokered truce ended the worst clashes since 2020, when simmering tensions escalated into all-out war.

Following the clashes, the European Council last week said Armenia and Azerbaijan had agreed to a civilian European Union mission alongside the countries’ border.

The civilian European Union mission will start in October for a maximum of two months.

Bayramov added that the end of the conflict created new opportunities to achieve long-term peace and stability in the region “through the restoration of economic and communication relations.”

“In particular, it was pointed out that the importance of the region will increase after the opening of the Zangezur corridor, which will serve to increase transit opportunities and strengthen the investment environment in general.”

Zangezur was part of Azerbaijan, but in the 1920s, the Soviets gave the region to Armenia. After this move, Azerbaijan lost its link with Nakhchivan and some parts of the railway between the two countries were destroyed.

Azerbaijan has focused on projects in the Zangezur corridor, which will include highways and rail lines stretching across territories in Armenia’s Syunik region.

Once those parts are repaired, Azerbaijan will be able to reach Iran, Armenia and Nakhchivan uninterruptedly by train.