The International Institute for Rights & Development – Geneva (IRDG) would like to draw to the international community’s attention to the important threat to the population posed by landmines, unexploded ordnances and other explosive remnants of war left on the Azerbaijan territory, in the aftermath of the Azerbaijan – Armenian past conflicts in the Karabakh region. 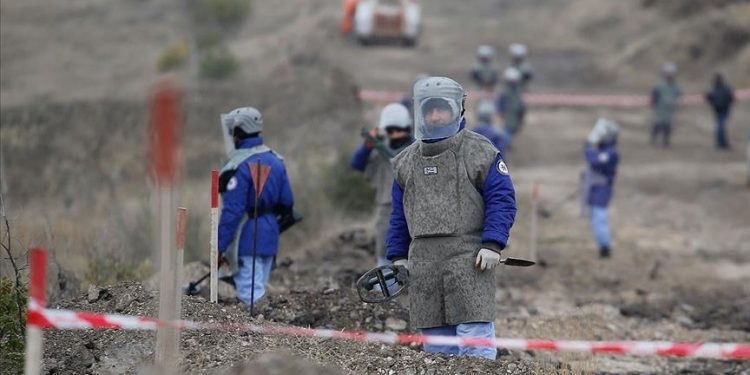 Our organization is a Swiss non-governmental organization in special consultative status with the Economic and Social Council (UNECOSOC) since 2018. We are committed to the promotion of human rights, individuals awareness and bring capacity building programs in post conflicts areas. In the end of 2021, our Institute (IRDG) had visited the Karabakh region of Azerbaijan and met with the Mine Action Agency of the Republic of Azerbaijan (ANAMA), the Azerbaijan body in charge of the remnants of war clearing, at the management level, as well as the operational level on the field.

Azerbaijan is currently addressing the clearance of remnants of war with all the means at its disposal but it is also working to address the problem of internally displaced people, representing an estimated 750’000 people, in addition to 250’000 refugees.

However, the contaminated areas are vast, the number of victims in need of assistance is overwhelming and the resources allocated are small in comparison with the complexity and magnitude of the problem. For the time being there is no possible return for the population until the region has been cleared completely from its remnants of war.

As per all country that has been affected by such traumatic ordeal, clearance of remnants of war in Azerbaijan will need time, but it will also need the involvement and supportive actions from the United Nations, in addition to the collaboration of countries linked to the conflict. Most victims of this kind of issue are affected mainly -but not only- in the period immediately following a conflict, therefore it’s very important to undertake actions in the shortest possible time. The social harm caused by remnants of war is incompatible with sustainable development and the three fundamental aspects of human well-being: Economic development, Environmental sustainability and Social inclusion.

“Azerbaijan has become the most contaminated country in the world” with over 7,000 sq/km (7,000,000,000 sq/m) reported as contaminated with mines and other types of explosives.

Annually enormous resources are allocated by Leading International Financial to address anti-mine bans related challenges and to protect human rights in general. And the fact that Azerbaijan is on the top of the list should be taken into serious consideration while distribution and utilization of these resources.

Over almost 30 years, 20% of Azerbaijan territory has been occupied by Armenian armed forces. Along an extended former line of contact large numbers of landmines were laid, and are now found in areas that are a high priority for the return of displaced people. The area includes ghost towns that have been uninhabited over the 30 year period, and where ERW contamination is often present.

After the 44-day war that ended in November 2020, 11,784 sq km of land was liberated. Since then clearance has focused on roads, power lines, railways, water supplies, communication and other infrastructure. A total of over 6,000 Ha has been cleared and more than 27,000 mines and unexploded ordnances (UXO) have been destroyed by ANAMA.

At the same time other state agencies such as the Azerbaijan Ministry of Defense have also been active. The MoD has cleared almost 13,000 Ha and destroyed over 16,000 mines and UXO. The MoD has focused on clearance of open areas, such as agricultural land, which offer clearer land release processes, while working with ANAMA to develop a common system of national requirements, in line with International Mine Action Standards.

Within former line of contact (of approx. 1 and a half billion m2 of contaminated land) the threat consists of a mix of anti-personnel (AP) blast, fragmentation and bounding mines as well as anti-tank (AT) mines. The threat includes minimum metal content mines that are more difficult to detect. The majority of mines are Armenian manufactured and laid.

There remains much uncertainty about the implications of the contamination and the demands on resources and time necessary to free the region from this threat to lives and livelihoods of the people of Azerbaijan.

While there is greater clarity about the situation along the former line of contact, it is becoming increasingly clear that there are additional mined areas associated with the retreat of Armenian forces through the liberated territory. Demining and survey teams have been active throughout the area over the last years and have started identifying some of those additional areas. It is expected that further similar hazardous areas will come to light as the survey and clearance work continues.

The most obvious immediate impact is the death and injury suffered by returning people. Between 2020 and November 2021, 25 people have been killed, the most recent in November 2021, 44 people have been injured, including 1 female and 3 child. These figures cover civilians only. Other accidents have involved military personnel working in the liberated areas.

Constraint for reconstruction of infrastructure

Impediment to rehabilitation of settlements and IDP/Refugee return

There is huge pressure to allow internally displaced people (IDPs) to return to areas from which they have been excluded for so long. The combination of direct risks to them from mines and UXO, and the delays associated with having to clear land before any reconstruction, presents further challenges for Azerbaijan.

Mine Action is a precondition for safe IDP return/resettlement & socio economic development in the liberated areas.

Immediately after the war, displaced people wanted to return to their hometowns. As part of renewing their emotional connection with the land of their parents and grandparents, many wish to visit cemeteries to pay their respects to members of their families. Such places are themselves contaminated with abandoned explosive items including AP mines. In some cases trench lines and other high risk military positions run right through cemeteries adding to the ERW threat faced by returning people.

Blockage for economic activities such as agricultural production

Until the people are free to go about their lives safely and without fear (of landmines and UXO), they are unable to engage in economic activity for their own and local livelihoods, and contribute to the wider social & economic situation in Azerbaijan.

Despite of resources allocated by the Government, the Mine Action in Azerbaijan remains severely underfunded to respond to existing needs. Moreover, the Azerbaijan Mine Action Agency, ANAMA is also in need of technical expertise & assistance and in- kind contributions such as mechanical mine clearance machinery, related equipment, mine detecting dogs (MDDs). The current challenge is to scale up capacity to a level appropriate to the current needs and objectives.

As Mine Action is the entry point for any post conflict rehabilitation process and further development initiatives, involving international expertise and allocating resources will contribute to building a strong platform where network of both national and international stakeholders could better co-function in line with the international standards.

International assistance will help save lives, enable IDPs to return to their homes in safety and dignity and bring sustainable development to the affected territories and people.