Could the EU displace Moscow as arbiter for Azerbaijan-Armenia?

Moscow is distracted and weakened by its invasion of Ukraine. Diplomatic Courier correspondent Nikola Mikovic writes that the EU could be poised to take advantage of the situation and displace the Kremlin as primary arbiter in the Azerbaijan-Armenia dispute. 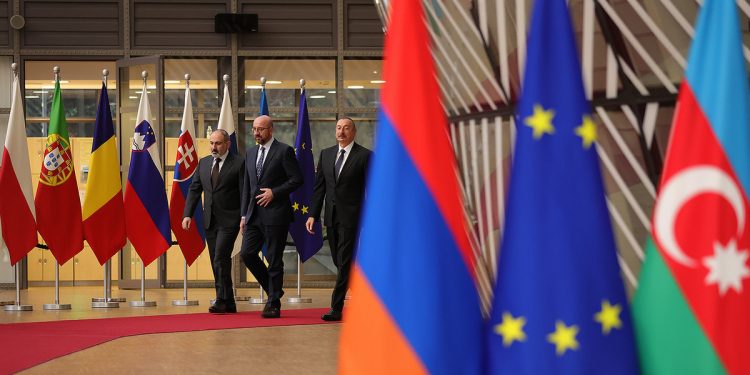 While all eyes are on the Russo-Ukrainian war, Azerbaijan and Armenia are seeking to normalize their troubled relationship. The Caucasus region is traditionally seen as within the Kremlin’s zone of influence. Now, however, there are indications that other major powers – namely the European Union and Turkey – aim to replace Moscow as the major mediator in the conflict between Baku and Yerevan.

Azerbaijan and Armenia’s conflict dates back to 1988, when they fought a war over the mountainous region of Nagorno-Karabakh. Since then, Moscow has positioned itself as the primary arbiter in the region. Over the years, the Kremlin has been selling weapons to both Armenia and Azerbaijan. In response to the 44-day war in 2020, Russia deployed around 2,000 peacekeeping troops to the conflict zone – internationally recognized as part of Azerbaijan, although Armenian forces had de facto control over the territory for more than two decades.

Negotiations between Baku and Yerevan have progressed primarily under the mediation of the Russian Federation side since the end of the 2020, when the two sides signed a ceasefire deal. Now that the Kremlin is preoccupied with the war in Ukraine, and has been isolated from the West, the future of Russia’s role as a major arbiter in region is questionable.

Being aware of Moscow’s unfavorable position in the global arena, the European Union is attempting to position itself as a new mediator in the Nagorno-Karabakh dispute. On April 6, the President of the European Council Charles Michel initiated a meeting between Azerbaijan’s President Ilham Aliyev and Armenia’s Prime Minister Nikol Pashinyan. The two leaders met in Brussels and discussed the implementation of the current ceasefire agreement. As a result, they agreed to establish the Joint Border Commission that will delimit the bilateral border between Armenia and Azerbaijan, and ensure a stable security situation along, and in the vicinity of, the borderline.

A day before the meeting, United States Secretary of State Antony Blinken spoke over the phone with both leaders, which suggests that Washington is also interested in the Caucasus peace process. At the same time, the Armenian opposition held a large-scale rally in Yerevan fearing that Pashinyan is ready to “include Artsakh (Armenian name for Nagorno-Karbakh) in Azerbaijan”. Baku, as the winner of the 44-day war, expects Yerevan to adopt five basic principles for the normalization of relations between the two countries. From Azerbaijan’s perspective, the two sides should recognize each other’s territorial integrity, promise not make claims to each other’s territory in the future, not threaten each other’s security, demarcate the border, and unblock transportation links.

In Armenia, however, the vast majority of the landlocked country’s population opposes a deal that would define Artsah as part of Azerbaijan. According to recent surveys, most Armenians would prefer to see the region either as an independent country or as part of Armenia. More importantly, Yerevan does not seem to be interested in the construction of a Nakhchivan corridor (also known as Zangazur corridor), or at least not under Azerbaijan’s conditions.

“The Armenian side will not agree to provide a road to Azerbaijan without customs control and duties”, Pashinyan stressed in December 2021.

A potential re-opening of regional transportation routes is in the interest of both Yerevan and Baku, given that it would connect Armenia with its ally Russia, through Azerbaijan’s territory, and Azerbaijan with its ally Turkey, through Armenian territory. China would likely also benefit from the construction of the Nakhchivan corridor, given that it could become part of Beijing’s Belt and Road Initiative.

Although the construction of Zangazur corridor is one of Baku’s top priorities, the energy-rich Azerbaijan seems to be looking for an alternative way to establish a land link to its Nakhchivan exclave. That is why Baku recently signed a transportation deal with Iran, aiming to build a road to Nakhchivan that would bypass Armenia. On the other hand, the Zangazur corridor passing through Armenian territory would provide Russia with a stable transportation route to its ally, as well as a stable overland link with Turkey. That is one of the reasons why the Kremlin is attempting to preserve good ties with both, Armenia and Azerbaijan.

During the recent clashes in Nagorno-Karabakh, Azerbaijani troops established control over the village of Farrukh, which had been under the protection of the Russian peacekeeping forces since 2020. The Russian Defense Ministry accused Baku of violating the ceasefire deal, while Mikhail Delyagin, the deputy chair of the Duma’s Economic Policy Committee, said that Russia should “directly and harshly punish Azerbaijan”. He even suggested that Moscow should use nuclear weapons against the Caucasus nation. The Kremlin had to react to ease tensions. Its spokesman Dmitry Peskov said that Delyagin should “control emotions and refrain from such statements.”

Although Russia sees both Armenia and Azerbaijan as its “near abroad”, a geopolitical shift brought about by Russia’s invasion of Ukraine means the Kremlin may no longer be able to maintain its position as the sole major power operating in the Caucasus. The United States’ embassy in Yerevan has already warned Armenia of possible negative economic consequences it is pursues “cooperative deals with Russian military-intelligence companies”, even though the country is member of the Russian-led Collective Security Treaty Organization.

However, the very fact that Pashinyan is expected to meet with the Russian President Vladimir Putin in the near future suggests that the Kremlin will unlikely voluntarily give up its strategic ambitions in the region any time soon, if at all. Thus, Moscow will almost certainly attempt to preserve Armenia – and possibly Azerbaijan – in its sphere of influence, although Yerevan and Baku will undoubtedly seek to increase their cooperation with the European Union.