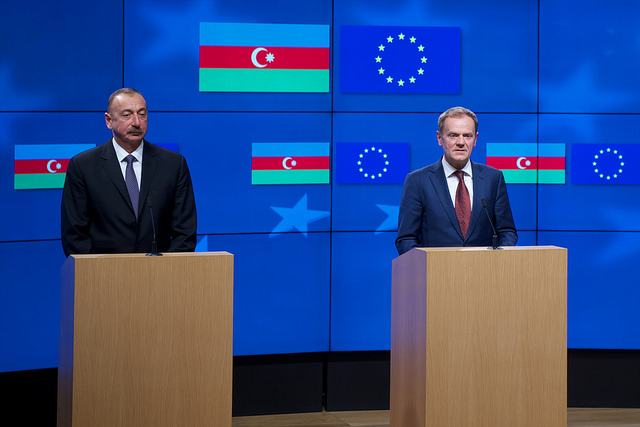 The conflict between Armenia and Azerbaijan over Nagorno-Karabakh appears intractable to many observers. Nevertheless, in the aftermath of the latest war in 2020, there are now some (limited) prospects for peace, building on diplomatic initiatives from the OSCE as well as individual states such as Russia.

One approach to conflict resolution that has frequently been cited in relation to Nagorno-Karabakh is the so called ‘South Tyrol model’, inspired by the predominantly German-speaking autonomous province in northern Italy. In South Tyrol, territorial autonomy has helped transform a once violent conflict into institutionalised coexistence. Yet it remains an open question as to how realistic it would be to adapt this model to the Caucasus.

The key aim of the South Tyrol approach would be to establish a durable and constitutionally anchored autonomous self-administration of Nagorno-Karabakh. This would include ethnic proportionalities (a proportional representation model in the government and public administration) and international safeguards for stabilisation in the face of further conflict. There would be far-reaching autonomy for Nagorno-Karabakh, but with primary and secondary legislative rights within Azerbaijan. This may also apply to the seven districts that are now, following the 2020 war, again under Azerbaijani control, in order to promote regional unity and reconciliation.

The South Tyrol model was publicly brought up by Azerbaijan’s President, Ilham Aliyev, as a possible conflict resolution strategy in October 2020, which led to both parties to the conflict temporarily calling on Italy as a mediating power. Yet in Nagorno-Karabakh, as in the South Tyrol conflict, the attitude of the protecting power is also decisive. In the case of South Tyrol, it was Austria. In the case of Nagorno-Karabakh, the situation is complicated by the fact that there are two protecting powers, namely Russia and Turkey. In addition, the role of Iran remains unclear.

A model of territorial self-government within one of the conflict states may be a viable path to building peace in Nagorno-Karabakh. The South Tyrol approach is indeed a good template for this. Nagorno-Karabakh is also a pluri-ethnic mountain area, and the model offers both sides the narrative of a success story, which might lend some legitimacy to the proponents of territorial autonomy from the outset.

On the other hand, there are key differences in the historical, political, cultural and religious backgrounds. While the South Tyrol model seems to be a good fit at first glance, at a time of ‘reglobalisation’, where the relations between states across the world are undergoing a series of profound changes, much would depend on contextual factors.

A successful implementation would also depend crucially on the will of all sides. The will to implement a model of territorial autonomy is undoubtedly lacking at present. In the short-term, any suggestion of fully implementing the South Tyrol model is therefore unlikely to be applicable, but discussing the model as a potential solution might nevertheless contribute to stabilising the situation. In the coming years, this could be a starting point for a declaration of principles as well as some tentative work on the adoption of specific clauses and mechanisms to move in this direction.

However, the record of previous experiences with autonomy in Nagorno-Karabakh has been decidedly mixed. Various forms of autonomy have been promised in the past, granted in part, and then subsequently taken away again. Given the vast majority of the Nagorno-Karabakh population is Armenian, and given the population in the surrounding districts is mainly Azerbaijani, the so-called ‘ethnic proportional representation’ approach pursued in South Tyrol hardly appears applicable. Despite these restrictions, however, self-administration is feasible in principle, including territorial fiscal sovereignty if suitable.

When the foundations of today’s South Tyrol model were laid in the 1970s, autonomy was negotiated between Austria and Italy. Both states shared the same religion and both states were democracies that wanted to reach a consensus following the experience of war.

This cannot be said of the two sides in the Nagorno-Karabakh conflict. Each adheres to a different religion and there are democratic shortcomings visible not only in each of the two states, but also in protecting powers such as Russia and Turkey. Moreover, as Erhard Crome has noted, the fact that both Austria and Italy are now members of the European Union has added a further layer of stability to the settlement in South Tyrol which would be absent in the Caucasus.

A final problem is the lack of involvement of civil society in the peace process. As Uwe Halbach notes, the conflict resolution process has taken place at the highest diplomatic levels, but civil society actors have been insufficiently involved. This is particularly important as there is currently little appetite for compromise among both sides and a high level of mistrust.

The complexity of the conflict makes it difficult to assess whether there is room for a new political initiative. Further negotiations and clarifications will ultimately be required. In the medium to long term, however, it is likely that without a tailor-made autonomy solution for Nagorno-Karabakh, the conflict will continue to smoulder, regardless of the willingness or unwillingness of those in power to pursue peace.

The international community should not wait for the next escalation. The domestic political crisis that began in Armenia in February, which was denounced as an ‘attempted military coup’ by Armenian Prime Minister Nikol Pashinyan, was a serious warning sign. It also remains to be seen how US President Joe Biden’s recent decision to formally recognise the mass killing of Armenians in the 20th century as genocide will impact on Turkey’s approach in the region. French president Emmanuel Macron’s multiple declarations of support for Armenia are a further factor.

Diplomatic gestures alone will not be enough to bring an end to the conflict. Painstaking detailed work on the ground will be necessary for there to be any hope of a lasting settlement. One thing that continues to hold true in Nagorno-Karabakh, however, is that history is a superhuman process made by human beings. Any conflict resolution strategy that is pursued will have to navigate the tension between what is possible and what cannot be influenced.

Roland Benedikter is a Research Professor of Multidisciplinary Political Analysis in residence at the Willy Brandt Centre of the University of Wroclaw, Poland. He is Co-Head of the Center for Advanced Studies of Eurac Research Bozen-Bolzano, in the Autonomous Province of South Tyrol, Northern Italy; and a Member of the ‘Future Circle’ (Zukunftskreis) of the German Federal Ministry of Education and Research (BMBF) for the German Federal Government.

The London School of Economics and Political Science