While Russia continues conducting its “special military operation” in Ukraine, Moscow’s ally, Armenia, has been seeking to normalize relations with its arch enemy, Azerbaijan. 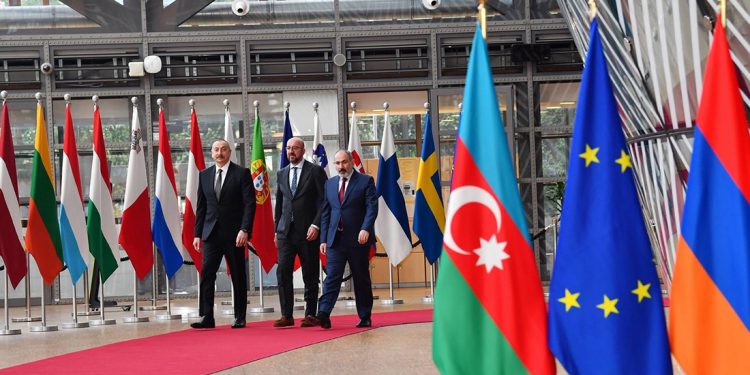 Although the South Caucasus region has traditionally been in the Kremlin’s geopolitical orbit, it is the European Union that seems to be playing the major role in peace talks, border delimitation and the reopening of transportation links.

In the past, Russia had mediated conflict between the two Caucasus countries over the Nagorno-Karabakh region. Although it is an internationally recognized part of Azerbaijan, it has been under Armenian control for more than two decades. In November 2020, Pashinyan and Aliyev traveled to Moscow to sign a ceasefire deal that effectively ended the 44-day war that Yerevan and Baku fought over the mountainous region.

As a result of the conflict, Azerbaijan restored its sovereignty over most parts of Nagorno-Karabakh, as well as surrounding areas. More importantly, Russia deployed about 2,000 peacekeeping troops, which strengthened its positions in the South Caucasus.

‘Karabakh Has Turned Into South Ossetia’

Russian forces are stationed mostly in parts of Nagorno-Karabakh that are still under Armenian control.

According to Tom Mutch, a New Zealand-born journalist who covered the 44-day war, such a position allows Moscow to turn the region into its de facto military state.

“Let’s be honest, Karabakh has turned into South Ossetia now,” Mutch told Toward Freedom, referring to Georgia’s breakaway region that Russia recognized as an independent state in 2008, following the brief war Moscow fought against its small neighbor. “Russia holds all of the political and military power in the region. But the problem is that the Kremlin is so distracted by what is going on in Ukraine that it doesn’t really have any ability to focus on Karabakh.”

Despite its preoccupation with the war in Ukraine, Russia hosted Azerbaijani and Armenian delegations on June 3 in Moscow, where they held the 10th meeting of the trilateral working group on the opening of regional transport communications. According to reports, representatives of the three countries discussed and coordinated on borders, customs, and other kinds of control, as well as safe transit of people, cars, and goods by roads and railways through the territories of Azerbaijan and Armenia.

Following the Brussels meeting in May between Pashinyan and Aliyev, Baku and Yerevan announced the creation of commissions for border delimitation. In other words, they would look into increasing movement between the two states.

Dr. Gulshan Pashayeva, a board member of Azerbaijan’s Center of Analysis of International Relations, claims that is one of the tangible results of the peace talks held under the EU auspices. Still, she does not think the EU can replace Russia as the major mediator in the South Caucasus.

“EU and Russia are quite different geopolitical actors with incompatible resources and influence,” she told Toward Freedom. “Therefore, they cannot replace each other.”

Both Azerbaijan and Armenia are members of the EU’s political and economic Eastern Partnership initiative. Russia, on the other hand, sees both countries as its allies—Armenia, through the military alliance, the Collective Security Treaty Organization, and Azerbaijan, in the form of the allied cooperation agreement signed in February.

No Agreement Without Moscow

According to Russian political analyst Sergey Markedonov, Russia and the West have always cooperated regarding the Karabakh issue. But the problem is Western powers no longer want to work with Moscow amid the Ukraine conflict.

Meanwhile, Mutch said Nagorno-Karabakh could be a place Russia and the EU can cooperate, despite their strained relations regarding Ukraine.

“But I don’t see any agreement that can be signed without Moscow’s final say,” he stressed.

In his view, the real reason why peace talks seem like they are making progress is the military defeat of Armenia in 2020.

“The speech that Pashinyan made in April was widely seen as signaling that he was prepared to give up Armenia’s aspirations for a de jure independent status of Karabakh,” Mutch said. “That was the sticking point of negotiations for the past 25 years.”

In that speech on April 13, the Armenian prime minister said, “The international community is telling Yerevan to lower the bar on the status of Nagorno-Karabakh.” He pointed out Armenia “cannot rely on international partners, not because they do not want to help the landlocked nation, but because they cannot help.”

Pashinyan also recently emphasized that the most important and most urgent issue between Armenia and Azerbaijan is the Nagorno-Karabakh issue. For Baku, however, the status of the mountainous region has already been resolved.

The most important and most urgent issue between Armenia and Azerbaijan and for the peace in our region is the Nagorno-Karabakh issue. pic.twitter.com/oT1eCluiOE

“I strongly believe that Armenia will come to understand that there will be no special status for ethnic Armenians living in the Karabakh region of Azerbaijan,” Samir Mammadov told Toward Freedom. He heads the international affairs department at “Back to Karabakh” Public Union – a political organization that aims to return ethnic Azeris to Nagorno-Karabakh.

“Armenian government officials often claim that they want the rights of Armenians living in Azerbaijan to be respected. Azerbaijan can and will ensure that without allowing the creation of an artificial autonomy within its borders,” Mammadov said, pointing out that if Yerevan continues insisting on the status of Karabakh, Baku will “probably raise the issue of the rights of Azerbaijanis ethnically cleansed from Armenia.”

In other words, Baku expects Yerevan to recognize Azerbaijan’s territorial integrity, while Armenia fears full implementation of the ceasefire deal the two sides signed in 2020 in Moscow would jeopardize the landlocked nation’s sovereignty. According to the Moscow agreement, “Armenia shall guarantee the security of transport connections between the western regions of the Republic of Azerbaijan and the Nakhchivan Autonomous Republic in order to arrange unobstructed movement of persons, vehicles and cargo in both directions.”

The Fate of a Corridor

Russian Foreign Minister Sergey Lavrov recently assured Armenian officials the future railway and highway that will connect Azerbaijani mainland with its Nakhchivan exclave through southern Armenian will be “based on the recognition of the sovereignty of Armenian territory.”

For Azerbaijan, the future transportation route should be part of the Nakhichevan Corridor, also known as the Zangezur Corridor.

“The narrative of the wording of a so-called corridor is unacceptable for Yerevan,” Pashinyan said in a June 13 interview. “We have one corridor in our region, and this is the Lachin corridor connecting Nagorno-Karabakh with Armenia.”

That corridor is a mountain road that is de jure in the Lachin District of Azerbaijan, but is under the control of a Russian peacekeeping force as a result of the 2020 ceasefire deal.

Thus, the future of transportation links in the South Caucasus will almost certainly be on the agenda of future meetings between Pashinyan and Aliyev, be it in Brussels or in Moscow.

“The EU is ready to step up its support,” Michel said in a May 23 statement. “We agreed to remain in close contact and will meet again in the same format by July/August.”

Meanwhile, Lavrov is planning to meet today in Azerbaijan, which can be viewed as Russia’s attempt to keep both Armenia and Azerbaijan in its geopolitical orbit, despite the EU’s recent new role as a major mediator.

Nikola Mikovic is a Serbia-based contributor to CGTN, Global Comment, Byline Times, Informed Comment, and World Geostrategic Insights, among other publications. He is a geopolitical analyst for KJ Reports and Enquire.