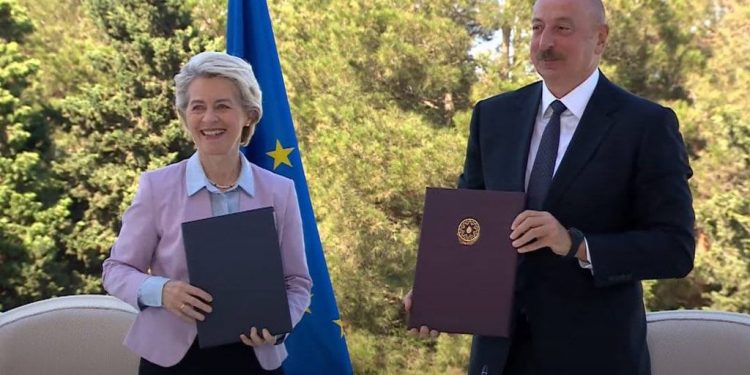 To boost the shipments, the capacity of the Southern Gas Corridor – a network of pipelines connecting the Caspian Sea with Europe – will be increased to 12 billion cubic meters from the current 8.1 billion, according to a memorandum of understanding signed with the 27-nation bloc Monday in Baku. In a few years, it will reach 20 billion cubic meters, European Commission President Ursula von der Leyen told reporters.

Russian gas supplies to Europe were no longer reliable, she said. “The EU has therefore decided to diversify away from Russia and to turn to more reliable, trustworthy suppliers. And I’m glad to count Azerbaijan among them.”

The EU is rushing to secure new gas supplies as it seeks to end dependence on Russia. Gazprom PJSC’s shipments to the bloc have already been reduced, and there are growing fears a shortage could occur if the key Nord Stream pipeline doesn’t fully return after maintenance, or if Moscow cuts off supplies entirely.

The agreement also aims to make use of Azerbaijan’s potential in offshore wind and green hydrogen, in line with the European Green Deal, a massive sustainable overhaul with the ultimate goal of climate neutrality by 2050. Azerbaijan will evolve from being a fossil fuel supplier to becoming a renewable energy partner, von der Leyen said.