Margarita Simonyan is one of Russian President Vladimir Putin’s main faces of propaganda and disinformation, both internationally and inside Russia. She is adept at serving up lies as truths — and with a smile. 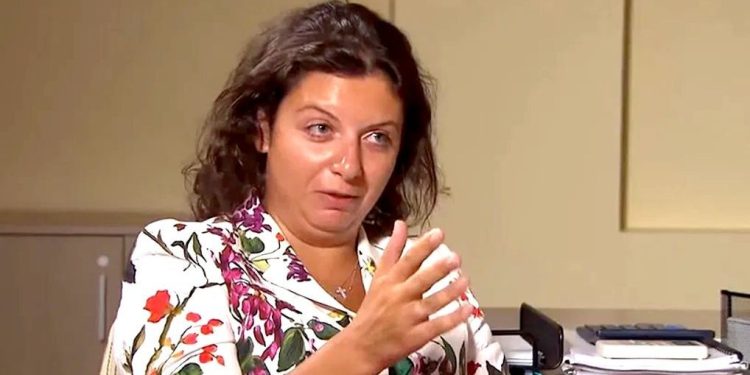 Margarita Simonyan started her career  in Kremlin-funded and controlled media in 2001 as a journalist for the All-Russia State Television and Radio Broadcasting Company (VGTRK). In 2005, she became editor-in-chief of Russia’s first state-funded English language media outlet, RT, formerly known as Russia Today. She maintains her RT position  while simultaneously serving as editor-in-chief of Rossiya Segodnya, editor-in-chief of TV-Novosti, and co-founder of the Association for the Development of International Journalism. Despite the many hats she wears, her main function is Vladimir Putin’s loyal propagandist.

A Lifetime of Lies

Throughout her career, Simonyan has supported the Kremlin’s agenda by disseminating disinformation and propaganda. Before becoming editor-in-chief of RT, Simonyan worked in the Kremlin’s pool of journalists covering President Putin. She rose to fame after reporting about the 2004 Beslan school terrorist attack in the North Caucasus. The YouTube channel of Russian opposition leader, Aleksey Navalny, who is currently in a maximum-security prison following politically-motivated convictions, accused Simonyan of purposefully lying  during her Beslan broadcasts in order to serve Kremlin priorities. Despite Russian authorities knowing the truth, Simonyan did not mention that the terrorists said they would release hostages if Russian soldiers left Chechnya, and she under-reported the number of hostages. The Kremlin subsequently rewarded Simonyan by appointing her head of Russia’s first state-funded English language media outlet, RT (then called Russia Today), when she was only 25 years old.

For years, Simonyan has openly voiced her support for disinformation and propaganda. In a 2012 interview  covering RT’s work during Russia’s 2008 invasion of Georgia, she stated, “the Ministry of Defense was at war with Georgia, and we waged an information war, and with the entire Western world.” In a 2013 interview , she said, “the information weapon, of course, is used in critical moments, and war is always a critical moment. And it’s war. It’s a weapon like any other.” Although Simonyan professes to be a journalist, she blatantly supported  reversing the prohibition on media censorship in the Russian constitution, stating that “no big country can exist without control over information.” Despite her disapproval of so-called Western values, such as respect for freedom of speech and freedom of expression , RT’s slogan is “question more” and attempts to present itself as a dissenting voice.

Simonyan cemented her role as a prolific purveyor of Kremlin disinformation as Russia further invaded Ukraine. Before February 2022, like other Kremlin  disinformers , she denied  that Russia would take military action against Ukraine, claiming she was “absolutely convinced that Russia is not going to start a war with Ukraine, and this will not happen in any way.” Since Russia’s February 24 full-scale invasion, Simonyan has increased her bellicose language, twice  indicating  that Russia could use nuclear weapons. In June 2022,  Simonyan insinuated that the Kremlin wished for global food insecurity when she ended a story with the punchline, “all our hope is in the famine.” She claimed that a positive result of global hunger would be the lifting of global sanctions Russia. The Kremlin continues to spread disinformation about food insecurity, blaming it on sanctions imposed on Russia for its war against Ukraine, even though U.S. sanctions include carve-outs relating to agricultural, medical, and other humanitarian transactions.

Putin’s disinformation and propaganda is a lucrative business, and not just for Simonyan. In 2020, Navalny and his team published a two-part  investigation  into Simonyan and her family’s corrupt financial gains. One of the investigations focused on Simonyan’s husband , Tigran Keosayan, who is also in the disinformation and propaganda business. Since 2016, Keosayan has hosted a political comedy TV show called “International Sawmill with Tigran Keosayan,” which is produced in the style of American late-night television political comedy. Instead of making fun of the government, Keosayan’s comedy supports Putin. According to the Navalny investigation, Simonyan is the TV show’s artistic director.

Keosayan uses state-funded resources  to film his show and sells it to a state-funded broadcaster at an inflated price. Gold Vision, Keosayan’s studio, sells each episode of “International Sawmill” to the state-funded NTV for 3.4 million rubles. At an average of 35 episodes a year, NTV pays Gold Vision nearly 120 million rubles (about $2 million).i Moreover, International Sawmill films its episodes at the studios of Kremlin-funded RT, where Margarita Simonyan is editor-in-chief. About ten full-time employees of RT work on International Sawmill each week. Most do not receive payment from the Gold Vision studio for their work. According to Navalny’s 2020 investigation, in addition to using state funds to produce the television program, Keosayan and Simonyan make above market value profits from advertising by state-owned airline company, Aeroflot. Simonyan and Keosayan have developed these schemes to use their access to federal funds to make a personal profit.

Canada,  the United Kingdom  and the European Union  have sanctioned both Simonyan and Keosayan due to their dissemination of Kremlin disinformation regarding Russia’s war against Ukraine. Kazakhstan has banned Keosayan  from the country due to his perceived threats to Kazakhstan’s sovereignty.

Being a Kremlin Mouthpiece Pays Well

Simonyan and her husband wrote and directed the 2018 film “Crimean Bridge,” which was meant to build national pride in a recently constructed bridge linking Russia to Russia-occupied Crimea. The film received 100 million rubles from the state-funded organization Cinema Foundation. The film was a Simonyan-Keosayan family affair with Keosayan directing the film and Simonyan writing the script. In addition, Keosayan’s brother, two daughters, ex-wife, nephew, and nephew’s wife all earned significant sums of money for their participation in the film. In total, the Simonyan-Keosayan family made 45 million rubles from the film, all drawn from government coffers. This was in stark contrast to the budget for all the actors in the film, which was only 10 million rubles. Film critics and the viewing public negatively reviewed  the film and it was a box-office bust.

Despite Navalny’s investigations exposing the Simonyan-Keosayan family’s corruption, the Russian government has yet to prosecute the couple. It appears that because Simonyan has dedicated her life to spreading disinformation and propaganda in service to the Kremlin, the Kremlin will continue to support her financially.