Romania's Foreign Minister Bogdan Aurescu highlighted on Friday the importance that the European Union attaches to the countries in its Eastern Neighbourhood, as well as the EU interest in an increased involvement in the region, including in order to solve prolonged conflicts, in talks in Baku with President of the Republic of Azerbaijan Ilham Aliyev and with head of Azerbaijani diplomacy Jeyhun Bayramov. 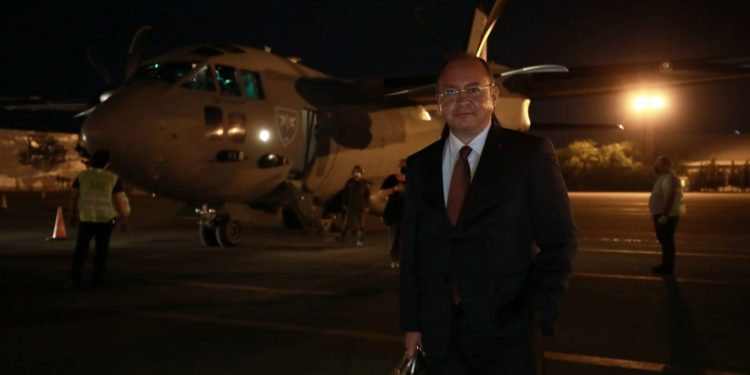 According to the Romanian Foreign Ministry (MAE), Aurescu welcomed the recent progress in relations between Azerbaijan and Armenia and voiced EU support for continuing efforts to ease tension between the two countries, including the release of detainees in Azerbaijan following the conflict last year and to facilitate the submission by Armenia of the necessary maps for demining operations, with the aim of developing, as soon as possible, a positive agenda for cooperation in the South Caucasus, agerpres reports.
He pleaded for more exchange of persons detained in reciprocity with the submission of maps for demining. Other related issues were also discussed, such as the delimitation of borders between the parties and access of humanitarian organizations to the conflict-affected area, and the potential for EU involvement in the reconstruction of the area.

Aurescu also voiced support for the need of measures to be adopted to increase trust between the parties, post-conflict rehabilitation and stabilisation, to which the EU can contribute, and steps to reconcile the two societies. He also said that, as proposed at the Lisbon meeting in May, the EU was encouraging increased co-operation among the three states in the South Caucasus, a trilateral format that could be joined by the EU as a facilitator. Energy can also play a relevant role. Last but not least, he underscored the importance of concluding a comprehensive peace treaty that would resolve all outstanding issues.

Aurescu encouraged the Azerbaijani side to further deepen relations with the EU, including by finalising negotiations on the New EU-Azerbaijan Agreement, which will provide a comprehensive framework for co-operation, as well as by seizing the opportunities offered by the Eastern Partnership, with the Azerbaijani President agreeing on immediate resumption of negotiations and setting as its objective its signing by the end of the year. Aurescu underscored that Azerbaijan is an important partner of the EU in terms of its contribution to ensuring European energy security and its geostrategic position, and pointed out that Azerbaijan is essential for the stability, security and prosperity of the South Caucasus region.

At the same time, Aurescu underlined the importance of a very good preparation of the Eastern Partnership Summit in December, with the Azerbaijani President maintaining his country’s interest in a constructive commitment to the summit.

Aurescu and senior Azerbaijani dignitaries mentioned the excellent state of relations between Romania and Azerbaijan, as Romania was the first EU member country to conclude a strategic partnership with Azerbaijan, in 2009, and 2021 marks 30 years since Romania recognised Azerbaijan’s independence. In his conversations with his Azari counterpart, he underlined the importance of the Black Sea -Caspian Sea freight corridor project promoted by Romania, Georgia, Azerbaijan and Turkmenistan, for the growth of the regional community and for the intensification of the Romanian-Azerbaijani exchanges.

Aurescu was on a two-day regional tour in the South Caucasus with Austrian Foreign Minister Alexander Schallenberg and Lithuanian Foreign Minister Gabrielius Landsbergis under a coordinated mandate with EU High Representative for Foreign Affairs and Political Affairs Josep Borrell. The tour is a first concrete result of debates at the Informal Meeting of Foreign Ministers (Gymnich format) of Lisbon on 27 May.