Ever since the end of the latest round of Armenian-Azerbaijani fighting last year and the insertion of Russian peacekeepers in Qarabagh, Azerbaijanis have been talking about the possibility of the establishment of Turkish bases on their territory to balance Moscow and ensure Azerbaijan’s independence of action. 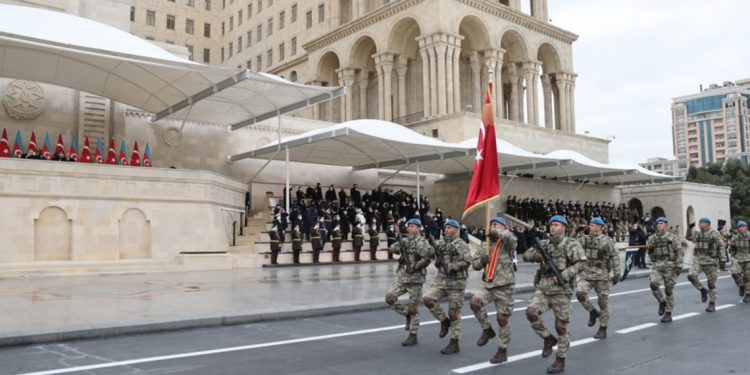 Turkish and Azeri Presidents hail troops in Baku in a military parade on December 2020.

Those discussions expanded after Turkish President Redcep Tayyip Erdogan said several weeks ago that the November and January declarations do not preclude the opening of Turkish bases in Azerbaijan, although he added that this was not an issue of immediate concern but one that needed thorough discussion with all parties involved.

The Azerbaijani government and Azerbaijani politicians have treated this possibility with extreme care, generally preferring not to say anything lest doing so provoke a Russian reaction in the form of greater support for Armenia and an expanded Russian presence in Qarabagh. But the Azerbaijani people have gone on line to weigh in both for and against the idea.

Nadir Kerimov has assembled some of their comments which range from assertions that “Turkish bases already exist in Azerbaijan” but have not yet been publicly announced to arguments that any Turkish base on Azerbaijani soil would bring nothing but problems, given that it would like Baku with NATO and set it against Moscow (iarex.ru/articles/81493.html).

The journalist says that Azerbaijanis also divide on whether proposals for such bases emanate from Turkey and Azerbaijan or from the West and focus instead on the issues of what the presence of such bases would lead to, given that Moscow would almost certainly be alarmed and respond.

Kerimov’s selection appears designed to indicate that Azerbaijanis are divided on the issue and that Moscow has the whip hand in that if it sends a clear message that it would oppose such a step by Turkey and Azerbaijan, those two Turkic countries would be unlikely to move in that direction.

After all, if the presence of some Turkish troops on Azerbaijani territory would mean that Moscow would put more Russian troops in Qarabagh and dig in its support of Yerevan, then from Azerbaijan’s point of view, the quotations Kerimov offers suggest, Azerbaijan might very well lose more than it would gain.

Whether these views of the population reflect the views of the governments in Baku and Ankara is difficult to say, but they at least are evidence that the issue is being discussed, something  that by itself is likely to be worrisome to Moscow which had not assumed that such questions could even be asked.