The official opening ceremony of Rize-Artvin Airport on the Black Sea coast of Turkey took place on May 14, 2022. President of Turkey Recep Tayyip Erdogan and President of Azerbaijan Ilham Aliyev attended the ceremony. 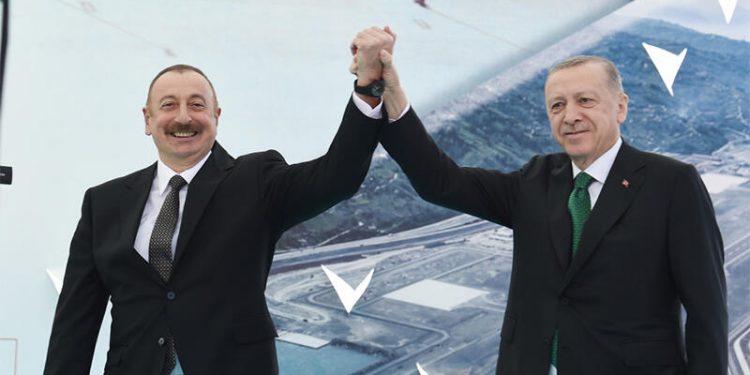 The airport’s great strategic and economic importance for Turkey is clear from the mere fact that it was built on the Black Sea coast, with part of the coastal strip dried up and filled, using about 100 million tons of rocks.

The newly built Rize-Artvin Airport became the second in Turkey and the fifth in the world to be built on land reclaimed from the sea. Since the Black Sea coast of Turkey has a rather complex topography of the coastline (with the sea on one side and rugged mountains on the other), it is difficult to build airports there, as they require free space for flight safety.

Recently, however, the region has become one of the most dynamic ones in Turkey, with important strategic land, sea and air corridors from Europe to Asia running through it (especially after the closure of transit corridors and the Ukrainian and Russian Black Sea ports because of the ongoing hostilities), carrying passengers and cargo to the South Caucasus region, and from there on to Central Asia and the Far East.

The need for a new modern airport in the region was justified, since there had only been one small international airport before, in the city of Trabzon, the use of which was limited by types of aircraft it can handle, and the weather conditions, as the airport is sandwiched between the sea and the mountains.

That is why, at the initiative of Turkish President Recep Tayyip Erdoğan, it was decided to build in this important region the new unique Rize-Artvin International Airport on an embankment, capable of handling all types of aircraft.

It is probably very difficult to find two other brotherly nations in the world that are close enough to share all their joys and sorrows with each other.

In view of the fraternal alliance between Azerbaijan and Turkey, the head of the Turkish state Recep Tayyip Erdoğan invited his friend and brother President Ilham Aliyev to inaugurate the airport and share with him the joy of this event.

As we know, Rize Province is the second home of President Recep Tayyip Erdoğan, whose parents were originally from there, and he is always proud to do his best for the economic development of this region.

Apart from the strategic transport corridors running through this land, the Black Sea coast is an important agricultural region, where a significant part of Turkish exports, hazelnut and tea, are produced, as well as a promising area for tourism development.

Given all these factors, the substantial public funds invested in the construction of the airport will pay off in the future through the growth of economic activity and development of the region.

It is no secret that the Azerbaijani and Turkish leaders take every opportunity to keep in touch and meet personally to discuss bilateral and international issues.

The close personal relationship between the Presidents of Azerbaijan and Turkey is a true example of brotherhood serving the interests of the peoples of both states. Each personal meeting of the two leaders raises the level of interstate relations to a new, higher level.

President Ilham Aliyev’s participation in this important event and his speech there are another evidence that relations between our countries are of allied nature and continue to strengthen and grow.

In his speech President Ilham Aliyev emphasized the invaluable support given to Azerbaijan by Turkey and President Recep Tayyip Erdoğan from the first day of the Second Karabakh War.

As Ilham Aliyev said, it was thanks to this fraternal support that Azerbaijan had been able not only to counter the enemy on the battlefield, but also to neutralize Armenia’s secret patrons abroad who were trying to interfere.

President Ilham Aliyev praised the role of President Recep Tayyip Erdoğan as his close friend, an outstanding Turkish statesman, and one of the leaders of the Turkic world in transforming Turkey into one of the strongest and most influential powers of the modern world. He highly commended the Turkish president on turning Turkey into a modern, powerful and economically developed country relying on its own power and economy, and his efforts to develop Turkey’s regions and, in particular, the Black Sea coast of Turkey.

Speaking about Turkey-Azerbaijan relations, President Ilham Aliyev emphasized that after signing the historic Shusha Declaration in June 2021, the relations between the two countries rose to a new level of an alliance. By signing the Shusha Declaration, Azerbaijan, a member of the Non-Aligned Movement with a non-aligned status enshrined in the Constitution, formalized its relations with its natural ally Turkey, with which it shares ethnic, cultural and historical roots.

President Ilham Aliyev pointed out in his speech the evolutionary nature of relations between the brotherly countries, as they grew from a friendship into an alliance, thus confirming the historical legacy of the ancestors whose will was for the Turkic peoples to be united in the name of the future.

Now, in the period of peaceful construction, Turkish companies are actively involved in the reconstruction of the liberated Azerbaijani territories, carrying out construction work efficiently and promptly.

This closeness of the two countries is unparalleled in the world and is an example for other countries to follow.

President Ilham Aliyev’s speech was enthusiastically received by a crowd of many thousands of cheering Turkish citizens, which once again testified to the centuries-old unbreakable brotherhood of the two countries.

Probably no speech of any other foreign leader visiting Turkey before a Turkish audience could have been as highly appreciated by that audience as the brilliant speech made by President of Azerbaijan Ilham Aliyev.

Having a loyal and close ally in Turkey, which Azerbaijan can always rely on, has a positive impact on the independent domestic and foreign policies of our country. Azerbaijan and Turkey, with their similar views on many aspects of international politics, have always been united in their positions based on the respect for international law, territorial integrity and non-interference in each other’s internal affairs.

This policy pursued by the leaders of Azerbaijan and Turkey contributes to strengthening stability and security both in the region and around the world.

Summing up the working visit of President Ilham Aliyev to Turkey, one may say that it was another important milestone in the relations between the two allied states once again demonstrating to the world that Azerbaijan and Turkey continue to develop and strengthen their multilateral ties for the sake of the future of their peoples.