The Russo-Ukrainian war has had a direct impact on the status of the various China–Central Asia–Russia–Europe transit corridors that traverse Eurasia. 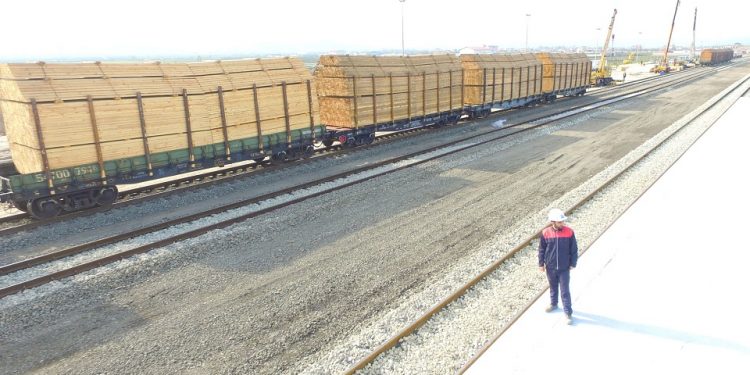 The Northern Corridor branch of China’s Belt and Road Initiative (BRI), in particular, has faced serious challenges and limitations, forcing a halt to the so-called “New Eurasian Land Bridge” project, linking Russia, Ukraine, Poland and Belarus with East Asia. This has given new impetus to developing the so-called Middle Corridor—more formally known as the Trans-Caspian International Transport Route (TITR)—which starts from Southeast Asia and China, and, bypassing Russia, runs through Kazakhstan, the Caspian Sea, Azerbaijan, Georgia and further to European countries (see EDM, April 18, 19, 20). Another budding option, particularly for the land-locked Central Asian region, is to build north-south linkages to Iran’s overland transit network, which offers further connections to Turkey, the Middle East and Europe, as well as to Iranian seaports on the Persian Gulf and the Gulf of ​​Oman (see EDM, May 5).

For Russia, the growing challenges with maintaining the west-east routes across its territory have also incentivized Moscow to focus more on trans-regional north-south routes to Central Asia/the South Caucasus and, from there, to Turkey and Iran. By strengthening these transit corridors, Moscow hopes to counter the tightening economic sanctions and transit restrictions on Russia that the West adopted in response to the Russian assault on Ukraine. In this regard, one of the most important prospects for Russia is to strengthen the land and rail routes of the International North-South Transport Corridor (INSTC). While to the east of the Caspian Sea there is a working railway route from Russia through Kazakhstan and Turkmenistan to Iran, along the western shore of the Caspian, in the South Caucasus region, the linked railway networks of Russia and the Republic of Azerbaijan still lack a physical connection with Iran.

The Astara–Rasht–Qazvin railway, which will wind along the southwestern corner of the Caspian, forms a central link of the longer INSTC, a multi-modal route between India, Iran, Azerbaijan, Russia and Europe. The cross-border Astara (Iran)–Astara (Azerbaijan) section of the railway was officially inaugurated on March 29, 2018, while the Rasht–Qazvin section inside Iran was implemented on March 6, 2019. Therefore, the only remaining gap is a 164-kilometer railroad section from Rasht to Astara. Until this railway segment is finished, freight moving by train must be transferred to trucks and then back again.

In the latest development signifying growing regional prioritization for the Astara–Rasht–Qazvin railway and the INSTC more broadly, Iranian Roads and Urban Development Minister Rostam Qasemi visited Moscow on April 30, 2022. Following his talks with Russian Transport Minister Vitaly Savelyev, the two officials signed a comprehensive agreement on cooperation in the field of transportation. Both men noted the importance of establishing a railway connecting the Asian continent’s north and south, notably stressing the need to complete the missing Rasht–Astara portion of the INSTC as soon as possible (Sharghdaily, April 30).

The 164 km Rasht–Astara railway has faced years of problems in terms of construction and implementation. The main obstacle has been financing, particularly due to the United States’ sanctions on Iran. According to an earlier agreement between Iran and the Republic of Azerbaijan, both sides pledged to provide $500 million each to build the Rasht–Astara railway. And in 2016, the International Bank of Azerbaijan signed a deal with Iran on the allocation of a $500 million loan for this purpose (Tehran Times, June 12, 2016). However, in practice, this agreement and the loan were never implemented due to the comprehensive US sanctions on Iran’s banking network.

Nevertheless, the Iranian government is determined to implement this important railway project, which compares favorably along various metrics with a handful of other railway projects in the region. Notably, the Iranian-Armenian railway line from Meghri, Syunik Province, in southern Armenia, suffers from high costs and has not seen any progress since 2009. Whereas plans to restore Soviet-era east-west railway corridors in the South Caucasus following the Second Karabakh War (September 27–November 10, 2020) have stalled due to differences between Armenia and Azerbaijan over the interpretation of the ninth clause of their ceasefire agreement, brokered by Moscow. The construction and completion of the Rasht–Astara railway is, therefore, the only practical and accessible short-term prospect for Iran to connect to the South Caucasus. Its implementation will complete the last remaining section of the INSTC and create a physical rail link for the Republic of Azerbaijan, Georgia and Russia to Iran’s Chabahar port on the Oman Sea and Bandar Abbas on the Persian Gulf.

Another important issue for Iran is expanding its freight corridors to the Moscow-led Eurasian Economic Union (EEU) in order to take fuller advantage of the EEU-Iran Preferential Trade Agreement (PTA). In this regard, Iranian President Ebrahim Raisi last year said, during a tour of Gilan Province (where the two cities of Rasht and Astara are located), that railroad and other transit infrastructure projects, along with the purchase of roll-on/lift-off (ROLO) vessels, should be accelerated to boost intra-regional trade (Iranian Labour News Agency, May 25, 2022).

In this situation, Iran desperately needs to complete the Rasht–Astara railway. But since the Republic of Azerbaijan has been unable to fulfill its financial obligations due to sanctions, Tehran is turning to Moscow for support. Indeed, even prior to the aforementioned April visit to Russia by the Iranian transport minister, in January 2022 President Ebrahim Raisi traveled to Moscow, where the two sides finalized a previously agreed-upon $5 billion credit line for the completion of several development projects in Iran (Iran Online, January 22). Among those projects, Iranian Economics Minister Ehsan Khandouzi noted, would be the Rasht–Astara railway (Tehran Times, January 21).

About two months later, Russia’s large-scale re-invasion of Ukraine created problems for and restrictions on trans-Russian east-west transit routes across Eurasia, inducing Moscow to pay more attention to the development of corridors in the north-south direction. Tehran has sought to utilize this situation, stepping up efforts to attract Russian investment in the Rasht–Astara railway project. Russia is itself under ever more painful Western economic sanctions. But assuming Moscow can find the financial resource necessary to see the completion of Rasht–Astara, then the International North-South Transit Corridor in addition to the Middle Corridor may both end up being beneficiaries of the region-wide geopolitical reverberations caused by the Russo-Ukrainian war.