Garry Kasparov: “Heydar Aliyev patronized me; he was a shield protecting me.”

In an interview with Ukrainian journalist Dmitry Gordon, Azerbaijan-born 13th World Chess Champion Garry Kasparov talked about the support that Heydar Aliyev had given him, reminisced about his life in Baku and answered the question whether he missed the city of his childhood. “There were no national problems. My mother, the eldest of three sisters, married a Jew, the middle one an Armenian, the youngest an Azerbaijani. There was no such problem in Baku,” Kasparov said. “It was not like that in Tbilisi and Yerevan. Yerevan was almost entirely Armenian. Tbilisi was more multiethnic, but people spoke Georgian there. And in Baku, even many Azerbaijanis not only spoke but also thought in Russian. After all, Baku was an imperial city. That’s what made it different from many capitals.

“Do I miss the Baku of my childhood and youth? Nostalgia is always there. My father is buried in Baku. That’s where I was born and grew up. When the Chess Olympiad was held in Baku in 2016, I asked my friends from the American team to take pictures of the cemetery and of my home, where I was born. The apartment where I was born became a women’s clothing store…

Kasparov admits that Heydar Aliyev played a great role in his success in becoming world champion.

“Heydar Aliyev patronized me. This is the right word. He received me and my mother for the first time in 1979, when I won my first big victory in the Yugoslav town of Banja Luka. Obviously, I was already a big rising star. And Aliyev believed it was very important that the boy of Armenian-Jewish descent in Baku received support. All of Aliyev’s help from 1979 to 1985 was a shield protecting me. The Soviet system had no interest in replacing the Russian champion with a mutt from Baku. All the more so that many bosses, who were even tolerant in matters of ethnicity, felt that I could not be trusted, unlike the loyal Party soldier Karpov. And they were right. The spirit of free-thinking did slip in, it was obvious that I was a different breed. To quote Vysotsky, ‘I read other books as a child.’ 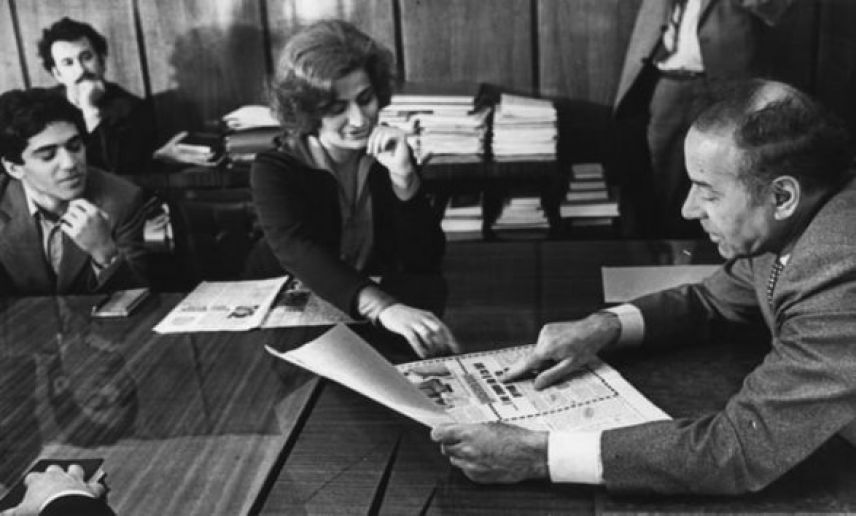 “That’s why Heydar Aliyev’s help was important, because it provided me with conditions for training. What is patronage? One can pave the road to championship by eliminating opposition and stifling opponents. Like the way Korchnoi was harassed during his match with Karpov in 1974. Or the problems that were created for me when I was rising to the top. And one can help by arranging a material and technical base, where people can train and where they can come to.

“Virtually the entire Soviet chess school was mobilized to support Karpov in his matches against Korchnoi in 1978 and 1981. And this is to a large extent how it went on from there. Obviously, the system didn’t fight me with the same ferocity it did Korchnoi, but it still fought me. The system of training and, most importantly, mobilizing grandmasters was like a conveyor belt.

“I wrote about it in my book. After I became the USSR champion in December 1981 and was already one of the strongest grandmasters in the world, I had to have some practice to prepare for an interzonal tournament. Clearly, I was one of the real contenders for the crown, based purely on the results, on the dynamics of my creative growth. But Nikolai Krogius, head of the Sports Committee of the USSR, simply told me: ‘We have one champion, we don’t need another. And you’re not going anywhere.’

“There were three big tournaments coming up, I had invitations to all of them, and I was told, ‘Karpov will go to all three. And you will go to a tournament in Dortmund, a side tournament.’ That’s where the intervention comes in. I approached Heydar Aliyev, and I was sent to one tournament out of three. If we are to see that as ‘criminal’, from Karpov’s point of view, why did they have to stop me from going anywhere in the first place? Did I not have the right, being virtually number two in the USSR, to go to one of the three tournaments, when I had the invitation?

“I went to Bugojno, won the tournament, and that helped me. Then there were three interzonal tournaments, in Las Palmas, Toluca and Moscow. I played in Moscow so there were no problems with my coaches being let out of the country. My mom, of course, was not allowed to go abroad, just in case she might stay there. We know this hostage system in the USSR. They would not let her out until 1983. My coach Alexander Nikitin was the coach of the Soviet national team, he was dismissed after a conflict with Karpov in 1976. He used to work for Spartak and wasn’t allowed to leave the country either. They would only let him out in 1983, too.

“That’s why I played the interzonal tournament in Moscow in 1982. Then there was the match with Belyavsky, and then that whole story with Korchnoi, when they tried to disqualify me. And again, Heydar Aliyev’s intervention helped.”