Geoeconomics of the Caspian Sea region

A new project, Caspian Digital Hub, is planned to commence at the end of 2021. The project will enable data transfer from Europe to Asia through data centers in Kazakhstan and Azerbaijan, create an open information society in Eurasia, and improve Internet services in the region. 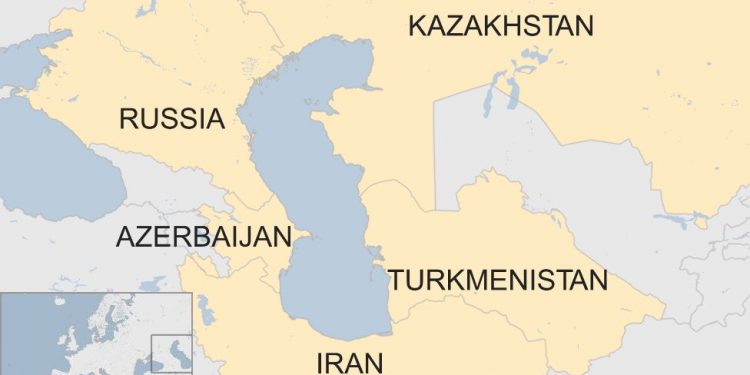 The Caspian Sea region consists of countries with complex economic and political relations. The region is replete with natural resources which mainly determine the economic health of the countries located near the Caspian Sea. The sea is bounded by five countries, while the broad Caspian Sea region encompasses more than just five of them. The littoral states are Kazakhstan, Azerbaijan, Turkmenistan, Russia, and Iran. Among the five countries, Kazakhstan has the longest coastline, while Iran has the shortest coastline. The 2018 Convention on the legal status of the Caspian Sea has granted 15 miles of territorial waters and 10 miles of exclusive fishing rights to each littoral state, solving a decade-long dispute over the status of the Sea. (1) In addition to those countries, Tajikistan, Georgia, Armenia, Kyrgyzstan, and Uzbekistan are generally considered to parts of the broad Caspian region. Due to its strategically important location, the region serves as a connection between Europe, Asia, and the Middle East. As a consequence, many other states, such as China and the US, try to influence it and maintain good economic and political relations with the region.

The economies of the Caspian region countries differ widely concerning their material wealth, economic health levels, and diversification levels. As most countries in the region owe their economic successes to their natural resources, they are not sufficiently diversified and face severe risks from fluctuations in commodity prices. This is probably the main weakness of the Caspian region economies. The infamous 2014 oil price crash has led to diminishing economic growth rates in many of them. Since then, the states have been employing various diversification policies to mitigate the risks of overreliance on resources. The ongoing shift to green energy may have even greater negative impacts on those economies unless they truly diversify.

The contribution of oil and gas to the GDPs of Kazakhstan, Azerbaijan, and Turkmenistan has been higher than 10%, and oil and gas exports accounted for more than 40% of their total exports. As a result of their strategic importance, two of these countries, Azerbaijan and Kazakhstan, have been able to attract the largest share of FDI in the Caspian Sea region. (2) Despite several instances of slow growth rates which were mainly caused by external factors, both economies have shown steady economic growth since independence. (3) (4)

It should be noted that the pandemic had a negative effect on the growth rates, and the economies are expected to recover soon. However, many fundamental issues may remain for a long while. Apart from the insufficient diversification problem, common problems include corruption, overreliance on remittances from foreign countries, mainly from Russia, and underutilization of capital. Russia, the largest economy of the region, is also the main import and export partner of most of the countries in the region. This explains why the 2014-2015 financial crisis in Russia had such a significant impact on the economies of surrounding countries. Additionally, landlocked countries in the region, such as Armenia, Tajikistan, and Uzbekistan, do not get the benefits of being next to the sea, and this reflects on their economies to a certain degree.

However, the Soviet legacy still persists in some of the Caspian states. The lack of economic freedom is still a problem in many of the Caspian countries. According to Caspian Policy, Azerbaijan has had the greatest change (35.4) in its economic freedom score over the last 25 years. (8) The country has achieved the result mainly by becoming an important transit road, joining the WTO, and improving diversification. Meanwhile, the economic freedom score of Russia changed by 7.5 only, which was the lowest in the region. Currently, Georgia has the highest economic freedom score, followed by Armenia. Reforms made in both countries have proven effective. The development of the Armenian economy has been especially hampered by the blockade created as a result of its long-standing conflict with Azerbaijan. Kazakhstan is assumed to have a significant potential for a better economy, though the actions taken by the government and the lack of diversification have prevented the economy from realizing its potential. The remaining countries, namely Turkmenistan, Kazakhstan, Kyrgyzstan, Tajikistan, and Uzbekistan, are suffering from the lack of a strong legal framework, and it is thought to be among the main factors that hinder development. Georgia seems to be better than the rest of the Caspian countries in terms of Rule of Law and Control of Corruption, according to Worldwide Governance Indicators. (9)

Except for Georgia and Armenia, all Caspian countries are members of The Economic Cooperation Organization (ECO). The organization is aimed to form a single liberalized market for the member states and enables the states to sign favorable bilateral free trade agreements with each other. (10) Additionally, except Iran, all countries in the region are members of the Commonwealth of Independent States (CIS).

Natural resources are the main source of income for many countries in the Caspian region. The Caspian region economies are considered “resource-based” economies as most of them depend heavily on mineral wealth. (11) According to British Petroleum, the five major countries of the region, Iran, Russia, Azerbaijan, Turkmenistan, and Kazakhstan hold nearly 8.4%, 32.3%, and 17.8% of the world’s total oil, gas, and coal reserves, respectively. (12) Additionally, the same countries, are responsible for over 5% of the world’s total electricity production. The Caspian Sea itself contains around 48 billion barrels of oil and trillion cubic meters of gas reserves. (13) Natural resources of the Caspian Sea play an especially crucial role in the economies of Azerbaijan, Kazakhstan, and Turkmenistan. For example, the Caspian Sea is responsible for nearly 100% of Azerbaijan’s total oil and gas production. However, its hydrocarbon resources do not contribute significantly to the economies of other surrounding countries, such as Iran and Russia. It has been estimated that oil and gas produced from the Caspian Sea comprise nearly 0% of Iran’s total oil and gas production and almost 1% and 2% of Russia’s total oil and gas production, respectively. (14) Apparently, the region does not fully depend on the Caspian Sea. Despite such a low share of the Sea in Iran’s economy, Iran has 16% of the total gas reserves of the world. (15) It is the third largest gas producer in the world. (16) Similarly, Russia is the third largest oil producing country in the world. (17)

Apart from its fuel resources, the Caspian countries are rich with non-fuel resources too. The region is known to have a considerable amount of hydroelectricity resources. Valuable metals are also among the vast resources of the region. Gold, silver, iron ore, zinc, copper, uranium, bauxite, cotton, and caviar are among the most valuable and common resources in the region. Nearly 90% of the world’s total caviar production comes from the Caspian Sea. (18) According to the World Gold Council, three of the world’s top twenty gold producing countries are from the Caspian region. (19)

There are around a dozen oil and gas pipelines carrying the Caspian oil and gas to different parts of the world, mainly Europe, East Asia, and South Asia. Exports to Europe are done through Baku-Tbilisi-Ceyhan, Caspian Pipeline Consortium, Uzen-Atyrau-Samara, Baku-Novorossiysk, Central Asia Center gas pipeline system, Kazakhstan Caspian Transportation System, Baku-Tbilisi-Erzurum (as known as the South Caucasus Pipeline), Trans Adriatic Pipeline, and Trans-Anatolian Pipeline. The last three pipelines are parts of the Southern Gas Corridor. Exports to East Asia are carried through Kazakhstan-China Pipeline and Central Asia-China Gas Pipeline. Another major pipeline, Turkmenistan-Afghanistan-Pakistan-India Pipeline (TAPI), is going to be used for exports to South Asia. The pipeline would carry Turkmen oil to Pakistan and India and gain Afghanistan transit revenues. (20) Its completion is expected in 2022. (21) Another important and controversial project, Trans-Caspian Pipeline (TCP)has been proposed, although Russia and Iran have heavily criticized it citing its potential dangers as some of the reasons. The project is planned to transport natural gas from Turkmenistan and Kazakhstan to European countries, making the country less dependent on the current transit countries, namely Russia and Iran.

Trans-Caspian International Route (TITR) and Transport Corridor Europe-Caucasus-Asia (TRACECA) are considered to be the main transport programs that involve the region. TITR (as known as the Middle Corridor), created by Georgia, Kazakhstan, and Azerbaijan, connects Southeast Asia, China, the Caspian Sea, Georgia, and Europe. The TITR reduces shipping time by three times and decreases the likelihood of the risks that are caused by long delays. The TRACECA program consists of 12 ports and 22 land-based routes. (22)

Another transportation route, the Baku-Tbilisi-Kars railway connects Azerbaijan, Georgia, and Turkey. BTK, the shortest rail link between Europe and Asia, does not have a passenger service for now, but it is used by several countries, including, Turkey, Kazakhstan, and China, for freight transportation. BTK is expected to transport 1 million passengers and 6.5 million tons of freight annually. (23)

A new project, Caspian Digital Hub, is planned to commence at the end of 2021. The project will enable data transfer from Europe to Asia through data centers in Kazakhstan and Azerbaijan, create an open information society in Eurasia, and improve Internet services in the region. (24) The fiber optic links that will transfer data are going to be built along the bottom of the Caspian Sea. The length of the cable is expected to be almost 400 km.

Russia remains the main military equipment provider in the region. The country is the second largest military hardware exporter in the world and has imported only a limited of amount equipment from others including Israel, and France. (25) Between 2016 and 2020, Russia accounted for 89% and 17% of total arms imports of Kazakhstan and Azerbaijan, respectively. (26) Meanwhile, arms imports from Russia represented 94% of Armenia’s total arms imports. According to Stockholm International Peace Research Institute, Armenia and Azerbaijan were responsible for 0.3% and 0.7% of global arms transfers.

Among other major providers of military equipment to the region are Turkey, China, and Israel. Turkey is among the top arms exporters of Azerbaijan, Turkmenistan, Uzbekistan, while China exports to Uzbekistan and Turkmenistan. (27)

*About the author: Ali Mammadov has earned a Bachelor of Science degree in Economics and Finance at George Washington University. Currently, he is a Visiting Researcher at Economics Research Institute and writes blog posts on his Medium account. He is going to pursue a Master of Arts in International Relations at Johns Hopkins University School of Advanced International Studies.