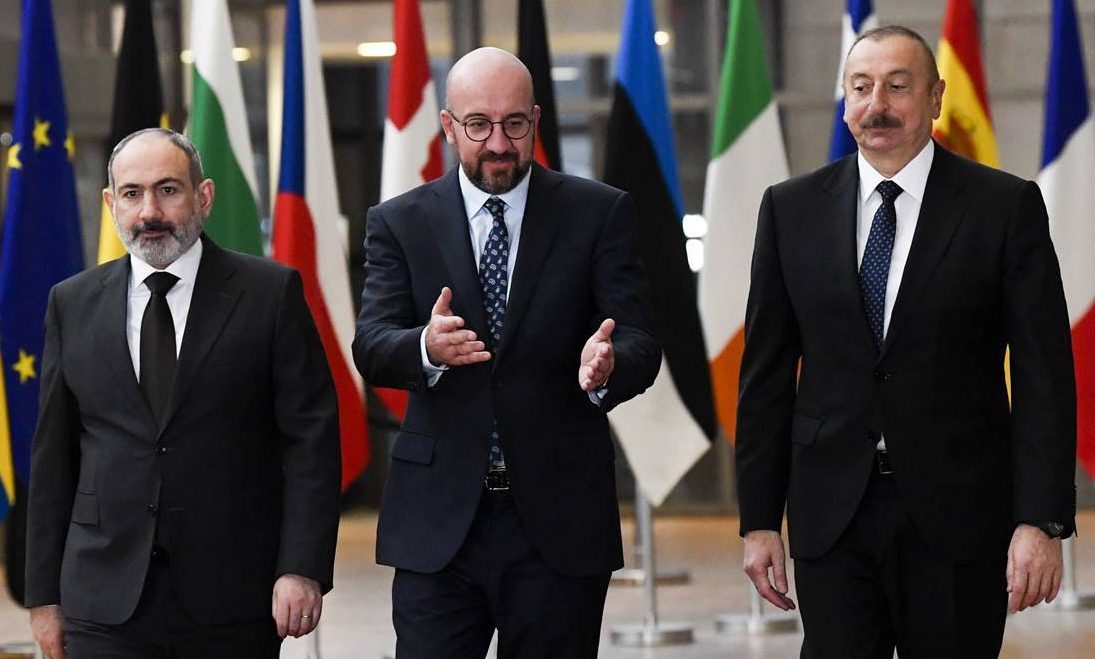 In Moscow on December 6, the Trilateral Working Group established pursuant to the November 2020 Trilateral Statement (called a “ceasefire accord” by Armenia and a “capitulation document” by Azerbaijan), which put an end to the Second Karabakh War, held its 11th meeting at the deputy prime minister level. Despite the issuance of an elaborate diplomatic statement detailing the various policy spheres in which discussions were held, Armenia’s prime minister, Nikol Pashinyan, was quick to state publicly that “no concrete results” had been reached.

This would not be so significant, except for the fact that Pashinyan has also put into jeopardy a continuation of the Brussels process, initiated by President of the European Council Charles Michel at the end of last year. He did this by issuing an extraordinary demand, earlier this month, that French President Emmanuel Macron should be present at the meeting in Brussels with Azerbaijani President Ilham Aliyev, set for December 7 (after a postponement from November). The meeting was cancelled after Aliyev refused to accept this condition. No further meeting is foreseen at present.

Macron had been present at a meeting that took place outside the framework of the Brussels process in Prague on October 6, with Michel, Aliyev, and Pashinyan. This meeting occurred during the kick-off of the European Political Community (EPC), created following a proposal by Macron himself. The press coverage from that quadrilateral meeting raised great hopes for the normalization of Armenia-Azerbaijan relations and the eventual conclusion of a peace treaty. The Brussels process, however, has never had any facilitator other than Michel.

Pashinyan’s demand was unprecedented and without evident foundation. It is difficult to avoid the impression that it was designed to torpedo the process. Summits in Brussels took place in the trilateral format with Michel on December 14 last year, and this year on April 6, May 22, and August 31. The November summit, delayed until December, was decided and agreed upon at the August 31 meeting, not in Prague, which was a one-off meeting on the sidelines of a separate multilateral summit convened for other purposes.

The contention by Armenian figures that Azerbaijan expressed agreement to a quadrilateral format in Brussels, is laughable. Of all three co-chairs of the defunct Minsk Group, France is the one to which Azerbaijan would never agree. Despite the requirement of impartiality imposed by its putative co-chairmanship of the Minsk Group, France consistently took sides in the conflict against Azerbaijan not only in the post-war period but during the war itself.

Thus in September 2020, while the Second Karabakh War was still raging, Macron blamed Turkey for “disinhibiting [décomplexant] Azerbaijan regarding what would be a reconquest of Upper Karabakh, something that we would never accept,” and to prevent which “France will play its role” on behalf of “Armenia and Armenians.” More recently, Macron gave an interview two months ago in which he criticized Azerbaijan, while France’s Senate adopted yet another resolution against Azerbaijan urging Paris to recognize the supposed “independence” of the so-called “Nagorno-Karabakh Republic.” This is a declaration that goes beyond even the now-muffled irredentism of official Yerevan.

As a result of such developments, the Brussels process is, at a minimum, stalled. The Moscow process, meanwhile, where Russia is the mediator between Armenia and Azerbaijan, and which was launched with the November 2020 Trilateral Statement, has a formally better-developed, interministerial structure co-chaired by deputy prime ministers of the three countries. Yet the Moscow process has itself been mainly stalled for the last year, ever since the first meeting in Brussels a year ago because both Armenia and Azerbaijan seemed to prefer the EU forum with Michel. 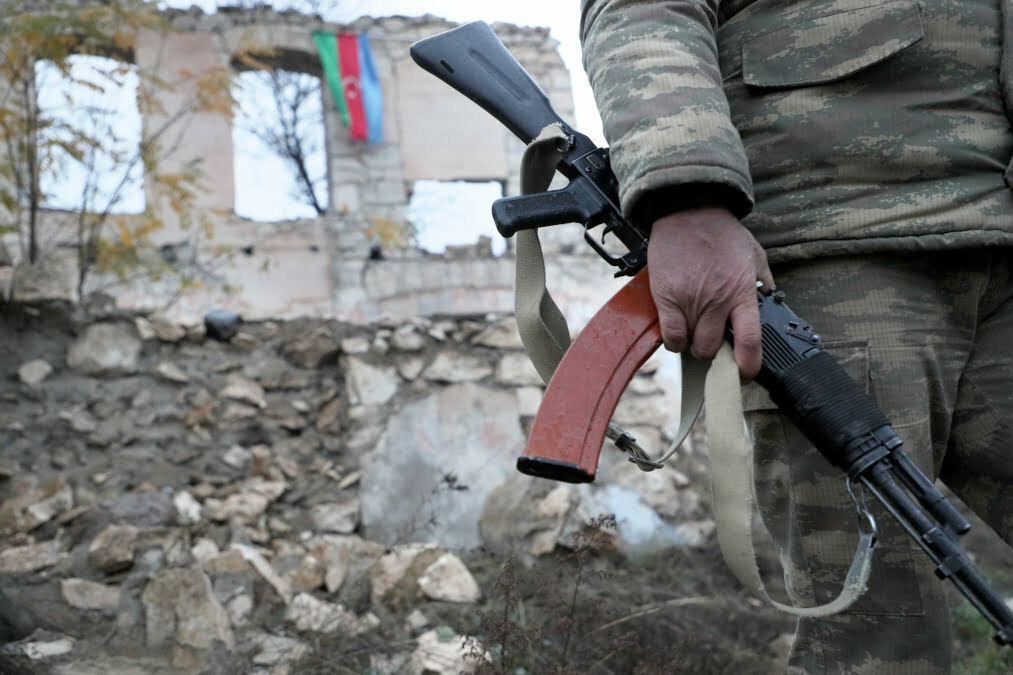 And indeed, besides sending a short-term delegation to monitor the border from the Armenian side a few weeks ago, the EU has done much more also to promote “Track II” diplomacy. Most notably, perhaps, in April this year, the Joint Armenian-Azerbaijani Liaison Group proposed 30 confidence-building measures in the short, medium, and long terms in support of efforts to establish peace in the region. The developed institutional capacities of different functional bureaucracies of the EU make it uniquely well-placed to act in support of these initiatives.

Notwithstanding that both these peace processes are for the time stalled, it is not excluded that the Zangezur corridor is sooner or later—and even sooner rather than later—constructed, even against Armenia’s recalcitrance. That is because this corridor is absolutely in Russia’s interests; and Russian state trusts own and operate the railway system, the gas distribution, the banking system, and other critical infrastructure throughout Armenia.

In this connection, it is worthwhile to dispel a myth about the proposed Zangezur corridor. Iran and Armenia pretend that it would be extraterritorial and even part of Azerbaijan itself. This simply is not the case. It is analogized to the Lachin corridor inside Azerbaijan, which is neither extraterritorial to Azerbaijan nor part of Armenia. Indeed, Russian border guards would provide security for the Zangezur corridor, just as they now provide security for nearly all of Armenia’s borders with Azerbaijan.

At the meeting of the Russian-led Collective Security Treaty Organization (CSTO) last month, Pashinyan famously refused on November 24 to sign the conclusions of the final document because he was unhappy with the promises and guarantees that were not granted him in preparatory closed-door meetings. Two weeks later, the CSTO has still not yet finalized its draft decision on assistance to Armenia.

At the same meeting, Pashinyan is reported to have complained to Russian president Vladimir Putin that there were insufficient funds in the Armenian state budget to construct the Zangezur corridor. Part of the reason for this is the accelerated expenditures that Pashinyan has instituted for the purchase of new arms systems and weaponry, notably from Iran. Practical contacts between leaders of the Armenian and Iranian military-industrial complexes have reached a new level of cooperation since the beginning of the year.

But also, Pashinyan may simply have been telling Putin, in so many words, that if Russia wants the corridor, then Russia should pay for it and even build it itself. And this appears not to be out of the question. Azerbaijan’s president is reported to have said, toward the end of November, that according to his last discussions of the Zangezur corridor with Russian officials, “I don’t think that Armenia is capable of blocking this corridor,” and moreover that Iran would not block it because of Iran’s “interest in regional communication projects[, which] are not directed against anyone.”

The question finally arises whether Pashinyan means to sabotage the peace negotiations in the long term, and whether he is now pursuing the so-called “Oskanyan doctrine.” This eponymy refers to Vartan Oskanyan, who was Armenia’s foreign minister from 1998–2008, i.e. during the presidency of Robert Kocharyan. It was during that decade that the so-called “Madrid Principles” were negotiated with Azerbaijan through the mediation of the then-functional OSCE Minsk Group.

Oskanyan recently provided the Armenian press with an article containing his views on present-day events. In it, he revived his insistence on Armenia’s territorial claims to Karabakh, pretending that the question of its “self-determination” had not been resolved on the ground, as if the results of the Second Karabakh War had not rendered the Madrid Principles obsolete, indeed as if literally every state in the world did not recognize the territory as an integral part of Azerbaijan.

All these moves understandably raise doubt in some people’s minds about whether Pashinyan even intends to make peace or not. His behavior gives the unfortunate impression of preparing for a new war in the future. Indeed, in September, the Armenian press reported a press leak from someone in the room, when Pashinyan told members of his parliamentary group that Armenia had to maintain the stalemate “for at least two years … until [Armenia’s] army is rearmed.”

One of the results of all these developments, which won’t please either Yerevan or Moscow, has been moves toward a new era of close cooperation between Baku and Washington, especially in the military sphere. After a strong presence in the region during the first 20 years of the post-Soviet era, the US gradually lost interest in Azerbaijan and the South Caucasus generally, especially after the US-sponsored rapprochement between Armenia and Turkey failed more than a dozen years ago.

Thus, while Iran and its ally Armenia ramp up threats against Azerbaijan, and while Russia is preoccupied with the quagmire of its invasion Ukraine, official Baku is naturally continuing to look to still other parties, including the Americans, in pursuit of “strategic hedging” so as to balance its diplomacy and assist in countering direct and indirect regional threats.

Robert M. Cutler, Fellow at the Canadian Global Affairs Institute and Director of the Regional Security Program at Strategy International. Mr. Cutler is a regular contributor to NE Global, commenting on regional affairs related to the Caucasus and the wider Near East.