The first question is: What did it include? What could the Indians supply to Yerevan that Armenia was desperately lacking? 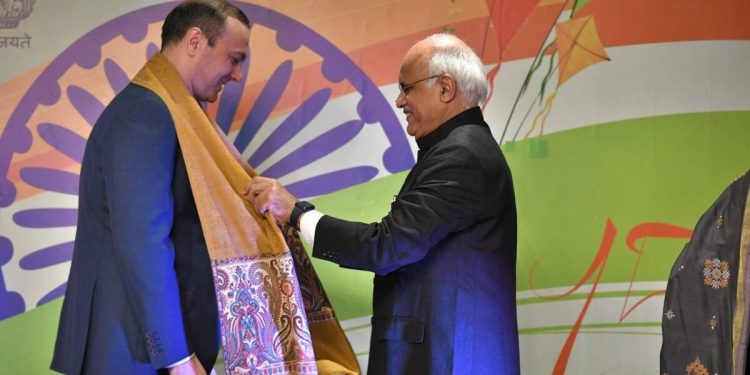 Armen Grigorian (center) takes part in an event dedicated to the 75th anniversary of India's independence in Yerevan on August 15, 2021.

“India had come close to airlifting a cache of arms to Armenia. But the war effort was so poorly managed that the administration in Yerevan, operating without a command structure, was unable to figure out how to receive the materiel,” British weekly The Spectator reports.

The quote is from a recent large article exuberantly titled “Can Armen Sarkissian save Armenia?” by Indian journalist Kapil Komireddi. The author is known for his pro-Armenian position and is close to the Indian ruling circles. Therefore, like any pro-Armenian advocate, he is prone to excessive chattiness, political impudence and verbal incontinence about things that should be kept silent.

“Any enemy of Turkey, Pakistan and Azerbaijan is our beloved friend who deserves a friendly embrace and financial assistance.” This axiom, cherished by the authorities of modern India steeped in Turkophobia and Indian nationalism, has long been known to the world. But perhaps for the first time, thanks to Kapil Komireddi’s loose lips, we get a chance to learn how deadly New Delhi’s plans in this regard can be.

The British journalist of Indian origin says directly that India was willing to supply arms to Armenia to use against Azerbaijan when Baku was fighting the Liberation War. More than that, the first batch of lethal cargo was already packaged and ready for dispatch.

The first question is: What did it include? What could the Indians supply to Yerevan that Armenia was desperately lacking?

The range of Soviet/Russian arms in Indian depots has been extraordinarily wide and varied since the 1980s. We are talking not so much about heavy weaponry, such as tanks and artillery systems—try airlifting those to Armenia, the Indian heavy military transport aviation, which is in its infancy, certainly would not have the capacity to do that—as about ammunition, of which Yerevan suddenly found itself in dire shortage. Bold entrepreneurs at the Armenian Defense Ministry had gotten carried away selling cheap ammunition supplied by Russia. They peddled it wherever they could, from Jordan to Lebanon. Armenian patriotism and the hysterical #KarabakhIsArmenia were one thing. But a big wad of dollars for the contents of the depots they sold to the detriment of the national defense capability is another thing, you see. It was to make up for this deficit that they appealed to India with tears in their eyes: Muslim extremists are attacking us, help us in any way you can to save the Armenian-Aryan civilization.

That evoked a most fervent response from New Delhi. “Azerbaijan is Turkey’s ally, Turkey is Pakistan’s strategic partner, Krishna himself is blessing us to help Yerevan here,” India reasoned and quickly boxed the deadly cargo. But then they were hit with the Armenian factor.

Armen Sarkissian, as portrayed by Kapil Komireddi, is an epic hero. Something between Julius Caesar and King Leonidas with his three hundred Spartans rolled into one. The kind of hero that can give one hell of Mahabharata and Brahmaputra to “hordes of Turkic barbarians” and preserve the borders in the South Caucasus in favor of the ancient Armenian-Indian civilization, which gave the world dolma and toilet bowls, while he is at it.

The one thing he could not do was conquer the Armenian chaos. There were no people in Yerevan who could organize the reception of military aid from India at a time that was the most critical for the Armenian political elite. Indian planes carrying ammunition for the “Armenian lions” never took off. The result was their epic defeat…

Let us dry the tears brought by this tragic story of Yerevan’s liquid, foul-smelling fiasco in its cooperation with India. New Delhi should get used to the idea that this is how any of their joint plans with Yerevan will end. And we should realize that we have no friends in India under the current regime. The hatred for the Azerbaijan-Turkey-Pakistan alliance is off the charts there.

Narendra Modi and his regime will do their best at every opportunity to make our enemies stronger. It doesn’t matter whether it is with weapons or with money. The Indian nationalists and the Armenian nationalists are so intertwined that the Kama Sutra itself would blush. They will not miss a chance to pour oil on the smoldering fire in the South Caucasus.