Historic developments are taking place in Armenia-Azerbaijan relations, but the signing of a peace treaty will likely take a longer time

The quick implementation of some of the issues agreed by president Aliyev and prime minister Pashinyan at their meeting in Brussels facilitated by the president of the European Council, Charles Michel, can be described as truly historic. 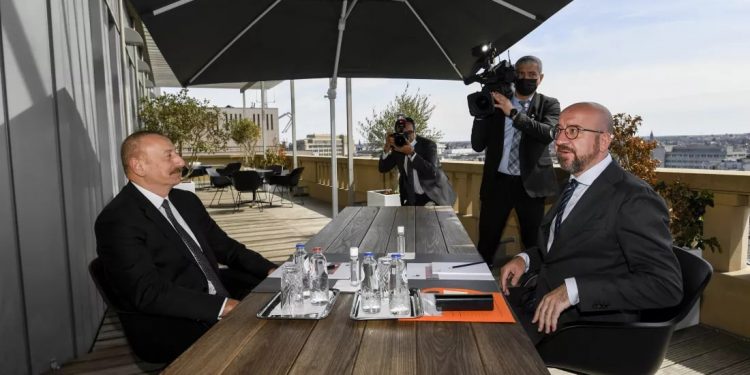 EU Council president Charles Michel held bilateral talks with the leaders of Azerbaijan and Armenia, before the three convened for a trilateral meeting on 22 May 2022. It was a hot day in Brussels and president Michel invited his guests on the terrace of the Consilium Building (picture courtesy of the press service of the European Council).

But “but the signing of a peace treaty will likely take a longer time, and necessitate an agreement not only between Baku and Yerevan, but also between Moscow and Brussels”, he adds.

On May 22, the leaders of Armenia and Azerbaijan met in Brussels with the mediation of European Council President Charles Michel to discuss the peace process. It is worth noting that since the beginning of this year, the representatives of the two South Caucasian republics have met exclusively via the mediation of the EU, while the only Russia-mediated meeting – that of the foreign ministers held on May 12 –  took place on the sidelines of another major event and brought about no novelty in the negotiations. The Brussels summit, however, delivered some very important outcomes which, if implemented, will constitute a critical breakthrough in the peace process.

First, after a long period of negotiations, Armenia and Azerbaijan agreed on the transportation routes, including the Zangazur corridor. It is worth recalling that the sides declared the first success in the negotiations over this corridor last year when they met in their first EU-mediated summit on December 14. Then the Armenian and Azerbaijani leaders agreed only on the railway connection passing through the Zangazur corridor but failed to agree on the highway along the same route. Baku then insisted that the border and customs regulations to be applied to the highway along the Zangazur corridor should be applied also to the Lachin corridor, which connects Armenia with Azerbaijan’s Karabakh region under the temporary control of Russian peacekeeping mission.

This remained a bone of contention in the negotiations about the transportation routes until recent weeks. As late as in April, President Aliyev complained about Armenia’s refusal to cooperate in the opening of highway connections via its southern territory.

Importantly, the Brussels summit of May 22 has apparently succeeded to resolve this dispute as the next day, in his post-summit phone talk with Turkish President Recep Tayyip Erdogan, President Aliyev declared that Armenia and Azerbaijan had agreed on both highway and railway connections.

“We agreed on the opening of Zangazur corridor”, he stated, but did not give the details of the agreement. Thus, it is still unclear on which terms the sides agreed in  the discussions regarding the border and customs regulations of this corridor, and whether it will make any changes to the existing situation along the Lachin corridor.

Another important outcome of the Brussels summit is concerning the border delimitation and demarcation process. President Aliyev and Armenian Prime Minister Nikol Pashinyan reiterated their readiness to establish an international commission to deal with this issue. The next day, both sides announced the composition of their respective state commissions. In a way that can be considered historic for the conflict between the two countries, especially since the following day (Tuesday, May 24) the two Commissions met on the Armenia-Azerbaijan state border and launched their work.

The sides had first reached an agreement on the establishment of a border commission in their Russia-mediated Sochi summit on November 26, 2021. However, they failed to do it by the end of that year as announced by Russian President Vladimir Putin in the press conference following the summit. Similarly, they could not establish the commission by the end of April as they planned to do at the Brussels summit of April 6. President Aliyev has recently stated that the Armenian side declined to hold the meeting on April 29 and in early May to establish the commission.

However, the EU-mediated efforts eventually succeeded to realize it – which raises the hope that the peace process would deliver positive outcomes in other dimensions as well. There are, however, major challenges posed to this process, particularly derived from the internal political situation in Armenia, and the reaction of the Russian side to developments in the peace process.

Pro-Russian opposition groups in Armenia have been protesting against Pashinyan’s government almost every day since the Brussels summit of April 6. They blame the government for “ceding Karabakh to Azerbaijan”. Although they have failed to mobilise sufficient numbers of people to cause a government or policy change, their connection with Russia generates concerns about their potential.

It is important to note that Russia does not conceal its resentment against the growing role of the EU in the post-war peace talks between Baku and Yerevan. The spokesperson of Russia’s Ministry of Foreign Affairs blatantly expressed this resentment after the April 6 summit in Brussels accusing the EU of “shameless attempts” to hijack of the Armenia-Azerbaijan peace process. In Azerbaijan, many observers and media agencies believe that the failure of the implementation of the meetings planned on April 6 was related with the intervention of Russia and the Moscow visit of Prime Minister Pashinyan in mid-April.

Therefore, the reaction of Russia following the May 22 summit is seen as a critical variable. Russia has a military foothold in the Karabakh region of Azerbaijan, the heart of all this conflict between Baku and Yerevan. The local separatist groups in Karabakh hope and call for Russia’s support to prevent any deal between Armenia and Azerbaijan that would settle the dispute recognizing Azerbaijan’s sovereignty over the region. Various reports demonstrate that Russia supports these separatist groups and keep them as a trump card against Baku and Yerevan if the peace talks spiral out of its control.

The press statement of President Michel following the May 22 summit demonstrates that the sides are primarily focused on the border and transportation issues in the EU-mediated format and continue to leave the fate of the Karabakh region to future negotiations. Following the April 6 summit, Prime Minister Pashinyan had stated that he found it more appropriate to discuss the situation in the Karabakh region with the participation of the Russian side, since it is present on the ground. This strategy, apparently, is still prioritized by the Armenian leadership.

This uncertainty in the situation is a major challenge to a comprehensive peace treaty which President Michel following both the April 6 and May 22 summits declared is on the agenda. Thus, at this critical juncture, the resolution of the issues related with transportation routes and border delimitation seems to be more accessible, but the signing of a peace treaty will likely take a longer time, and necessitate an agreement not only between Baku and Yerevan, but also between Moscow and Brussels.